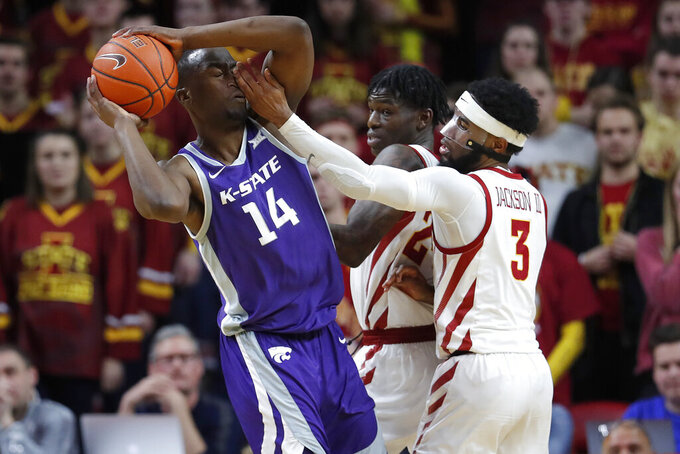 But the victory may prove to be costly for the Cyclones (10-13, 3-7 Big 12), who led by as many as 21 points and played the final 13 minutes, 46 seconds without star guard Tyrese Haliburton — who re-aggravated a wrist injury seconds before halftime. The sophomore from Osh Kosh, Wisconsin, will have an MRI tomorrow, he said.

“Went to make the block and our feet kind of got tangled up,” said Haliburton, who's widely considered to be a first-round NBA Draft pick this season if he chooses to go pro. “Obviously human instinct, I put my hand down to save myself and it’s the same hand.”

Haliburton scored nine points in the first half — all on 3-pointers. He said the decision to try to play in the second half wasn't a difficult one.

DaJuan Gordon scored 10 points for Kansas State, which missed its first 11 shots of the game.

“We told our guys they play well here,” Kansas State coach Bruce Weber said. “We just said you've got to be determined early. We've got to have a great defensive effort. Part of it was the turnovers and we missed some shots. Not very sharp to start the game, no doubt.”

Young shined for Iowa State from start to finish, even though losing Haliburton — who had played every minute of 10 previous games — was hard.

"It's different," Young said. “He's used to playing 40 minutes a game. When one guy goes down, somebody has to step up. We've got to roll with it.”

Kansas State: The Wildcats fell behind early for the sixth time in the past nine games and it's become a troubling trend. “It's just Groundhog Day time and time again,” Weber said. “The problem is Bill Murray can change it. We can't change it. When you’re scrambling back like that, you're exerting a lot of energy. That makes it tough.”

Iowa State: The Cyclones snapped a four-game losing streak and now stand alone in eighth place in the conference standings — one game back of TCU and Texas, which are tied for sixth. Iowa State shot 19-for-20 from the free throw line and won at home for the third time in the past four games.

Iowa State big man George Conditt coupled energy with production off the bench. The 6-10 sophomore scored eight points and grabbed a season-high nine rebounds. He also had two blocked shots after notching just one in the previous seven games.

Iowa State used a 17-0 run to build its 21-point lead in the first half, but Kansas State closed the half with a 12-0 run to pull within nine points. The Cyclones missed their last 10 shots of the half. The Wildcats missed their first 11 shots of the game.