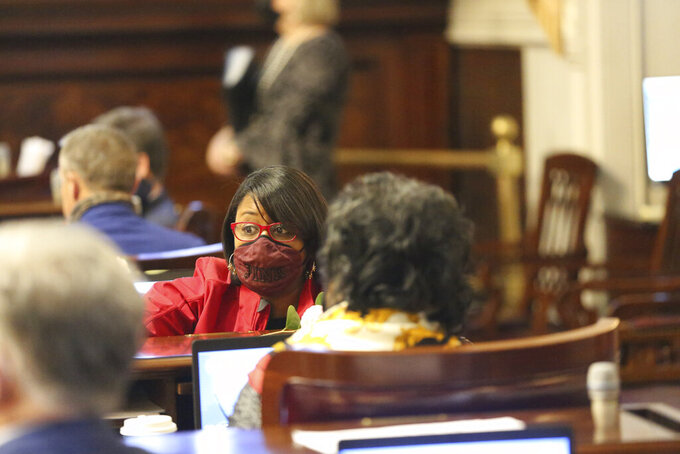 State Rep. Krystle Matthews, D-Ladson, speaks to fellow lawmakers on Wednesday, March 3, 2021, in Columbia, S.C. Matthews said many of her colleagues don't listen to Black lawmakers when they call for diversity in the state's judges and college and university trustees. (AP Photo/Jeffrey Collins)

COLUMBIA, S.C. (AP) — The University of South Carolina’s first African American basketball star, a former NBA veteran running unopposed with the governor's backing, would appear to be a slam dunk for election to a full term on the school’s Board of Trustees.

But Alex English still had to sweat out his reelection somewhat on Wednesday after a conservative lawmaker insisted on a vote in which 10 Republicans voted against the former pro athlete, just one of two Black members of the 21-member board. About two dozen Republicans in the House and Senate didn't vote at all.

English was one of the first Black players at the University of South Carolina in 1972 and perhaps its most famous. He played 15 seasons in the NBA, most prominently for the Denver Nuggets in the 1980s and eight years as an all-star. Now 67, he sought reelection to a term that expires in 2022.

Black lawmakers said the vote is just the latest example of a number of Republicans in the General Assembly dismissing diversity when they elect judges and trustees. More than one in four people in South Carolina are Black.

The General Assembly elected two dozen judges last month and none were Black. In 2019, legislators selected 44 judges. Just two of the races were contested and both times, a Black candidate lost to a white one. A number of African American lawmakers briefly walked out in protest. Of the 61 judges on the supreme, appeals or circuit courts in South Carolina, just nine are Black.

“Even though there was no other option other than Alex English, some of my colleagues still felt compelled to vote against him. And the drama and machinations they go through to do that is really kind of — special, shall we say," said Rep. Gilda Cobb-Hunter, the House's longest-serving member after the vote Wednesday.

There was another trustee candidate running unopposed at Lander University in Greenwood and a vote was not called. A former House member won the only contested seat at The Citadel 154-2, while English won his University of South Carolina seat 112-10 with 34 lawmakers who voted in the contested race choosing simply not to vote in English's contest.

“It shows how much work is left to do in South Carolina,” said Cobb-Hunter a Democrat from Orangeburg first elected in 1992.

English served as a trustee at his alma mater for a few years after his pro career, then went into coaching. Last summer, Gov. Henry McMaster appointed him back to the board after a member left to run the university's law school.

English promised to push for diversity and fiscal responsibility.

“We’ve got to make our faculty and staff resemble the population of the state, you know. And I think we have to do the same thing with the students,” English told lawmakers in a February screening hearing.

About 10% of students are Black at the University of South Carolina's main campus in Columbia.

When the race was still contested, some Republicans worried about Twitter posts English has since deleted supporting efforts to change the names of campus buildings away from segregationists or other historically divisive people, including former U.S. Sen. Strom Thurmond.

Rep. RJ May voted against English, saying he wished candidates in all trustee races didn't drop out before a vote happens. May, A Republican in his first year in the House, said he wants the best judges and trustees in the eyes of the people in his district, in the conservative western suburbs of Columbia.

“I don't think Mr. English represents their conservative values,” said May, a University of South Carolina graduate who said he now wishes English “all the luck in the world for the school I love.”

English said in a statement he will always support students using their voices to make change. But as a trustee, he would listen, then eventually defer to the Legislature under a state law that protects the names of historic buildings from being changed.

One of the newer African American lawmakers in the House said conservatives’ idea of diversity is allowing one or two Black candidates to rise to the forefront whether or not Democrats want that person.

“We are not a monolith. We have standards. We have criteria. We have things we are looking for as well,” said Rep. Krystle Matthews, a Democrat from Ladson who was elected to the House in 2018.

Matthews said it gets tiring to fight tooth and nail for every Black candidate, but the lack of diversity falls the hardest on an African American who finds himself in court or herself at a university that doesn't understand her upbringing.

“While it is high level up here for us, somebody will have to deal with the details and that will be the people," Matthews said.

This story corrects the English played for 15 NBA seasons, not 16.