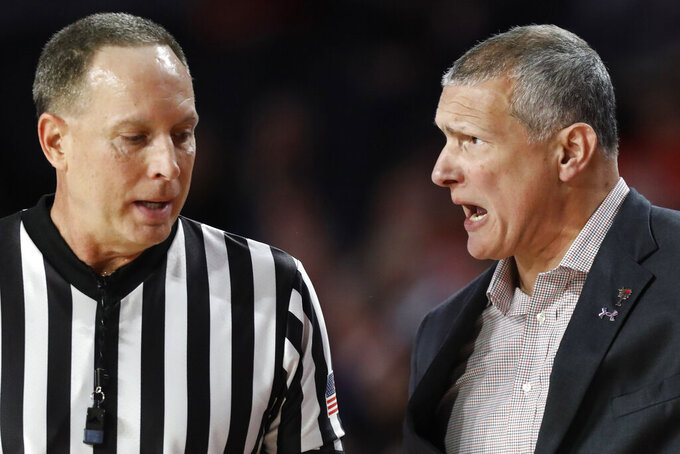 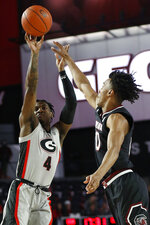 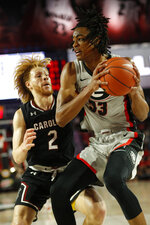 ATHENS, Ga. (AP) — Now that Chris Silva and his coach are on the same page, there may be no stopping the South Carolina forward.

Silva and A.J. Lawson scored 19 points apiece as South Carolina ended a two-game losing streak with an 86-80 win over Georgia on Saturday.

Over the last three games, Silva has scored 32 against Auburn, 15 against Oklahoma State and 28 against No. 1 Tennessee. The two games before that he scored nine total.

"I saw his growth offensively in the preseason," Martin said. "But I put too much pressure on him because we weren't playing well. We had two new guards who did not know how to play. We had a conversation. I needed to understand him."

The Gamecocks (11-10, 6-2) never trailed, but had to fight off repeated comeback attempts by Georgia. The last one climaxed when a pair of free throws by Georgia's William Jackson made the score 83-80 with just 1:06 to play, but the Bulldogs could not get the rebound off a missed shot by Carolina's Hassan Gravett.

Georgia fouled Lawson, who hit two free throws. Georgia then missed three 3-point attempts on its next possession and ran out of time.

South Carolina scored the first seven points of the game and built a 14-4 lead when Lawson hit a 3-pointer from the corner at 14:02 of the first half. It was 22-8 by the time Silva scored on a breakaway dunk with 9:39 to play in the half.

The Gamecocks' man-to-man defense was stifling. All of Georgia's first eight points were second-chance points. The Bulldogs had failed to generate a point off its offense until 9:00 to play when Okbeide hit two free throws after being fouled on a drive.

But Georgia Coach Tom Crean said the Bulldogs lost because of their poor defense, not their inability to score.

The Gamecocks briefly pushed the first-half lead to 15 on another 3 by Lawson with 6:42 to play. It was still a 14-point lead with 3:27 to go in the half after a 3 by Tre Campbell.

But Georgia scored nine straight points, capped by an acrobatic tip-in by Jordan Harris with 1:47 to play for cut the margin to 40-35. It was 45-40 at halftime.

Jackson opened the second half for Georgia with a 3-pointer to cut the margin to two points, but the Bulldogs could get no closer. South Carolina's lead expanded and contracted until 6-9 sophomore forward Felipe Haase nailed three straight 3s in 95 seconds to make it 69-56 with 9:41 to play, prompting a Georgia timeout.

"Felipe is one player who has not practiced well," said Martin. "I am probably not the right coach for someone who does not practice well. But give him credit. He stayed the course. And he can shoot the ball. I've seen him make four or five in a row a lot of times. It was about time he did it in a game."

Georgia did not rally immediately. The Bulldogs were still down 10 with 4:09 to play, but cut it to five on another acrobatic tip by Harris with 3:07 to go. Gravett, a Georgia native, hit a step-back 3 with 2:41 to play, which proved to be the Gamecocks' last field goal.

Georgia: Tom Crean's first Georgia team continues to struggle to find consistency on offense. While the Bulldogs hit 22 of 25 free throws, they shot just 40 percent from the field and turned the ball over 14 times.

South Carolina: The Gamecocks shot 68.8 percent from beyond the 3-point line, hitting 11 of 16. Haase equaled his career high with his 96-second spurt in the second half.

Nicolas Claxton blocked two shots to give him 59 this year, the eighth best single-season total in Georgia history, one better than his father, Charles Claxton, who blocked 58 in 1994. However, Charles Claxton is comfortably No. 1 on the list, too. He blocked 94 shots in 1995.

Frank Martin's Gamecocks have won four of their last five games in Georgia's Stegeman Coliseum, but he said it is already a difficult place to play. "They are doing something to create an unbelievable fan passion," Martin said. "They sold out earlier this year against a team that I probably could have played for."

Georgia: The Bulldogs will try to gain their first road victory of the conference schedule when they travel to Tuscaloosa next Wednesday to face Alabama.

South Carolina: The Gamecocks face a daunting challenge when they go on the road Tuesday to play at No. 7 Kentucky.