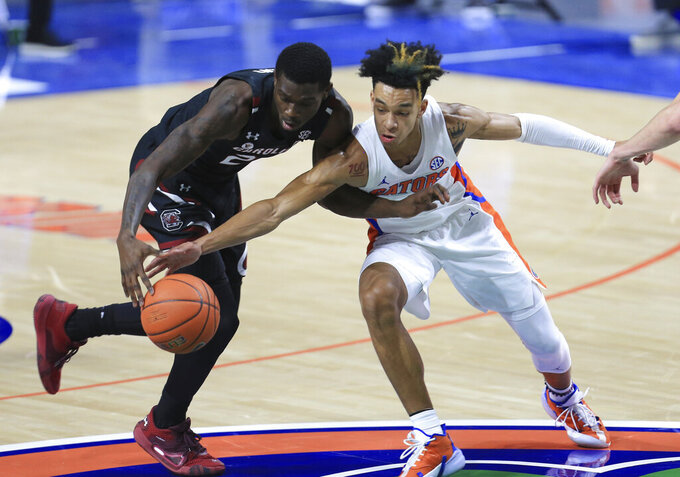 GAINESVILLE, Fla. (AP) — South Carolina coach Frank Martin was beside himself as he counted 10 consecutive first-half possessions in which the ball failed to touch the paint. Turnovers. Offensive fouls. Long-range shots.

Martin made it a point of emphasis at the break, and his players responded better than anyone expected.

AJ Lawson scored 22 points, Seventh Woods added 12 and the Gamecocks beat No. 22 Florida 72-66 on Wednesday night, potentially making the Gators’ return to the rankings a brief one.

Keyshawn Bryant added eight points for the Gamecocks, including six in a decisive 13-1 run over the final 6:37 to close the game. That spurt turned a six-point deficit into an unlikely road victory.

Bryant scored on two dunks and a putback, a microcosm of Florida’s issues all night. South Carolina (5-6, 3-4 Southeastern Conference) dominated the Gators (10-5, 6-4) inside, outscoring them 50-30 in the paint and getting 13 offensive rebounds. Much of that damage came after halftime.

“You’ve got to make some 3s to win, but whoever wins the fight for the paint still wins the game," Martin said. "The 3s are for the fans and the stats and for all the people who sit around and say it’s a pretty game when it’s played that way. I don’t disagree. I wish we would could make 15, 16 3s in a game.

"But at the end of the day, if you want to win, you better get that ball in the paint.”

Florida was playing its first game as a ranked team in more than 14 months. The Gators snuck into the Top 25 after winning four in a row, including victories against No. 6 Tennessee and at No. 11 West Virginia.

But they looked nothing like the same team against Martin’s tough and scrappy bunch that has dealt with COVID-19 issues much of the season.

"Every one hurts. This one hurts more because I feel like we laid down,” said guard Tre Mann, who led Florida with 17 points and eight rebounds. “They came out and punched us in the mouth. We just laid down. So yeah, this one hurt a lot.”

Mann wasn't done ripping his team's effort, which came hours after Florida forward Keyontae Johnson was ruled out for the season nearly two months after he collapsed on the court at Florida State. The Gators revamped their offense without the SEC's preseason player of the year and had finally started to find their footing.

“It’s been tough for us this year. Every time we get a little bit of success, we tend to come out and play bad and lose focus," Mann said. "I feel like that’s what happened again tonight. We just weren’t focused. They came out hungry and they just punked us.”

The Gamecocks pounded the ball in the lane early and often, so many times that Florida ended the game with 12 blocks. But the strategy worked as Lawson made 9 of 16 shots to go along with eight rebounds. Bryant added seven boards.

Noah Locke made three 3-pointers for Florida and finished with 15 points. Colin Castleton chipped in 11 points, seven rebounds and seven blocks, his fourth outing with at least five blocks in the last six games. But Castleton and fellow big man Omar Payne got schooled in and around the rim.

“It just proved we had fight in us,” Lawson said.

South Carolina: The Gamecocks won for the first time in five tries away from home. But they don’t have any gimmes down the stretch with road games remaining against Tennessee, Mississippi State and Georgia. Each of those teams has at least eight wins at home.

Florida: The Gators flushed all the confidence and momentum they built up over the last two weeks. And their schedule gets tough from here, with upcoming road games against LSU, Tennessee and Arkansas.

South Carolina: Hosts Mississippi State on Saturday, the first of three in a row at home.

Florida: Plays at LSU on Saturday, beginning a stretch of three of four on the road.