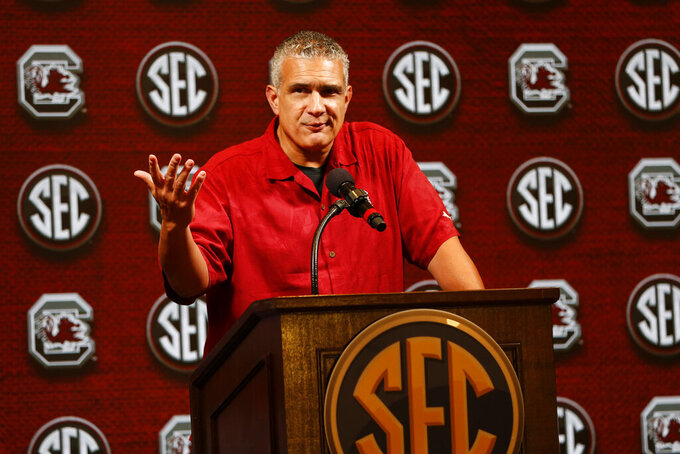 COLUMBIA, S.C. (AP) — South Carolina coach Frank Martin found himself with extra time on his hands this offseason instead of scrambling around searching for players to plug holes in a roster riddled with transfers and departures.

"We've had the first summer where our roster was intact, where I wasn't running around trying to recruit someone for a scholarship," Martin said.

That's certainly been the case most offseasons with Martin, who's got a reputation as a loud, hard-driven leader who can get in players' faces when mistakes are made. That has created a nearly annual shuffling where Martin's had needs to fill before fall camp. Last season, that led to signing Georgetown grad transfer Tre Campbell.

The year before, Martin brought in fifth-year players in guards Frank Booker and Wesley Myers for one season.

Now, Martin is excited he's got plenty of returning players from last season's group that went 16-16 and missed the postseason for a second straight year.

"I saw the possibilities because we had a bunch of these guys in practice even though they didn't play in games last year," said Martin, who's starting his eighth year with the Gamecocks. "I had a feel for what it can be."

That's going to start with dynamic sophomores A.J. Lawson and Keyshawn Bryant , two players who went through some first-year growing pains in the Southeastern Conference but are the team's top returning scorers.

Maik Kotsar, a 6-foot-10 senior who started on South Carolina's Final Four team in 2017, is a third returning starter who'll look to increase his rebounding totals with former SEC defensive player of the year Chris Silva gone. Silva was the team's leading scorer and rebounder his senior year.

Back from injury this winter is sophomore Justin Minaya , perhaps South Carolina's best overall player who missed all but five games last year due to an injury. Minaya, the son of former New York Mets general manager Omar Minaya, said he's had problems in the past setting lofty goals. He's not doing that this season. "I'm just trying to get better day by day," Minaya said. "In the past, I tried to get too far ahead of myself. I'm not doing that."

Some other things to watch for at South Carolina this season:

Chris Silva led South Carolina in rebounds and blocked shots the past two seasons. But Martin has seen several players looking to step into Silva's shot-blocking, rebounding role. Most notably is 6-11 forward Wildens Leveque, a freshman from Brockton, Massachusetts. Leveque has been active around the rim and has gotten a block on just about everyone on the roster at practice.

"Wildens doesn't stand there and watch," Martin said. "He's coming to get the basketball."

A.J. Lawson entered the NBA Draft process last season before returning to the Gamecocks. Lawson is considered a second-round NBA draft pick if he leaves after his sophomore season and can help his status with a strong year at South Carolina.

Maik Kotsar, a 6-10 senior, was a freshman starter on South Carolina's Final Four team. He acknowledged that self-criticism hampered his performance the past two seasons and met with a sports psychologist about not being so hard on himself. Kotsar believes he's entering the season in a better frame of mind and looks to pick up his stats after averaging 6.7 points and 4.7 rebounds last season.

Martin did add one graduate transfer, his fourth in three seasons, in ex-Tennessee Tech forward Macaiah Henry. The 6-9 Henry will fill a need as an experienced tall player in South Carolina's frontcourt. Martin says Henry will need to adjust to the SEC where he'll go against players as tall or taller than him every game, something that wasn't always true at Tennessee Tech.

South Carolina's schedule includes a December run where it faces Houston, a top-25 team last season, before playing rival Clemson and national champion Virginia. Before that, the Gamecocks also could face Martin's friend and mentor, Bob Huggins, and his West Virginia team at the Cancun Challenge during Thanksgiving week. The Gamecocks open against North Alabama on Nov. 6.