South Carolina's Martin: 'I did a poor job' with Gamecocks 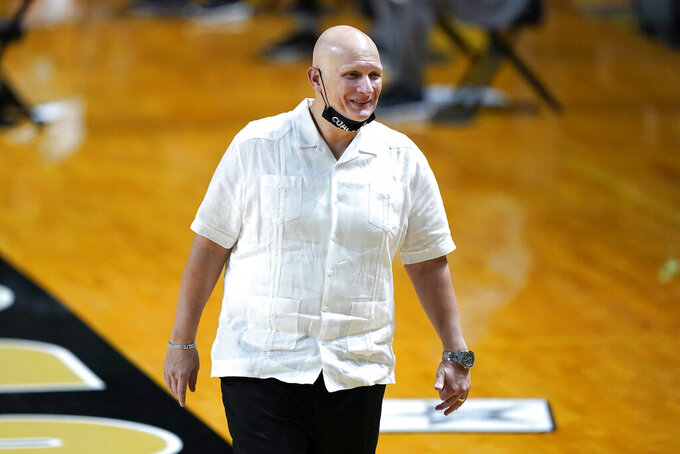 FILE - South Carolina head coach Frank Martin watches the action in the first half of an NCAA college basketball game against Vanderbilt in Nashville, Tenn., in this Saturday, Jan. 30, 2021, file photo. Martin said he did a bad job leading the men's basketball team this past season and believes he can fix the things that went wrong as the Gamecocks finished 6-15. Martin received a two-year contract extension from the school last week that ties him to South Carolina through the 2024-25 season. (AP Photo/Mark Humphrey, File)

South Carolina's Frank Martin admits he did a bad job as men's basketball coach this past season. He also believes his track record shows that he knows how to turn things around.

The Gamecocks finished 6-15, the worst showing in Martin's 14 years of coaching at Kansas State and South Carolina.

The coronavirus pandemic certainly played a role. There were two program shutdowns over a stretch of 41 days in which the Gamecocks played just twice and did not have a complete team to practice because of medical protocols.

Martin himself tested positive for COVID-19 twice since May, the second time a more serious illness during South Carolina's dormant period in January.

Still, Martin took full blame for the awful season: “I did a poor job of leading this year."

Martin remains confident he can steady things going forward. He has done it before, he noted, taking a South Carolina team that was last in the Southeastern Conference the year before his arrival in 2013 to the Final Four in 2017.

At 18-13, the Gamecocks were on the NCAA Tournament bubble in 2020 before the pandemic canceled the event.

This season was a different story, as South Carolina never found its footing and Martin acknowledged he couldn't help his players get in rhythm.

“We've got work to do, man,” he said. "What happened last year was unacceptable. (But) I think I'm going to bet on myself that I'll figure this one out.”

Martin got some breathing room last week to make that happen with a two-year contract extension that ties him to the program through the 2024-25 season. There was no raise. Plus, Martin's buyout of $6.5 million if he were let go right now would be reduced to zero should the school fire him after two more years.

“Is it the contract I wanted? No,” Martin said. “But if they didn’t want me here, they could’ve fired me.”

Martin said he had lengthy, candid conversations with athletic director Ray Tanner reviewing why things went wrong this past season. Tanner was confident Martin had a plan to get things fixed and recommended the extension to school President Bob Caslen.

“This was a decision I think we collectively made, which was the best interest of the university,” Caslen said earlier this week.

Martin will have a different roster to help him try to get back to winning. Five members of this year's team, including fourth-year forward Justin Minaya, have entered the transfer portal.

The Gamecocks have added four transfers, led by 6-foot-3 guard Erik Stevenson, who will join his third Division I school after playing at Wichita State for two seasons and Washington last year.

Two starters and double-digit scorers, forward Keyshawn Johnson and point guard Jermaine Cuisnard, are going through the NBA draft process but have not signed with agents. Martin said both have been at offseason workouts and he expects them to return.

The wait will be longer for the team's top scorer last season, 6-foot-6 A.J. Lawson, to decide his plans for next year. He averaged 16.6 points a game last season.

Because Lawson went through the NBA draft evaluations the last two seasons, Martin said he doesn't have the option to come back this time if he decides to go pro. “He's being careful,” Martin said.

Martin put no stock in speculation he would be fired or that he was scanning the coaching openings for another job. He said he never went looking to leave, instead using the past month to figure out how to fix what went wrong this past year.