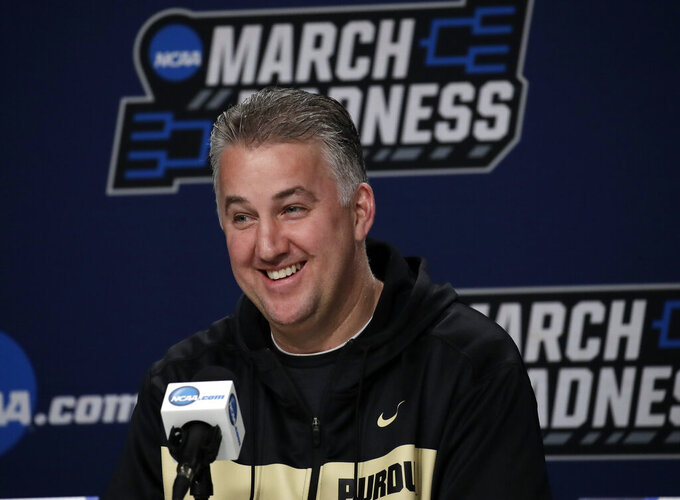 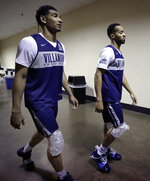 Purdue had to replace four starters off a team that went 30-7 and reached the Sweet 16 last year and still won a share of the Big Ten championship.

Coach Jay Wright's Wildcats (26-9) and Matt Painter's Boilermakers (24-9) have become two of the steadiest and most successful programs in the country, excelling even while rebuilding. On Saturday, they'll meet for first time in the NCAA Tournament, with a trip to the South Regional in Louisville next week on the line.

"It's amazing, it really is," Wright said about Purdue's steadiness under Painter. "I know their program. They rely on guys that understand their system and that have played in their system and are proud of being part of something bigger than themselves. That's what makes them good."

That's also what has made Villanova good — especially this season.

Coming off a second title in three years, the sixth-seeded Wildcats have been far from the juggernaut that marched through March last season. The Wildcats have won four straight, including three in the Big East Tournament last week, but by a total of 21 points. The last three Villanova games have been decided by four points or fewer.

Seniors Eric Paschall and Phil Booth are the Wildcats mainstays. Neither is a future NBA star, but they have been rock-solid leaders while inexperienced players have had ups and downs.

In a four-point victory against Saint Mary's in the first-round, Booth scored 20 points and Paschall had 14 and six rebounds. But it was sophomore Jermaine Samuels who went for 12 and seven and made big baskets down the stretch.

"So their discipline and their toughness and obviously their decision-making and their skill isn't just like a one-year deal and a one-player deal, it's a vision," said Painter, who is in his 14th season at Purdue. "It's a group of guys buying into it and sticking together and playing hard."

Purdue's rebuild has revolved around one star player. Carsen Edwards was the Big Ten's leading scorer. He comes in averaging 23.1 points per game, but it's been an odd season for the junior guard. Edwards is shooting 38 percent from the field, way down from last season. Still, he's a threat to take over a game, similar in style and stature to high-scoring Big East guards Markus Howard of Marquette and Myles Powell of Seton Hall.

"If he comes down in transition and pulls up literally from 30 feet and makes a shot, that can't break you mentally," said Wright, who is in his 18th season at Villanova.

Edwards had 26 points as Purdue beat Old Dominion 61-48 in the first round. The Boilermakers played most of the game without defensive stopper Nojel Eastern, who twisted an ankle before the game. Painter said Friday he expected Eastern to be able to play against Villanova.

Purdue is looking to make its third straight trip to the Sweet 16, which would be a first for the program since 1998-2000. A trip to the Sweet 16 might seem like a come down for Villanova, but for a team that lost to Penn in December and dropped four of five Big East games in February, getting to the second weekend of the NCAA Tournament would be an accomplishment.