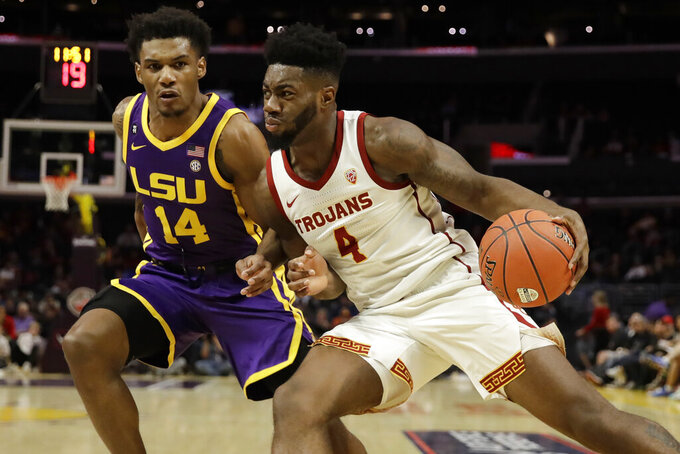 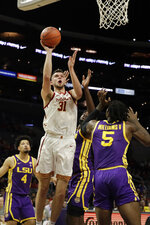 The Trojans trailed by seven midway through the second half against LSU but rallied for a 70-68 victory in the Basketball Hall of Fame Classic at Staples Center.

USC has won four straight and is 10-2 with one game remaining until it begins Pac-12 Conference play. The Trojans were 6-6 at the same point last season.

Two of their last three wins have come against Power Five teams. They won at TCU on Dec. 6 and also have a victory earlier this season at Nevada.

“I feel great. To have the record that we do and playing like we are right now is big," USC coach Andy Enfield said.

Jonah Mathews led USC with 15 points. The senior's 3-pointer with 4:22 remaining put the Trojans ahead for good and was part of a 13-2 run. McKay Anderson hit a pair of 3-pointers, including one with 3:09 remaining to extend USC's advantage to 66-59.

LSU made one final run and got within a basket on a couple occasions. Mathews missed a free throw with 3 seconds remaining but Javonte Smart's jumper was blocked by Onyeka Okongwu at the buzzer.

“We have started to get comfortable playing with each other and are in a nice flow. This is a real big win and gives us confidence," said Nick Rakocevic, who had 14 points and nine rebounds.

Anderson scored 11 points while Daniel Utomi and Okongwu added 10 apiece. The Trojans shot only 41% from the floor, but 11 of their 25 field goals were 3-pointers.

“We made them shoot 31 3's, which was the game plan coming in but Matthews got hot for a little stretch and it was too much for us to overcome,” LSU coach Will Wade said. “They did a good job of adjusting at halftime. We lost Mathews a couple times."

LSU was up 50-43 with 11:20 remaining when the Trojans went on a 7-2 spurt to close within a basket. USC though wasn't able to make key shots and take the lead until 4:51 remaining when Rakocevic made a pair of free throws.

Mays hit a pair of free throws to put LSU back in front before the Trojans went on their big run.

LSU jumped out to an 13-6 lead before Kyle Sturdivant scored eight points during an 18-7 run to put the Trojans up 24-20 with 7:19 remaining. The game was tied at 28 when the Tigers scored the last seven points of the first half.

LSU: The Tigers have dropped two straight and this was their third loss this season by two points.