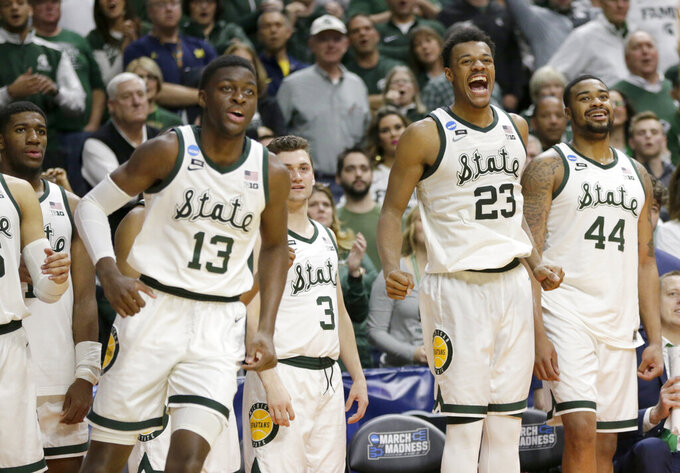 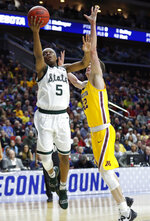 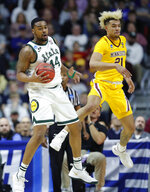 DES MOINES, Iowa (AP) — Michigan State doesn't just hope to get to the Sweet 16 each year. It expects it.

The Spartans played with that attitude, and then some, rolling past Minnesota 70-50 in the second round of the NCAA Tournament on Saturday night to advance to the regional semifinals for the first time since 2015.

"I'm just excited, moreso for our program," said Xavier Tillman, who led Michigan State with 14 points. "Not being able to pass this point for three years, to kind of break the curse for us, it feels pretty good."

The Spartans (30-6) came out swishing shots at a blistering pace and were never seriously threatened, a stark contrast to their nerve-wracking first-round win over Bradley on Thursday.

Winning this all-Big Ten matchup sent the second-seeded Spartans to an East Region semifinal game against LSU in Washington, D.C.

"There's nothing like playing when it stays daylight longer," said MSU coach Tom Izzo, who took his team to the Sweet 16 seven times in eight years before the recent dry spell. "You come out of practice now and the sun's still shining, it's the greatest feeling in the world."

The Spartans made nine of their first 10 shots on their way to building a 20-point lead in the first 14 minutes. Minnesota, playing all but four minutes without star forward Jordan Murphy, managed to cut the lead to single digits briefly in the second half before Big Ten Player of the Year Cassius Winston took over.

Winston had 13 points with nine assists, and the Spartans shot 57.1 percent and held a 45-19 rebounding advantage.

Amir Coffey had 27 points to lead the 10th-seeded Gophers, who shot a season-worst 30.5 percent and made only 2 of 22 shots from 3-point range.

"We felt like we could give it a go with Murph early. When we shot around, he looked good. Then in warmups, it wasn't good at all," Minnesota coach Richard Pitino said. "We talked a lot at halftime about playing a little unconventional. We played four guards, tried to speed things up. We showed heart, cut it to nine, but then Cassius took over and we ran out of gas."

Minnesota (23-14) never found its shooting touch and was hamstrung by Murphy's absence. The Gophers' No. 1 all-time rebounder and No. 2 scorer hurt his back late in the first-round win over Louisville, and he spent most of the game behind the bench stretching.

The game was the first meeting of Big Ten teams in the tournament since 2000 and at the earliest point ever. The Spartans hope this dominating performance lets them move on from the enduring image of Thursday's game: Izzo coming onto the court to berate aron Henry at a timeout and then having players hold him back as he went after the freshman again on the bench.

Izzo should have had no complaints on Saturday. His team beat the Gophers for the second time this season and made it to that second weekend of the tournament for the first time in four years, an eternity by MSU standards.

Minnesota tried to make it interesting, running off eight straight points to pull to 40-31. Then Winston got a rebound and hit a shot from the wing, made a steal and another jumper, and swiped the ball again and buried a 3-pointer to make it 47-31.

"We kind of tried to push the tempo a little bit, get them scrambling," Coffey said. "It was working. We had momentum, the crowd got into it and then Casissus just hit some big shots."

The lead swelled to as much as 22 points from there.

"I told him, 'You've got to take over,'" Izzo said he told Winston during a timeout. "He did, like the All-American that he is. That was about as good a two minutes as you could have."

Minnesota: The Gophers' lack of depth caught up to them. Not only was Murphy out for all but four minutes, they also were without two reserve big men: Matz Stockman for the third game in a row because of a concussion and Eric Curry for the seventh straight game because of a foot injury.

Michigan State: The Spartans have won seven straight games and 12 of 13, and they increased their NCAA Tournament wins total to 67, breaking a tie with Indiana for most in the Big Ten.

Murphy's career came to a tearful end. The senior from San Antonio never missed a game in his career, not even a practice until Friday. He subbed in for 10 seconds in the final two minutes. Gophers fans chanted his name as he came out and went down the bench hugging coaches and teammates with tears in his eyes.