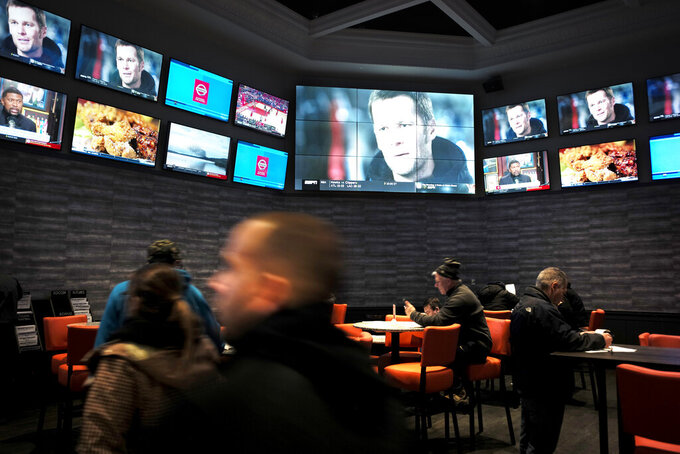 FILE - In this Monday, Jan. 28, 2019 file photo, patrons visit the sports betting area of Twin River Casino in Lincoln, R.I. The state lottery released figures on Friday, March 29, 2019, showing that casinos in Rhode Island lost nearly $900,000 on sports betting in February, after they paid out winning bets for the Super Bowl and other professional sports. ( AP Photo/Steven Senne, File)

PROVIDENCE, R.I. (AP) — Casinos in Rhode Island lost nearly $900,000 on sports betting in February after winning bets for the Super Bowl and other professional sports were paid out, the state lottery said Friday.

Gamblers have placed a total of $53.5 million in wagers since the late November launch of sports betting in the state, with $53.2 million paid on winning bets, according to the lottery's figures for bets placed at Twin River Casino in Lincoln and Tiverton. The state gets 51 percent of sports betting profits, after subtracting expenses.

That leaves Rhode Island with a profit of about $150,000. The state had projected it would get $11.5 million from the new market this fiscal year, which ends June 30.

Many football fans went to the casinos in January and early February to bet on the victorious New England Patriots in the Super Bowl. In February alone, gamblers placed about $20.7 million in wagers and the casinos paid nearly $21.6 million on winning bets, for a $900,000 loss.

Other states with legal sportsbooks that launched in the past year didn't bring in as much in February as they had in preceding months. New Jersey's physical sportsbooks had a tax bill of negative $6,000 for the month, but the online ones brought the state $1.7 million.

Overall, most of the states with newly legal sports betting are on pace to fall short of their revenue projections, but none are lagging as far behind as Rhode Island.

Rhode Island is just 1.3 percent of the way to its $11.5 million goal. Rhode Island Department of Revenue spokesman Paul Grimaldi said Friday that it will obviously be difficult to meet that goal and that the budget will have to be adjusted.

"We'll be better able to project revenue as we get more experience," he said. "I think the people who set their budget gave their best estimates based on the information they had and what the consultants were telling them. In some ways, we're learning a hard lesson."

Revenue for March is looking far better than February's figures due to the NCAA Tournament, Grimaldi said. Gamblers wagered $6.4 million during the first round of the tournament and the state is expecting about $500,000 in revenue from just that round, he added.

Ruggerio said Friday that the numbers will likely improve as the facilities are better prepared to accommodate everyone who wants to wager, with the self-serve kiosks that have been added and the future addition of mobile sports wagering.

"It is doubtful that revenue figures will hold up to estimates, in large part due to a disappointing February, which was not unexpected due to the success of the Patriots," he said in a statement. "With the NCAA basketball tournament in full swing, I anticipate that March numbers will be much better."

Raimondo's proposed budget for the fiscal year beginning July 1 counts on $30 million from sports betting, including $3 million in new revenue from mobile gambling. Grimaldi said he thinks the $30 million estimate will likely be lowered.

Rhode Island legalized and launched sports betting after the U.S. Supreme Court struck down a federal law last year that made most sports gambling illegal.