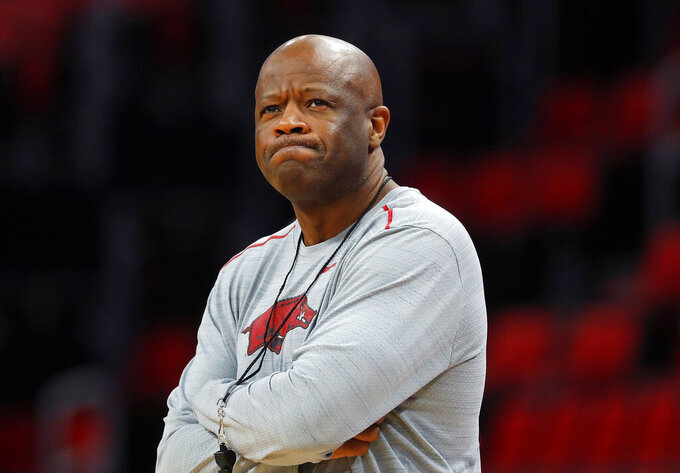 FILE - In this March 15, 2018, file photo, Arkansas head coach Mike Anderson watches practice at the NCAA college basketball tournament in Detroit. Anderson was hired as St. John's coach on Friday, April 19, 2019, after he was fired by Arkansas last month. He also had head coaching stints at Missouri and UAB before leading the Razorbacks to five postseason appearances and a 169-102 record in eight seasons. (AP Photo/Paul Sancya, File)

Anderson was hired Friday by the Red Storm after getting fired at Arkansas last month. He also had head coaching stints with Missouri and UAB before leading the Razorbacks to five postseason appearances and a 169-102 record in eight seasons.

Once he was let go, it didn't take long for Anderson to land another job. Terms of the contract were not disclosed.

"I've been dreaming about this moment for the last nine days," St. John's athletic director Mike Cragg said during a news conference at Madison Square Garden. "And I found the right guy. We are going to win championships."

Anderson said he had not spoken to Mullin about the state of the program, but planned to reach out to him. Mullin guided the Red Storm to the NCAA Tournament this year for the only time in his four seasons at the helm. They were immediately eliminated by Arizona State in a First Four game, and the school doesn't have an NCAA Tournament victory since 2000.

In the wake of Mullin's departure, St. John's drew criticism for being unable to lure initial coaching candidates during a protracted hiring process.

Arizona State's Bobby Hurley and Loyola-Chicago's Porter Moser were targeted before deciding to stay at their schools. Iona coach Tim Cluess said in a statement Thursday he was contacted but was withdrawing his name from consideration. And according to reports, St. John's spoke to Yale coach James Jones and former Georgia Tech and George Mason coach Paul Hewitt about the job as well.

In a radio interview Wednesday on WFAN, wealthy alum Mike Repole was critical of President Conrado "Bobby" Gempesaw, Vice President Joe Oliva, and the school's board of trustees.

Ultimately, the Red Storm decided on Anderson, who is 369-200 in 17 seasons as a Division I head coach. He has never had a losing record.

Neither Oliva nor Cragg would comment specifically on Repole's criticism, but both defended the process the school went through before picking Anderson.

"I would say nine days is a pretty thorough and efficient search," said Cragg, who came to St. John's from Duke last fall.

Anderson, a native of Birmingham, Alabama, spent the first part of his career working for Nolan Richardson. Anderson played for Richardson at Tulsa before becoming an assistant under him with the Golden Hurricane.

When Richardson left for Arkansas, Anderson joined him in Fayetteville. He was an assistant coach at Arkansas for 17 years, helping the Razorbacks win the 1995 national championship.

Known for coaching up-tempo teams that press on defense, Anderson said his goal is to implement an exciting style of basketball that is "really entertaining." He said his teams would be "one of the top assist teams in the country."

"They're going to be one of the top turnover teams in the country. One of the better scoring (and) field goal percentage teams," he added.

The new coach will have plenty of work to do in order to build a quality Big East roster for next season. Junior guards Shamorie Ponds and Justin Simon have declared for the NBA draft, while Figueroa and guard Bryan Trimble Jr. reportedly have placed their names in the transfer portal.

Anderson, who doesn't have previous New York ties, said his plan is to recruit in the area.

Following the news conference, Anderson was scheduled to tour the school's on-campus facilities. He said the previous time he had been inside Carnesecca Arena was 2003 when he was the coach at UAB.

"I remember the last time I played (there), man, it was tight up in there," Anderson said. "I remember it being a really close environment and you put people on top of people, so I'm looking forward to getting over there and (seeing) what (has) been done since those days."