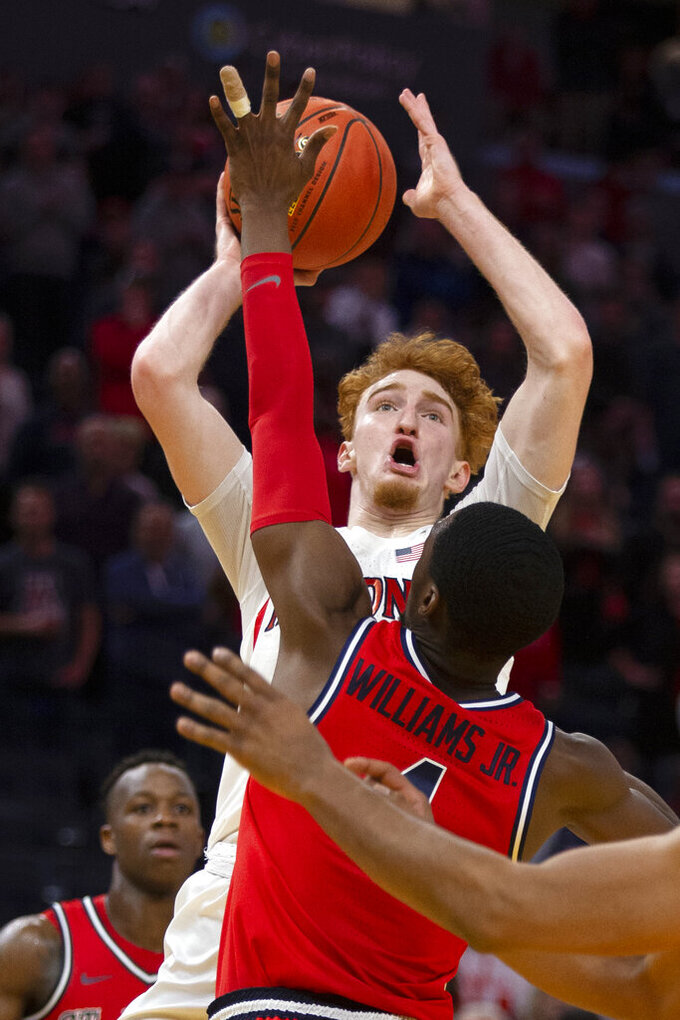 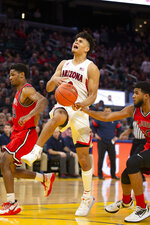 SAN FRANCISCO (AP) — Mike Anderson wanted to seal the signature win he's been looking for in his first season as St. John's coach by having Julian Champagnie intentionally miss a free throw to milk the final 0.2 seconds off the clock.

Champagnie, of course, made the shot by accident — but that didn't stop the Red Storm from extending their winning streak to seven games.

Nick Rutherford scored the go-ahead basket on a driving layup with 1:03 remaining and St. John’s beat No. 16 Arizona 70-67 in the Al Attles Classic on Saturday night despite blowing a 15-point lead in the second half.

"My instruction to Julian on the second free throw was him to miss the free throw. Isn’t it amazing, when you tell him to miss it he makes it?" Anderson said. "But fortunately for us, time ran out for Arizona."

Champagnie's two free throws capped a wild finish to a game that was played almost exclusively at the line late in a foul-filled second half.

St. John’s led comfortably most of the way but had trouble closing out Arizona even though the Wildcats made only two field goals over the final eight minutes. Part of that was because both teams were in the double bonus down the stretch. At one point, Arizona scored 14 consecutive points on free throws.

The Red Storm, on the other hand, sputtered at the line and had missed four of seven free throws before Champagnie's final two went in.

"We’re an attacking team," Anderson said. "We’re not just going to be a jump-shooting team. That’s why I emphasized with our guys, ‘Let’s keep attacking.' They took the game plan and they did a good job."

“I have to credit St. John’s, being able to come out here and do a great job playing without one of their leading scorers on top of that,” Arizona coach Sean Miller said. “They have a style that can really be disconcerting for a team. For a majority of the game we struggled to function.”

The Red Storm never trailed until Max Hazzard made his first shot, a 3-pointer with 1:21 remaining to put the Wildcats ahead 67-66.

After Rutherford scored on a tough drive, Mannion missed a 3-pointer and later came up short on a runner with four seconds left.

St. John’s: The Red Storm were sharp on both ends of the court most of the night and only had trouble late in the second half after getting into foul trouble. The fact that they’ve won twice without Heron has to be encouraging, especially with Big East play beginning next week.

Arizona: The Wildcats fell in a big hole early and ran out of steam after their late rally. The good news was that Arizona repeatedly attacked the basket in the second half and got to the free throw line.

Arizona shot 3 of 16 from 3-point range, with many of the misses coming from well beyond the arc. Miller thought his players were influenced by the NBA 3-point line at Chase Center, the new home of the Golden State Warriors. “With the NBA line being on the court, we might have taken five or six NBA 3s,” Miller said. “That speaks to our lack of poise, our lack of confidence at the beginning of the game.”

Ian Steere scored two points in his St. John’s debut. Steere missed the first 12 games while sitting out a year after transferring from North Carolina State. Steere played one game for the Wolfpack before leaving.

Arizona: Hosts rival Arizona State in the Pac-12 opener for both teams Jan. 4.