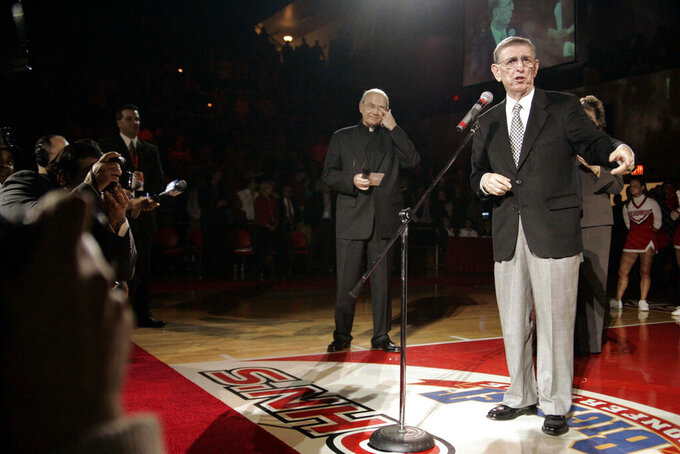 FILE - In this Nov. 23, 2004, file photo, former St. John's basketball coach Lou Carnesecca, right, addresses fans at St John's in New York at a ceremony that was to rename the court for the longtime former coach. Looking on is Donald J Harrington, then-president of the university. St. John's plans to unveil a statue of Hall of Fame coach Carnesecca this fall in the on-campus arena that bears his name. (AP Photo/Ed Betz, File)

NEW YORK (AP) — St. John's plans to unveil a statue of Hall of Fame basketball coach Lou Carnesecca this fall in the on-campus arena that bears his name.

Commissioned by the university, the statue will be placed across from the main entrance of Carnesecca Arena. A public unveiling ceremony is scheduled as the opening event for homecoming weekend on Oct. 22, with a dedication ceremony the following day.

“We’re thrilled to install the statue of Coach Carnesecca in the arena lobby,” athletic director Mike Cragg said in a statement Wednesday. “Coach is the reason that so many of our supporters first fell in love with St. John’s basketball, so it will be fitting that he greets fans as they walk in the door for a game.”

The 96-year-old Carnesecca won 526 games in 24 years as head coach at St. John’s, most in program history. He guided the school to 18 NCAA Tournaments, including a trip to the 1985 Final Four, and its fifth NIT championship in 1989.

He was inducted into the Naismith Memorial Basketball Hall of Fame in 1992.

St. John's also released its nonconference schedule, which includes hosting Kansas on Dec. 3 as part of the Big East-Big 12 Battle in the first basketball game at UBS Arena — the soon-to-be-opened home of the NHL's New York Islanders under construction at Belmont Park.