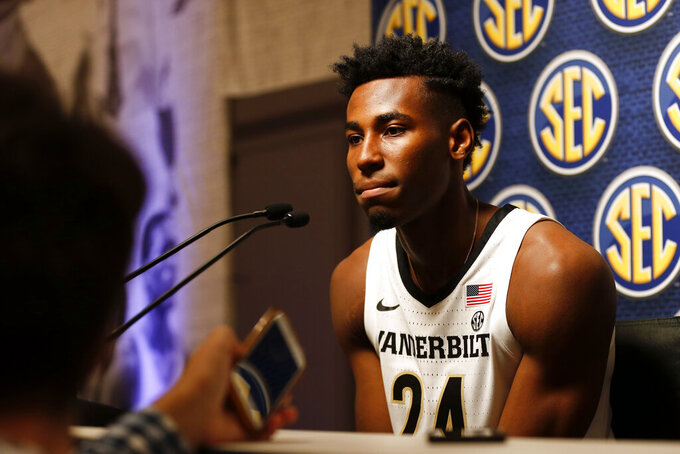 And Stackhouse is ready to put the past, well, in the past.

The 20-game skid to end last season cost Bryce Drew his coaching job after three years on the Commodores' bench, but it's not a topic of conversation. So much turnover has followed the disappointing 9-23 season during which Vanderbilt became the first team in 65 years to go winless in the Southeastern Conference. That record is one reason why the Commodores have been picked to finish last in the SEC this season.

"It's in the rearview mirror," sophomore guard Aaron Nesmith said.

First-year athletic director Malcolm Turner went outside college basketball for his first hire, bringing in Stackhouse who spent last season as an assistant with the NBA's Memphis Grizzlies with a 79-33 record as a G League coach for Toronto. Stackhouse coached that team to the G League Finals twice and won a title. Stackhouse had a couple of NBA interviews lined up and decided to go to college with a six-year deal.

The man who played 18 seasons in the NBA isn't worried about what Vanderbilt has been through before he arrived. He's focused only on the players he has right now and whether they do what he asks of them.

"When they buy into what we're trying to do and able to have some success, I'm pretty sure the followers will come ...," Stackhouse said. "It's great we don't have a lot of expectations from the outside, but we have a lot of expectations for ourselves because of how we work and how we approach things and how we teach, and hopefully the teaching and the learning and the accountability that we put on top of that can bear some good fruit."

Some other thing to look for during the Vanderbilt's 2019-20 season:

Six are back after a painful season led by junior guard Saben Lee and the 6-foot-6 Nesmith who averaged 11 points and 5.5 rebounds as a freshman. Lee took over last season as point guard when Darius Garland, now in the NBA with Cleveland, decided not to return after a knee injury five games into last season. Lee started all 32 games and led the team in scoring with 12.7 points and 3.8 assists a game.

Guard Maxwell Evans and forwards Matthew Moyer and Clevon Brown started a combined 19 games. Brown is the only senior on the roster.

Stackhouse and his coaching staff had to work to replace the six departees. He kept Dylan Disu, a 6-9 four-star recruit, and guard Scotty Pippen Jr., yes the son of former NBA star Scottie Pippen, who had verbally committed to Drew. Stackhouse also landed Notre Dame transfer DJ Harvey. Stackhouse also added some size in a pair of 6-10 players in Quentin Millora-Brown, who transferred from Rice, and Oton Jankovic from Croatia.

The newcomers will get a chance to play early.

"In our case, some of our best players on the floor are going to be some of our younger guys," Stackhouse said.

Nesmith plays the same position Stackhouse did in the NBA is the same size as his new coach. For a guard who came in as a top recruit a year ago with NBA aspirations, Nesmith sees his new coach as someone he can learn a lot from.

"He's been where I want to be," Nesmith said. "He's been in the league for 18 years, and he's done it at a high, competitive level so everything he says I listen to. I watch him. I listen to him. I just try to (do) as much as he tells me to do."

Lee is the easy pick to play point guard again. Stackhouse says he can see both Lee and Pippen, currently backing up Lee, being on the court together to help Vandy close out a game.

Stackhouse has put together a schedule giving him time starting with the opener Nov. 6 against Southeast Missouri State to grow into the fast-paced way he wants the Commodores to play. They visit Richmond on Nov. 14, host Buffalo on Dec. 3 and play Loyola-Chicago in a Basketball Hall of Fame Showcase before wrapping up the nonconference slate Jan. 4 against SMU. Then SEC play begins Jan. 8 at Auburn with the Commodores trying to end a 19-game skid in conference play.