Stanford coach Haase building a culture for his team 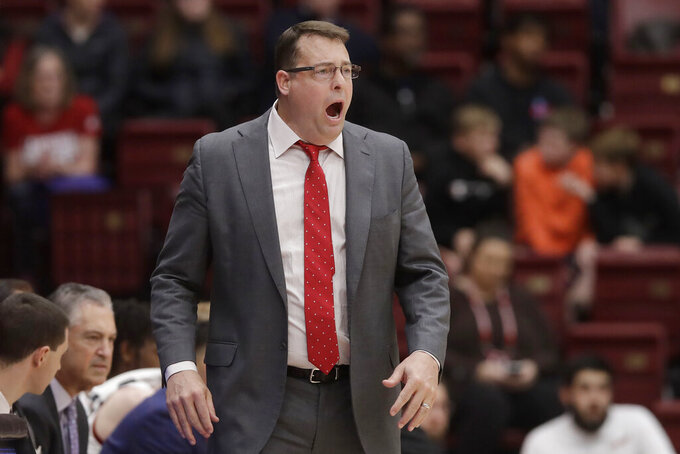 FILE - Stanford head coach Jerod Haase yells during the first half of the team's NCAA college basketball game against Arizona State in Stanford, Calif., Feb. 13, 2020. As Haase begins his sixth season coaching the Cardinal, he remains grateful every day to get to work at a place like Stanford. (AP Photo/Jeff Chiu, File)

STANFORD, Calif. (AP) — With puppy Kaci on the leash eagerly pulling him along, Stanford men's basketball coach Jerod Haase begins one of his regular cross-campus power walks that take slightly different routes depending on the day and how much time he can carve out of his busy schedule.

The playful pooch, who turned 1 in September, tends to stop people and other dogs, or fountain hop to cool off and slow down the entire exercise mission -- so she might not be allowed to go along if there’s a recruit to host later or a prospect to scout somewhere in a nearby gym.

“She’s more part-human than dog, and we treat her that way,” Haase says as he ventures out on what will be a two-mile excursion through the sky-high trees and spectacular buildings that make Stanford an architectural treasure.

Haase points to spots where he has made valuable connections with professors or other Stanford standouts, amazed at how VIPs seem to be at every turn at an institution like this. One friendship he has formed is with Dr. Michael Longaker, a professor in the School of Medicine and the co-director of the Institute for Stem Cell Biology and Regenerative Medicine.

None of this is by accident. Haase arrived at Stanford from the University of Alabama-Birmingham in 2016 determined to build a lasting culture, a process that didn't come as quickly given numerous injuries and players who stayed only one season before making the NBA leap.

These days, many of Haase’s players have spent some time with Longaker.

“He asks me to meet with recruits when they come on campus,” Longaker said. “I’ve enjoyed that. He’s allowed me to do that. He’s exactly as advertised. He wants to win and he wants to win at Stanford. I am very grateful for the opportunity. I’ve met some incredible young men and women at Stanford. Hopefully, it’s made a difference on some of them.”

When former Stanford star Oscar da Silva visited campus from Germany with his mother, he asked if he could major in chemical and systems biology — so Longaker provided guidance.

Most of the athletes are left inspired by the knowledge and experience in the room.

“It was really cool, we had interesting conversations about what I can do at Stanford outside of basketball, not only in his field but some of the other stuff,” recalled senior forward Jaiden Delaire. “He gave me some really good advice on how I should manage my time and who I should talk to.”

“You’re walking by seeing all the students in their little lab coats working on stuff, really making something of their opportunities and they really could change the world,” Jones said.

As Haase begins his sixth season, he remains grateful every day he works at a place like Stanford, where he has the support of an entire university. He believes sustained basketball success is coming.

“In some ways it feels like I’ve been here a long time, in some ways I feel like I’m kind of starting from the beginning still,” Haase said. “At Stanford, you usually don’t have moving parts, but we’ve had a lot of moving parts. What I tell, whether it’s my staff, donors or anybody that’s interested, if we can crack the code of getting old, we’ll be really good. And I think we could be sustained good.”

Last season, Stanford was on that path before the pandemic made for “a unique and different year.”

That included losing forward Ziaire Williams to the NBA after his freshman season. The 6-foot-8 Williams was the program’s highest-ranked recruit ever and is now with the Memphis Grizzlies.

Recently, two players graduated in three years, while Haase also lost two players to medical hardships that prematurely ended their playing careers. Two others like Williams left early for the NBA over the past three seasons — two of whom Haase never would have envisioned doing so during the recruiting process.

“Stanford is such a unique place that you can’t really explain to anybody until they’re really here,” Hall of Fame women’s basketball coach Tara VanDerveer said. “He understands Stanford. In the beginning, I think it was so different.”

For now, Haase is comfortable in his surroundings and committed to exposing his players and three children to all the great opportunities along every path and at every corner on The Farm.

With Kaci the Cavachon in tow, of course.

“Wherever we go she tends to be happy," he said, "as long as she can smell and enjoy the day she seems to be happy, and meet people so they can rub her belly.”