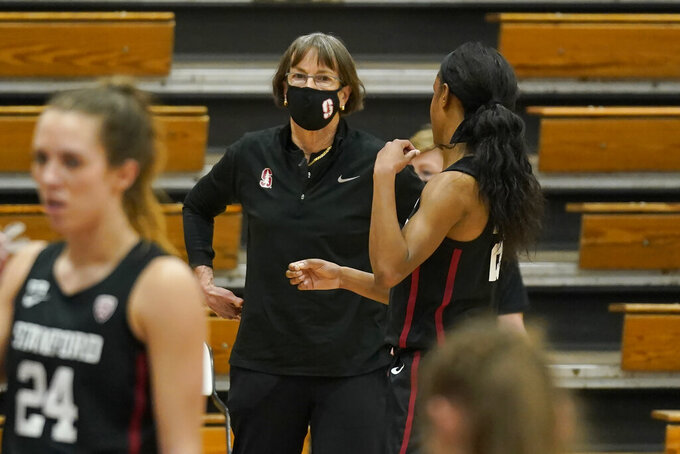 Stanford head coach Tara VanDerveer talks with Stanford guard Kiana Williams during a break in the action against Pacific in the first half of an NCAA college basketball game in Stockton, Calif., Tuesday, Dec. 15, 2020. With a win over Pacific, VanDerveer will become the winningest women's coach in history breaking Pat Summitt's record of 1,098. (AP Photo/Rich Pedroncelli)

GAME OF THE WEEK: Arizona vs. Stanford, Saturday in Santa Cruz, California. The Cardinal (2-2) have yet to play at home and have relocated to Santa Cruz due to coronavirus restrictions in their home county. Stanford opened the season with four games in North Carolina and set up shop down the coast when it got back. Arizona (5-0) is one of two undefeated Pac-12 teams with Washington State (5-0). The Wildcats beat UTEP 69-61 on Saturday despite not making a 3-pointer for the first time in 411 games.

LOOKING AHEAD: Two blueblood programs will meet on Saturday, when UCLA faces Kentucky in Cleveland. The Bruins have the most national titles in NCAA history with 11 and the Wildcats are second with eight. Both teams were ranked in the AP preseason poll, but have since dropped out. ... Colorado will face Washington in Las Vegas on Sunday, but it won't be a conference game. ... Oregon puts the nation's fifth-longest home winning streak (24 games) on the line against San Francisco on Thursday. The Dons already have wins over then-No. 4 Virginia and Nevada on their resume.

INSIDE THE NUMBERS: Washington State is off to its best start since opening the 2017 season 6-0. With wins against Montana State and Prairie View A&M, the Cougars would be off to their best start since opening 14-0 in 2007-08. ... The Pac-12 had two players hit late game-winning 3-pointers last week. California's Makale Foreman did it at the buzzer to beat San Francisco 72-70 and Arizona State's Remy Martin knocked his down with 9 seconds left in a 71-70 win over Grand Canyon.

PLAYER TO WATCH: Jemarl Baker, Arizona. The junior guard had a superb game against Northern Arizona last week, scoring 33 points while going 7 of 9 from 3-point range. He was named the Pac-12 player of the week after averaging 19.7 points on 65% shooting.

ON THE WOMEN’S SIDE: Stanford coach Tara VanDerveer won her 1,099th career game when the top-ranked Cardinal beat Pacific 104-61 Tuesday night, passing Pat Summitt on the women's college basketball all-time wins list. Stanford faces Southern California on Saturday and No. 11 UCLA Monday. ... The Oregon schools face the Washington schools and the Arizona schools head to the mountains to face Utah and Colorado.