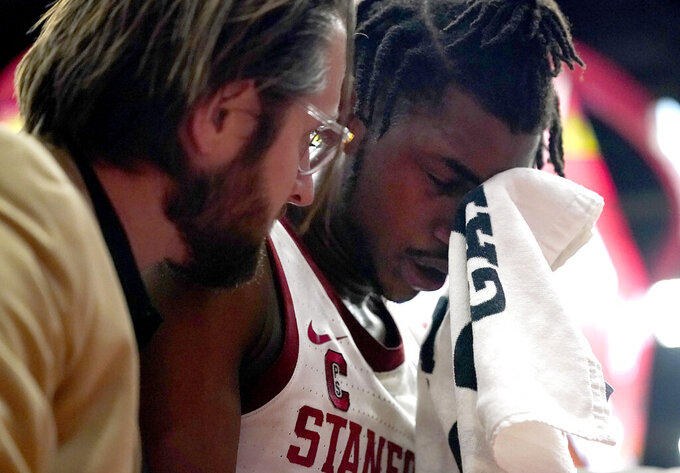 Stanford guard Daejon Davis, right, is taken off the court by a trainer after a collision against Washington during the first half of an NCAA college basketball game Thursday, Jan. 9, 2020, in Stanford, Calif. (AP Photo/Tony Avelar) 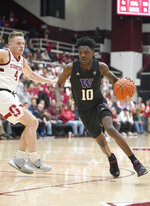 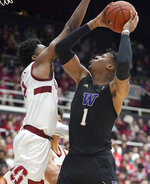 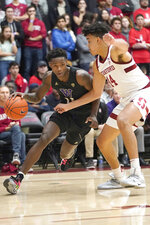 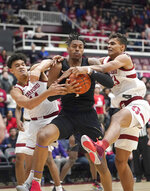 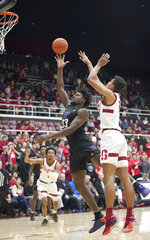 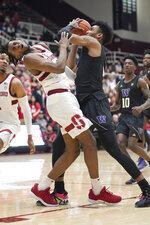 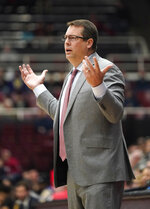 STANFORD, Calif. (AP) — The halftime speech was reiterating the game plan. That seemed to jolt a second-half renaissance.

Tyrell Terry hit a go-ahead 3-pointer with under two minutes to play and Stanford overcame a 12-point deficit to stun Washington 61-55 on Thursday night.

“You have to have confidence to keep shooting,” said Terry, who finished with 11 points. “We can’t let missed shots discourage us.”

“We literally weren’t hitting shots,” Davis said. “The coaches talked about the game plan at halftime and just sticking with it.”

Spencer Jones scored eight of his 14 points in the first half and James Keefe had seven at halftime to keep the Cardinal in it. Oscar da Silva scored all 11 of his points in the second half.

“Our defensive performance was really good,” Stanford coach Jerod Haase said. “We were getting multiple stops in a row.”

Jaden McDaniels produced his first career double-double with 18 points and a season-high 15 rebounds for the Huskies (11-5, 1-2), who were held scoreless over the final 3:12.

Nahziah Carter added 16 points and Isaiah Stewart was held to a season-low four points, his first game under 12 points.

“We did a good job finding the shooters in the first half; we made it very difficult for them,” Huskies coach Mike Hopkins said. “In the second half, we had a couple breakdowns and they made a couple of end-of-clock shots. Then we missed some free throws down the stretch. When you're on the road, you've just got to keep scoring.”

Elijah Hardy made his first career start in place of Quade Green, who was declared academically ineligible earlier Thursday. The Oakland native was part of a rotation at the point that also included McDaniels and Hamier Wright, among others.

“We had so many different lineups in there that it looked like scrambled eggs at times,” Hopkins said. That's what happens when you lose a guy like Quade. Elijah did a good job, on defense especially, but he had a couple breakdowns. It's a tough situation to be in. It's hard to lose your starter.”

Stanford needed its own rotation in the post in an effort to combat Washington’s superior size advantage on both ends of the court. da Silva, Lukas Kisunas, Jaiden Delaire, Jones and Terry were each called for two fouls in the first half.

Isaac White and Keefe were also utilized inside as the Cardinal fumbled around looking for ways to score. They shot 27.6% from the field and were 3-of-14 from long range in the first half.

The Huskies led by as many as 12 before White hit an off-balance 3-pointer from the corner to bring Stanford within 28-20 at the half.

Washington: The Huskies will be learning to play without Green. He recorded his eighth consecutive double-figure scoring game against USC on Sunday and has a turnover-to-assist ratio of 2.3 to 1. Green, who can still practice with the team, could potentially return in late March depending on whether Washington plays in a postseason tournament and how far it advances. Winter quarter at the school is scheduled to end on March 20, the week the NCAA Tournament begins.

Stanford: Junior guard Daejon Davis was hit in the eye about seven minutes into the game. He was led straight to the locker room and underwent the concussion protocol before returning to the game just before halftime. “I willed myself to come back and do anything to help the team,” he said.

Washington: Plays at California on Saturday.