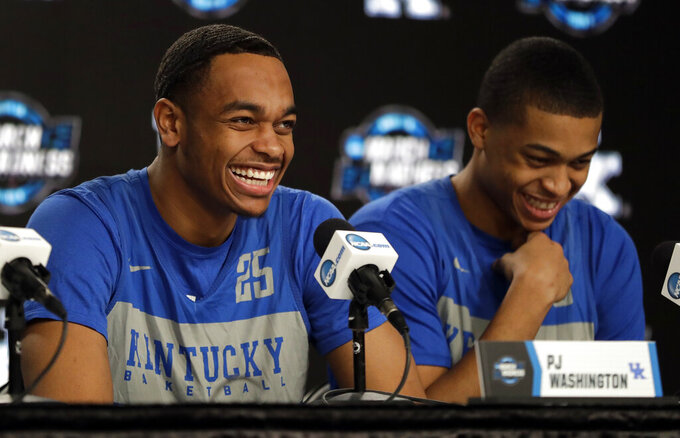 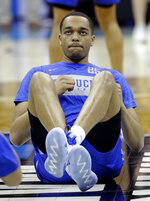 KANSAS CITY, Mo. (AP) — PJ Washington wasn't wearing a cast on his left foot when he arrived at the Sprint Center on Thursday, and during the practice period open to the media he jogged, did some lateral shuffle drills and shot free throws.

Those were encouraging signs for Kentucky, but coach John Calipari still couldn't say whether his star forward would play in the NCAA Midwest semifinal against Houston (33-3) on Friday night.

The second-seeded Wildcats (29-6) beat Abilene Christian and Wofford in the first two rounds of the NCAA Tournament without Washington. The 6-foot-8 sophomore has been out since he sprained his foot against Tennessee in the Southeastern Conference Tournament semifinals March 16.

Washington was in a cast until Tuesday and posted on social media a video of himself walking in basketball shoes Wednesday.

"I feel good," he said. "It's just about going out there and seeing if I can do stuff on the court. I haven't put any pressure on it yet."

Washington averages 14.8 points and 7.5 rebounds to lead the Wildcats, and his availability is crucial for a team looking to reach the Elite Eight for the seventh time in 10 years. NBA draft analysts rate him among the top power forwards available this year and a probable first-round pick.

"Yeah, we're a very different team without him in the lineup," graduate transfer forward Reid Travis said. "Obviously just look at his production, his leadership, the things that he does on the court for us, the way he can pass. He makes a lot of us a lot better. We get him back, I feel like we'll be a lot stronger team."

"If anybody in this tournament right now takes their best player off the court, they're not going to be as good," Calipari said. "We're not as good without him. There's no question."

The Wildcats have been short-handed in the front court for all but one game the last five weeks. Travis, averaging 11.5 points and 7.1 rebounds, missed five games with a knee injury. The only full game Kentucky has had both players healthy since Feb. 19 was a 73-55 win over Alabama in the first round of the SEC Tournament on March 15.

"Because he hadn't played for a couple weeks, people may forget how good he is," Calipari said of Washington. "He's an All-American. But in the interim Reid has done well. Now Reid has stepped up his game (with) the physicalness that he plays with. And EJ had 11 rebounds one game, and Nick is blocking shots. Jemarl Baker comes in and plays his butt off. All of a sudden, we become a little different."

"We've never seen him play except on film. So, all the film we're watching is with him," he said. "I haven't watched them without him."

Calipari said he could envision Washington doing anything from not playing at all to logging 15-18 minutes.

"If PJ plays more than that," he said, "I would be stunned, surprised."