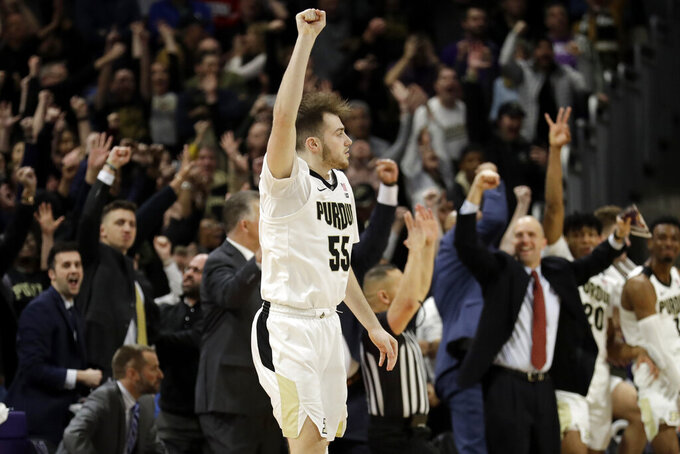 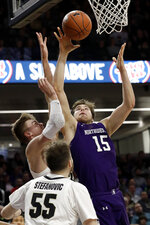 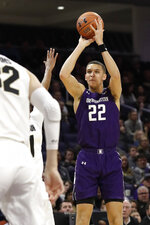 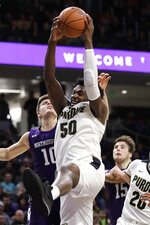 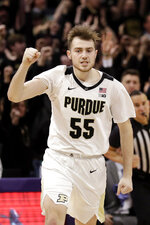 EVANSTON, Ill. (AP) — Sasha Stefanovic brought a sense of relief to his coach Matt Painter and his Purdue teammates in a game they desperately needed to win.

Stefanovic made a 3-pointer with 3.1 seconds left and Trevion Williams scored 13 points as the Boilermakers rallied to beat Northwestern 61-58 on Saturday night.

After a replay overturned a Northwestern possession, the Boilermakers went down the floor and set up a long 3 for Stefanovic.

A loss to last-place Northwestern would have been devastating for Purdue and their chances for the NCAA Tournament.

“I think this is one that we kind of needed to have. After the game we kind of could breathe a little bit. I think a lot us were wound up a little bit," said Stefanovic.

After the game, Painter couldn't remember the last time they had a review go in their favor.

“The monitor thing, it could go either way and we never get monitor calls. Any time they go to the monitor it seems like we’re 0 for 20 on monitor calls. I hate that damned monitor. But today we got lucky," said Painter. “That was luck for us. One more possession ends up being the game. Obviously we were very fortunate to have a call go our way.”

Northwestern has lost four times this season after leading by five or more with 5 minutes to play.

“It’s tough. As a staff, we have to keep putting our guys in those situations in practice. But practice can’t replicate that. The only way you can learn is by being in it," Northwestern coach Chris Collins said. “The reality is we haven’t closed the deal in those games.”

Northwestern has not defeated Purdue since March 9, 2014. It was their eighth straight loss to the Boilermakers

Hunter added 13 for Purdue and Stefanovic finished with six points.

After a three-point play by Proctor gave Purdue a 35-33 lead early in the second half, Buie went on his own 9-0 run, hitting three consecutive 3-pointers. Buie's 3 in transition gave the Wildcats a 42-35 lead with 15:01 left.

Northwestern led 29-25 at the half. Kopp was 3 of 4 from 3-point range for nine points and Pat Spencer added six.

Northwestern: The inexperience of the Wildcats factored into being held scoreless in the final 4:34. “I really feel for our guys, but these are the moments that test your mettle. The only way you figure it out is by being in these battles," said Collins.

Northwestern: at Rutgers on Feb. 9.