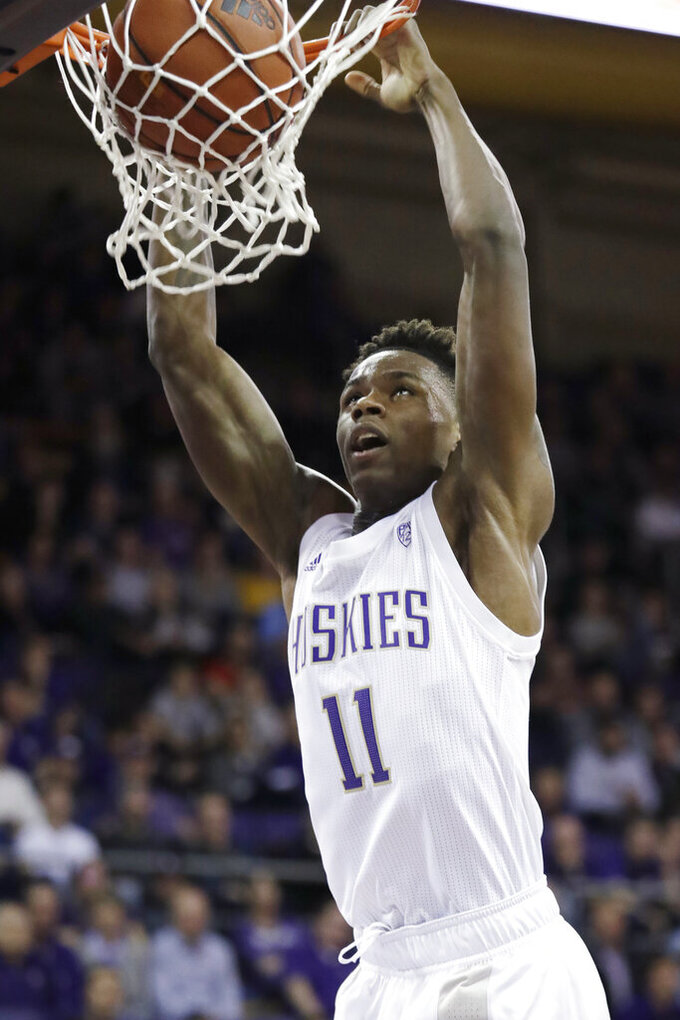 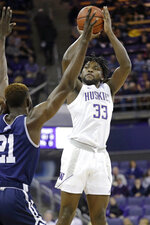 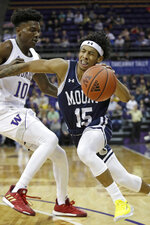 SEATTLE (AP) — Coming off a marquee win to open the season, Washington spent the first 20 minutes looking unenthusiastic and sluggish.

What was expected to be an easy home opener before another big weekend showdown turned into a bigger fight than the Huskies expected.

Isaiah Stewart scored 16 points and blocked five shots, Nahziah Carter scored 12 of his 14 points in the second half, and No. 20 Washington overcame an awful first half offensively to pull away for a 56-46 win over Mount St. Mary's on Tuesday night.

"We have to have that same sense of urgency right from the get-go," Washington coach Mike Hopkins said. "We're going to have a lot of ups and downs with this team, a lot of learning experiences. We're lucky today we are able to win and learn, rather than lose and learn."

Days after opening the season with an upset of then-No. 16 Baylor, the Huskies (2-0) lacked energy early on and at times lost at the offensive end of the floor. But they found enough scoring in the second half to shake the pesky Mountaineers.

"We came out stagnant, slow, wasn't really cheering on our teammates, getting fired up, getting the crowd into the game," Carter said. "That's a lot on us being the vets on team and we have to understand that and tell our young guys."

Stewart was again a force on the interior as the freshman made 7 of 10 shots, mostly from close range, and was imposing defensively. Carter ignited a sleepy arena with a fast-break dunk midway through the second half and followed with a 3-pointer from the wing to give Washington a 43-36 lead.

The Mountaineers (1-2) wouldn't go away, hitting five 3-pointers in the second half as they found gaps in Washington's zone defense. Vado Morse finished with 10 points. Naim Miller and Damian Chong Qui both added nine points.

Washington had lengthy scoring droughts and struggled to run its offense without Stewart in the post. The offensive woes were an amplified version of what Washington experienced in the opener against Baylor. It took a late 21-5 run by Washington to pull off the upset, which at least for one game hid the question of how the Huskies will go about replacing 80% of its scoring from last season.

Defense won't be the issue with Washington. It will be finding the right scoring options.

For this night, it was Stewart and Carter providing enough punch. Hameir Wright added nine points and seven rebounds.

"I think he's the key to this team," Hopkins said of Wright. "He's the glue keeping these guys together. He's got the experience and I think he's really improved in that area."

Tied at 21-all at halftime, Washington jumped to a seven-point lead in the opening moments of the second half, but it was gone in a matter of minutes. Nana Opoku's rebound and basket caped an eight-point run and gave Mount St. Mary's a 34-33 lead with less than 12 minutes remaining.

It was the last lead for the Mountaineers, who were outscored 23-12 the rest of the way.

Washington: The Huskies will need to get more out of Jaden McDaniels. The prized freshman was 2 of 9 shooting. He did have nine rebounds and four assists, but also committed five turnovers. ... Washington was 7 of 14 at the free-throw line and 5 of 18 on 3-pointers.

Hopkins became the second-fastest coach in Washington history to reach 50 wins. Hopkins is 50-22 at Washington. Tippy Dye reached 50 wins in his first 62 games at the school between 1951-53.

Mount St. Mary's: The Mountaineers continue their early-season trip at Lamar on Friday.

Washington: The Huskies will face Tennessee in Toronto on Saturday.