Stewart leads No. 25 Washington to 73-56 win over Montana 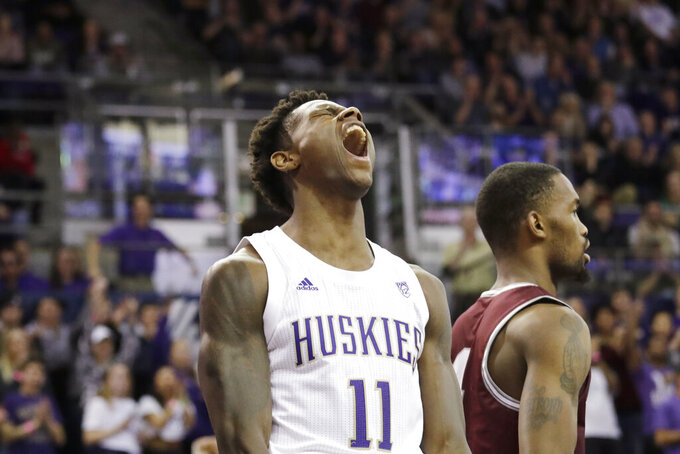 Washington's Nahziah Carter tips back his head and lets out a yell after being fouled while making a shot against Montana during the second half of an NCAA college basketball game Friday, Nov. 22, 2019, in Seattle. (AP Photo/Elaine Thompson)

SEATTLE (AP) — Young players have a long list of things to learn early in the season. Washington coach Mike Hopkins checked off a few items — and probably added some — after his team’s latest win.

“It’s like anything, sometimes you take a step forward and two steps back,” Hopkins said. “But you always see good things. I think as a coach, just how I’m built, it’s never going to be OK until it’s OK. You’re constantly challenging, raising the standard, getting frustrated. These guys, they’re good kids, they’re good learners, we know they want to win. It’s just selling it every day.”

Washington (4-1) relentlessly went to the paint — whether its center was on the floor or not — and used its size to stymie the Grizzlies and force 20 turnovers. The Huskies outscored Montana 38-10 under the basket and drew 34 fouls, hitting 22 of 28 free throws to power to their second straight win.

However, the young Huskies committed 21 turnovers, missed all 11 3-pointers and let a pesky Grizzlies squad stick around until late in the second half as Stewart sat on the bench with foul trouble.

Kendall Manuel scored 15 points and Sayeed Pridgett had 13 for Montana (1-4), which has lost three straight.

Stewart played just 4:41 in the first half after picking up three quick fouls against the smaller Grizzlies. He got his fourth foul just 1:15 into the second half and Montana took its first lead of the game when Pridgett hit a 3-pointer to make it 32-31 with 17:58 to go.

The Huskies held it together while Stewart sat on the bench, though, and he returned with 8:46 to go. He was a foul magnet in the paint, drawing two free throws 25 seconds after he re-entered. He also had a block less than a minute after hitting the floor. He scored 13 the rest of the way and helped the Huskies finally shed the Grizzlies in a chippy game that included 51 fouls.

He hit 5 of 6 free throws over the final stretch while his teammates slowly pulled away by holding Montana scoreless for 3:43.

“The earlier that you can go through that as a team and learn how to get through it, (the better),” said backup center Sam Timmins, who played 19 minutes with Stewart on the bench. “And if we have to use different lineups like we did tonight, it’s all a learning experience.”

Washington outscored Montana 38-10 under the basket and drew 34 fouls, hitting 35 of 46 free throws to power to the win.

The Huskies started the game on a 9-0 run and had an 11-point lead with 6:55 to go in the first half. But Montana used a 14-3 spurt fueled by a stretch of 5-for-5 shooting stretch to tie the score at 29 on Pridgett’s 10-foot jumper. The Huskies shot 1 for 10 to finish the half before Jamal Bey’s driving layup at the buzzer gave Washington a 31-29 lead at the half.

Montana vs. Washington is always a bare-knuckle game involving regional rivals, and this was no exception. There were several tension-filled moments during such a physical game. McDaniels and Pridgett went after each other at one point with the high-scoring freshmen drawing a double technical. Montana coach Travis DeCuire, a native of nearby Mercer Island, drew a technical for arguing a call.

And Hopkins almost came out of his shirt when officials called Carter for a foul as he skyed to grab a contested loose ball.

“What are you talking about?” Hopkins joked when asked about his reaction before adding, “In a game where you’re competing, you’re in there competing. Every play matters and those type of plays can be game-changers either way.”

Montana: The Grizzlies showed some pluck after losing at home Monday to NAIA opponent Montana Tech. Overmatched in size and depth, no one expected them to beat Washington. However, they were in it longer than predicted and now have a little momentum going into more size-appropriate competition.

Washington: The win didn’t come easy — again — for the Huskies, but every minute on the court counts for Washington’s inexperienced freshman as they prepare for a Dec. 8 showdown with Gonzaga.

Montana: The Grizzlies will return home to play Texas Southern on Monday.