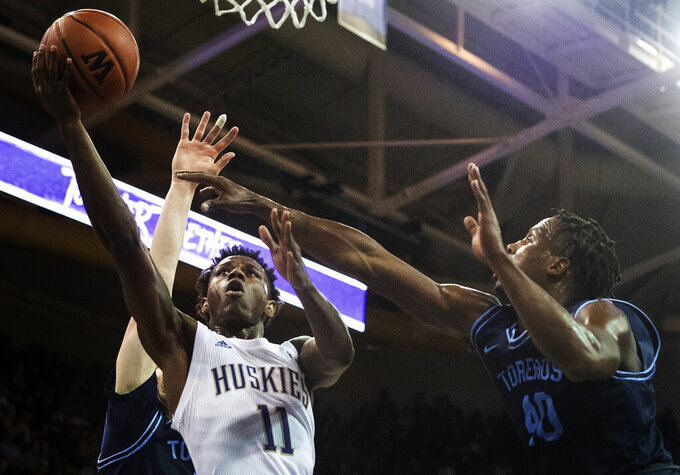 SEATTLE (AP) — Isaiah Stewart and Jaden McDaniels are learning the value of patience.

The big names in No. 25 Washington’s eye-catching recruiting class finally put it together for most of a game Sunday night, both scoring career highs during the Huskies’ 88-69 win over San Diego.

Slowly but surely, they’re catching on.

“We talk about baby steps,” Washington coach Mike Hopkins said. “We took one tonight. But we’ve still got a long ways to go.”

The imposing Stewart had 25 points and seven rebounds, the silky smooth McDaniels scored 20 and each took over the game at points to help the Huskies (4-1) win their third straight. The freshmen then teamed up to score the first 10 points of a game-clinching run early in the second half.

Many of their points came in transition with the players sometimes starting and ending the fastbreak.

“I feel like we do have to be patient because it’s not the same as high school,” McDaniels said. “We’re not just like the only people on our team. We have to find ways to create for each other and for our other teammates.”

Marion Humphrey scored 13 and Jared Rodriguez added 12 for the Toreros (2-5), who have lost three straight games including two to Pac-12 opponents.

Stewart and McDaniels started to exert pressure on the much smaller Toreros late in the first half when the Huskies put together a 12-2 run to take a 41-30 halftime lead. After San Diego cut it to 29-28 on Finn Sullivan’s 3-pointer, Stewart scored five straight points to start the run.

The 6-foot-9 center hit two free throws, then finished a fastbreak with a putback off his own missed dunk, drawing a foul. The three-point play made it 34-28, and he finished off the run with a tip in of a miss by Quade Green.

Stewart had 14 points and seven rebounds at the half with McDaniels adding 10 as he drove the lane with speed and power.

They continued to spur the Huskies in the second half, combining to start an 18-3 run with 10 straight points. Stewart started it with a three-point play off a lob pass and McDaniels added a driving finger-roll and a short jumper after getting the ball back from a teammate following his own missed dunk. He then hit a 3-pointer to make it 53-47 with 15:23 left.

Hameir Wright hit a 3 and Nahziah Carter finished the run with a 3 and a driving layup to make it 61-40 with 13:22 left. Wright finished with 16 points and Green had 10 assists.

The Huskies overpowered the Toreros in the paint, outscoring them 46-28 down low and outrebounding them 33-27.

All those paint points led to a 57 percent shooting percentage (32 of 56) for the Huskies. McDaniels was especially efficient, hitting 7 of 10 shots and 4 of 5 free throws.

“He was spectacular,” Hopkins said. “The thing about it was he was really, really efficient today. He scored some points in few shots. I felt like we got him the ball in some better areas. He got a couple of wide open 3s. That’s always nice. He’s such a good defensive player, he’s just scratching the surface. It’s going to be fun working with these guys.”

No surprise, young Washington has been a bit of a turnover machine. The Huskies rebounded from a 23-turnover effort against Montana on Friday with a season-low 10 against San Diego on Sunday.

Hopkins has put an emphasis on valuing the ball in practice and the message appears to be getting through.

San Diego: It’s that time of year when mid-major teams take their lumps and the Toreros are earning their frequent flyer miles after playing at then-No. 25 Colorado and the now-No. 25 Huskies during an eight-day span. They now return to a more appropriate level of competition.

Washington: The Huskies again struggled with a less-talented team early, but showed some of their promise as they fatten up on nonconference opponents before a Dec. 8 showdown with No. 8 Gonzaga. Stewart and McDaniels looked less like freshman than they have this year.

San Diego: The Toreros return home Wednesday to host Hofstra in what will be the first game of the Boca Raton Beach Classic (early rounds played offsite).

Washington: The Huskies will take the holiday off before continuing their seven-game nonconference homestand against South Dakota on Dec. 2.