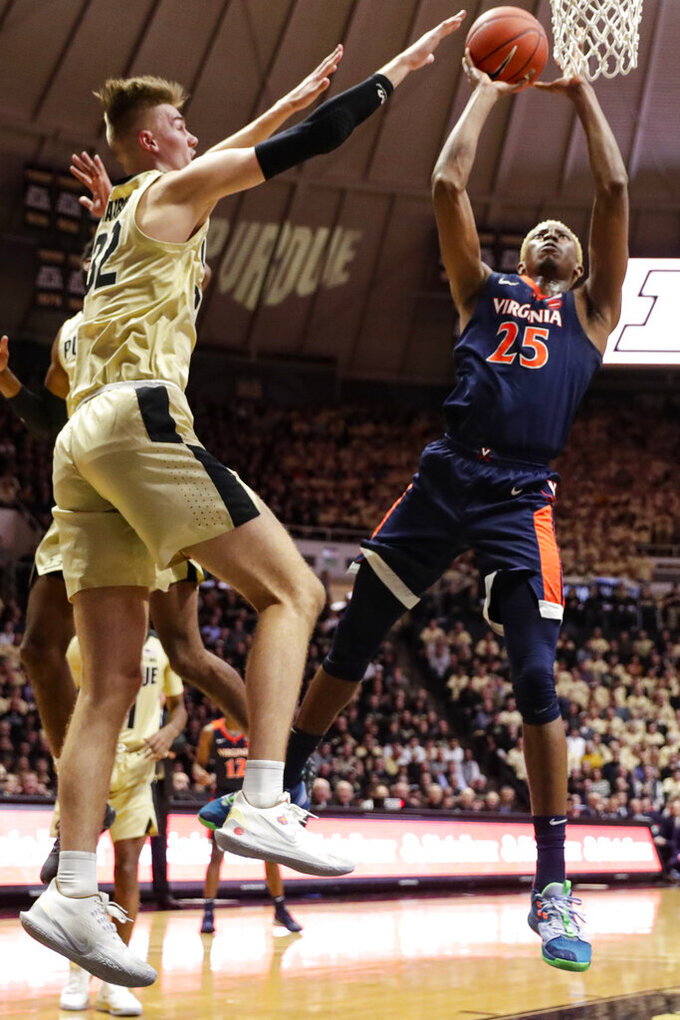 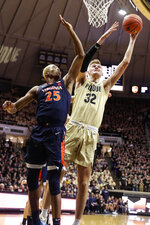 Sasha Stefanovic made sure it paid off.

Just hours after learning he would make his first career start, the sophomore guard poured in a career-high 20 points, Jahaad Proctor added 16 and the Boilermakers shut down No. 5 Virginia with a 69-40 rout in the ACC/Big Ten Challenge.

“Anytime you want to loosen up a defense that’s trying to prevent the ball from getting into the paint — and they’re so good at that — you’ve got to be able to make some shots," Painter said. "You can see tonight, he (Stefanovic) can really change some things with his ability to shoot.”

It was a milestone night not just for Stefanovic.

For the first time in the 52-year history of Mackey Arena, the Boilermakers (5-3) beat a top-five team from outside the Big Ten. They held their sixth straight opponent under 60 points, their longest stretch since 2010-11. And yes, they even got the satisfaction of snapping the Cavaliers' 13-game winning streak, a little more than eight months after Virginia outlasted Purdue in overtime during a classic Elite Eight game in the NCAA Tournament.

This time, Purdue left nothing to chance.

Stefanovic started the game with three straight 3-pointers to help the Boilermakers take charge early. He finished with six 3s and played a big part in helping the Boilermakers seal it, too.

And a matchup that was expected to be a low-scoring game between two of the nation's stingiest defenses never materialized. Instead, the Boilermakers made it look easy against the defending national champs by making 13 3-pointers — the most allowed by Virginia (7-1) all season.

“When you go against a team that's that well-coached and that intense and that physical, it kind of takes your breath away,” Cavaliers coach Tony Bennett said. “We played on our heels all game and I had a feeling there was going to be extra motivation with that setting.”

Jay Huff had 11 points and Mamadi Diakite finished with 10 to lead Virginia, which finished with its lowest point total since a 65-39 loss to Florida in March 2017.

After the teams opened the game with four straight baskets, Purdue dug in, locked down and seized control with a 12-0 run over nearly seven minutes to take a 26-9 lead late in the first half.

Virginia never got closer than 12 the rest of the game and it only got worse in the second half when Purdue extended a 32-17 halftime lead to 43-22 in less than five minutes.

Even after the Cavaliers looked as though they might make a charge, cutting the deficit to 51-36 with 7:37 left, the Boilermakers scored 16 in a row.

“We've been struggling to shoot it lately," Proctor said. “”When Sasha gets it going, it makes the game a lot more fun. It makes it easier. So I want to thank Sasha for that one.”

Virginia: There's no doubt the Cavaliers can play defense, but they need to find answers on offense and fast. Virginia shot 37.2% from the field, was 4 of 24 on 3-pointers and had 16 turnovers. The Cavaliers have scored fewer than 50 points in three straight games.

Purdue: The Boilermakers appear to be hitting their stride just in time for the start of conference play. They've won two straight over ranked teams by getting physical and tough.

Virginia: Had its season-low point total in the first half. ... The Cavaliers came into the game allowing the fewest points in the nation, 40.8 per game, but gave up 32 in the first half and a season high in the game. ... Virginia had won seven straight road games dating to last season and their previous five in the ACC/Big Ten Challenge.

Purdue: The Boilermakers had lost five straight at Mackey Arena against top-five teams from other conferences. ... Matt Haarms had 11 points and five rebounds, and Eric Hunter Jr. finished with 10 points, five rebounds and four assists. ... Purdue has beaten the defending national champions each of the past two seasons.

Virginia: “It’s painful," Bennett said. “This was a real physical, hard-nosed, tough team. That's what the ACC is about, too. So we're going to have to tighten the screws and get better and better.”

Purdue: “Last year happened, there’s nothing you can do about it now," Stefanovic said. “We just came in and wanted to fight them and just do what we do best. And I think we did it.”