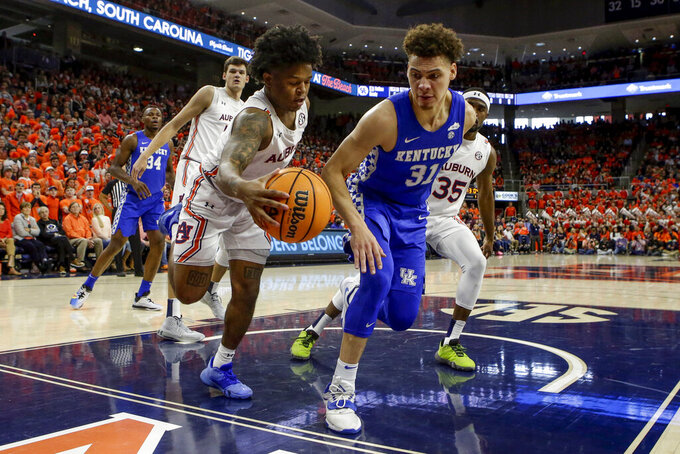 Auburn guard Wendell Green Jr. (1) and Kentucky guard Kellan Grady (31) battle for a ball as it goes out of bounds during the first half of an NCAA college basketball game Saturday, Jan. 22, 2022, in Auburn, Ala. (AP Photo/Butch Dill)

AUBURN, Ala. (AP) — Students set up camp outside Auburn Arena for at least 24 hours, waiting to get into the biggest home game in years.

The second-ranked Tigers made it worth the wait.

Walker Kessler scored 19 points and K.D. Johnson added 17, helping Auburn keep its hot streak alive and make a case for the top ranking with an 80-71 victory over No. 12 Kentucky on Saturday.

The Tigers (18-1, 7-0 Southeastern Conference) rallied from a 10-point deficit to win their 15th straight in likely the biggest home game since the arena opened in 2010. It was big enough that students at the traditional football school were pitching tents by Friday morning and endured the cold weather overnight to make sure they got in.

“To me it felt like a movie,” Johnson said. “I never played in anything like that. It's just so fun.”

The Tigers, who have matched the highest ranking in program history, are hoping to move up to the top spot for the first time. Fans chanted No. 1 in the final moments, hoping their team will supplant Gonzaga.

“Sometimes it's hard to have such high expectations be lived up to,” Auburn coach Bruce Pearl said. “But I don’t think there’s any question that that game and that environment lived up to anybody’s expectations.”

Kentucky’s No. 2 scorer, TyTy Washington, only played eight minutes and scored four points before being helped off the court with a left ankle injury. He didn’t return.

“That hurt us. No excuse though,” Wildcats coach John Calipari said. "We had our chances to win. We had breakdowns defensively.

“Defensively, the lob play, which we just kept telling the guys get off, but they just didn’t do it. They’ve done this to a lot of teams, but it was something that we thought we could guard.”

Johnson made 3 of 5 3-pointers for Auburn. Kessler hit 8 of 10 shots and had seven rebounds. Jabari Smith had 14 points and seven boards for the Tigers, who hit their first 15 free throws in the second half.

Wendell Green Jr. was scoreless for the first 28 minutes, then hit a pair of 3-pointers in a 25-second span and finished with 11 points.

Oscar Tshiebwe had 16 points, 14 rebounds and four blocked shots for Kentucky (15-4, 5-2) and was already hoping for a rematch.

“I don't think they're better than us," Tshiebwe said. "I think we’re going to beat them. I want to play them again.”

Kellan Grady made 4 of 7 3-pointers and scored 17 points. Sahvir Wheeler, Johnson's former teammate at Georgia, also scored 17 points and had four assists but was also dealing with an apparent leg injury late.

The Tigers, who trailed by 10 points during the first half, took a 64-52 lead with 6:07 remaining. Johnson hit three free throws after getting fouled on a 3-point shot — as Jaylin Williams and Jabari Smith had earlier in the half.

Grady's 3-pointer from the right corner cut it to four points with 3:20 to play.

“I see why they call it The Jungle,” Grady said. “I’m not going to go on and on about how awesome their fans are, but this is obviously an electric atmosphere and a tough place to play.”

The Wildcats scored 13 consecutive points to build a double-digit lead six minutes into the game. Auburn managed to whittle it down to 33-29 by halftime with back to back dunks by Kessler in the final 38 seconds.

“It doesn’t faze us when we get down,” Johnson said. “We just keep playing, we don’t get rattled. We just stay together and make the comeback.”

Kentucky was short-handed without Washington and cooled off after a hot start. The Wildcats did shoot 50% (29 of 58). A team that came in leading the nation in rebound margin was outrebounded 27-26, with Tshiebwe grabbing more than half.

Auburn made 26 of 44 shots (56.8%) to outpace the league's highest scoring team. The Tigers have won six of the last 11 meetings in a series mostly dominated by Kentucky historically.

The Tigers are hoping this win, coupled with a blowout of last-place Georgia, will be enough to secure their first No. 1 ranking. Kentucky likely won't fall far after beating Texas A&M in mid-week.