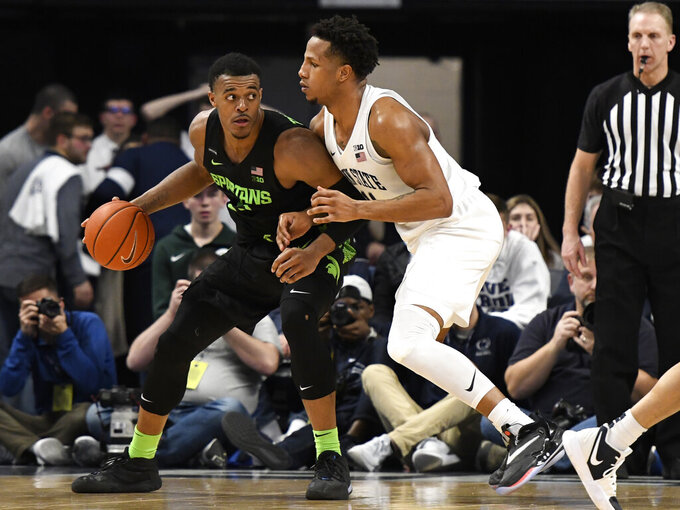 What to watch in the Big Ten this week:

Michigan State (21-9, 13-6) has won four straight and with a win over the Buckeyes (21-9, 11-8) would claim a third straight Big Ten regular-season championship. The Spartans, in the middle of the pack a month ago, won 78-66 at No. 9 Maryland last Saturday and turned in one of their most impressive performances of the season in erasing a 19-point deficit and beating No. 20 Penn State 79-71 on the road Tuesday. Tom Izzo's team always is dangerous this time of year. With Cassius Winston and Xavier Tillman Sr. providing leadership, the Spartans look to be on the verge of another March run.

Michigan State, Maryland and No. 24 Wisconsin have locked up double byes for the Big Ten Tournament, and Illinois would secure the fourth and final one with a win over Iowa on Sunday. Maryland and Wisconsin are tied with Michigan State at 13-6 in the conference and still alive for the top seed in the Big Ten Tournament. On the other end of the bracket, Northwestern, Nebraska and Minnesota are locked in among the bottom four seeds that will have to play Wednesday, with the fourth still to be determined.

Michigan State's Rocket Watts. The freshman guard has played a key role on both ends of the floor the last three wins. He scored 18 points against Penn State, 13 against Maryland and 21 against Iowa. He also shut down Penn State's Myreon Jones in the second half of the Spartans' comeback win, and he was the main defender on Maryland's Anthony Cowan, who made no 3-pointers after hitting five and scoring 24 points in the Terrapins' win over MSU on Feb. 15.

Maryland goes into its Big Ten Tournament first-round game Friday in line to be a No. 1 seed in the NCAA Tournament, and the conference is projected to land a nation-leading eight bids. ... Iowa senior guard Kathleen Doyle was voted conference player of the year by both the coaches and a media panel. It's the second straight year an Iowa player took the top honor. Megan Gustafson was the winner in 2019 and also consensus national player of the year. ... Northwestern's Joe McKeown was named Big Ten coach of the year.