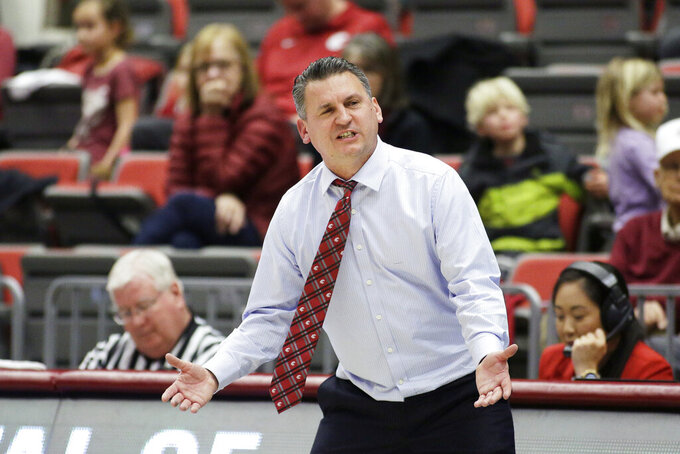 FILE - In this Feb. 23, 2020, file photo, Washington State head coach Kyle Smith reacts to an official's call during the second half of an NCAA college basketball game against Stanford in Pullman, Wash. Washington State had a surprisingly good season in Smith’s first year, but many of the key players from last year’s team are gone. No matter. Smith put together a great recruiting class and the Cougars are confident heading into this pandemic-delayed season. (AP Photo/Young Kwak, File)

Keeping the Cougars moving forward means building on that success in Year 2 with a number of key players having moved on.

The Cougars went 16-16 last year, 6-12 in the Pac-12, and won their first game in the league tournament in a decade when they beat Colorado before the rest of the tournament was canceled because of the coronavirus pandemic.

Continuing the rebuild of the Washington State program will be helped by a terrific recruiting class put together by Smith that gives the Cougars confidence going into the upcoming season. The 2020 recruiting class was ranked No. 33 nationally and No. 4 in the Pac-12.

One area the Cougars needed help was in the low post and they got it.

“We’re longer, quicker. We’ve got size,” Smith said. “We’re still a little thin in the ball-handling responsibilities, so we’ve got to emphasize on doing a good job there.”

Last season, 7-footer Volodymyr Markovetskyy was the only player on the roster who stood above 6-foot-9. The Ukrainian center has some company this year, thanks to the additions of 6-foot-10 Efe Abogidi of Nigeria and 6-foot-10 Dishon Jackson.

Jackson, a four-star player out of California, is one of the highest-rated recruits in Washington State history after averaging 13.8 points, 9.5 rebounds and 2.9 blocks during his senior season of high school.

Two more high-profile signees were Andrej Jakimovski of Macedonia and Carlos Rosario. Both are multifaceted players who will give the Cougars additional ball-handling options without sacrificing size and length.

All the newcomers will help balance a roster that returns only one player — guard Isaac Bonton — who started more than 20 games last season.

Bonton was one of the Pac-12’s highest scorers in conference games, averaging more than 17 points, and he proved he could carry the offensive load on nights leading scorer C.J. Elleby wasn't at his best.

The Cougars will be replacing three starters, most notably Elleby. He was an All-Pac-12 selection who left school early to take his chances in the NBA draft. Also gone are forward Jeff Pollard, the emotional leader of last year's team, and guard Jervae Robinson, a member of the conference all-defense team.

Elleby will be hard to replace. He had a breakout season as a sophomore, averaging 18.4 points, 7.8 rebounds, 1.9 assists and 1.8 steals per game. But his departure continued a recent trend in which Washington State stars either leave for the pros or transfer to other programs.

Of the incoming freshmen, Smith indicated Jakimovski, Bamba and Koulibaly have the best chance to see floor time immediately. As with everything else, Smith will use data to make those decisions. “The way we do things is ‘nerdball.’ You earn it,” Smith said. “So, it’s based on what you do in practice.″

Smith said that with all the newcomers the program’s three main pillars – defending, ball-handling and rebounding – will stay intact. “Those three have to maintain,” Smith said. “It’s hard, because we have to be better offensively; efficiency and sharing the ball. So, that takes up time in practice. We really dedicated a lot of time to trying to get tough, trying to get tough enough to compete and give yourself a chance.”

The nonconference schedule has not been finalized, although Washington State plans a multi-team event in Pullman around Thanksgiving. The Cougars open Pac-12 play against Oregon State on Dec. 2. That will be followed by a second Pac-12 game on Dec. 5 at Colorado. The Cougars begin conference play in earnest on Dec. 30. “I come in here every day hoping we get something finalized,” Smith said. “I think people are hungry to see some college basketball and it’s nice we’re going to be able to provide that.''