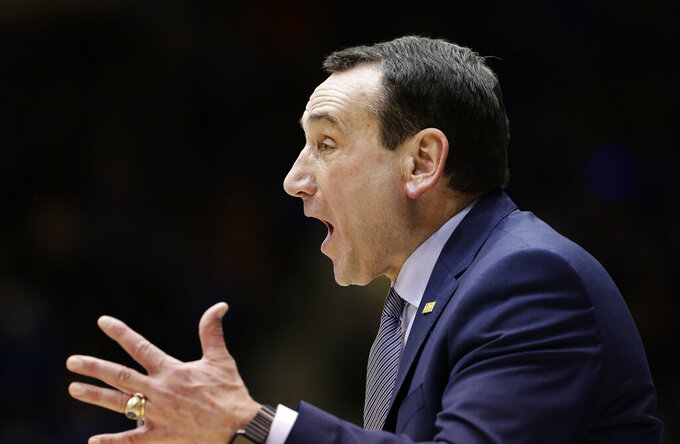 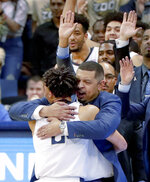 PITTSBURGH (AP) — Jeff Capel needed a landing spot, a place to recharge and re-evaluate after getting fired by Oklahoma in 2011. Duke coach Mike Krzyzewski came to his former point guard with a simple offer.

"It worked out pretty well, too," Krzyzewski said.

Over the next seven years, Capel established himself as one of the best recruiters in the country, helping the Blue Devils reload every fall with some of the most talented high school players in the country. He grew so comfortable sitting next to Krzyzewski — absorbing what he could from the man he considers family — Capel didn't leap at the first (or the second or third) chance to get back to running his own show.

Not until March, when Pittsburgh called with an opportunity Capel couldn't pass up. Ten months later, the energy Capel promised he would bring to the floundering program has returned. On Tuesday night, he will get a chance to see how far Pitt (12-6, 2-3 Atlantic Coast Conference) has come when the Panthers face Krzyzewski and the second-ranked Blue Devils (15-2, 4-1).

"It will probably be weird," Capel said.

A season after going winless in the ACC, Pitt already has victories over Louisville and Florida State , both of them coming in front of raucous crowds at the Petersen Events Center that stirred memories of the program's not-so-distant past under Ben Howland and Jamie Dixon.

Capel's immediate impact has reinvigorated the Panthers. Just as his mentor knew it would.

"He's done a terrific job," Krzyzewski said. "He selected a great staff and then he embraced Pittsburgh. Not just the school but the city. And he understood right from the beginning that Pittsburgh basketball was good before he got there. It just hasn't been good for a little bit. He reignited the brand while doing his stuff too. It wasn't just Jeff Capel and what he was doing (but) bringing the past (back) and introducing the future of what his vision would be. I think he's done a masterful job of that."

Pitt's improvement is two-fold. Even with a truncated chance to upgrade the roster, Capel signed Xavier Johnson, Trey McGowens and Au'Diese Toney last spring in the span of a few days. The three freshmen have provided the Panthers with a massive jolt. Johnson leads the team in scoring, McGowens is the only freshman to drop 30 points in a game — something he has done twice this month — and the 6-foot-6 Toney plays with an edge Pitt has sorely missed in recent years.

It's not just talent, however, that has allowed Pitt to get it together. Capel has instilled a combativeness that didn't exist under predecessor Kevin Stallings. Look no further than Saturday's 74-63 loss to Syracuse as proof. The Panthers fell behind by 12 in the first half and were on the verge of getting blown out only to get back within three by the break. Another long offensive dry spell allowed the Orange to push their advantage to 19, but Pitt scrambled back to make it respectable, leading Syracuse coach Jim Boeheim to praise Capel for doing the "best" coaching job in a conference that as of Monday had six teams in the AP Top 25.

Though not a believer in moral victories, Capel understands he is in the early stages of building something. While the project remains years away from completion, he is trying to set the foundation now, built on something he learned during his tenure as Krzyzewski's top lieutenant.

"You see the unparalleled success that Coach K has had and that the wins, the championships and all those things, it's glamorous," Capel said. "But at the end of the day it comes down to fighting and there's no better fighter than him and what he's instilled in the program, and I've tried to instill that in our program."

The Panthers will need to rely on that against the bigger and deeper Blue Devils. Though freshman guard Tre Jones almost certainly will not play while recovering from a shoulder injury, Duke still has Zion Williamson, RJ Barrett and Cam Reddish — all players Capel helped bring to Durham.

As precocious as Johnson, McGowens and Toney have been, they are not quite at the same level as Duke's freshmen. Not that Capel cares. He will walk onto the floor on Tuesday night, shake the hand of the man he has known for more than half his life and then huddle up with his players and offer a reminder. Yes, Pitt's basketball might be on the way back. Still, there's only one way to get there.