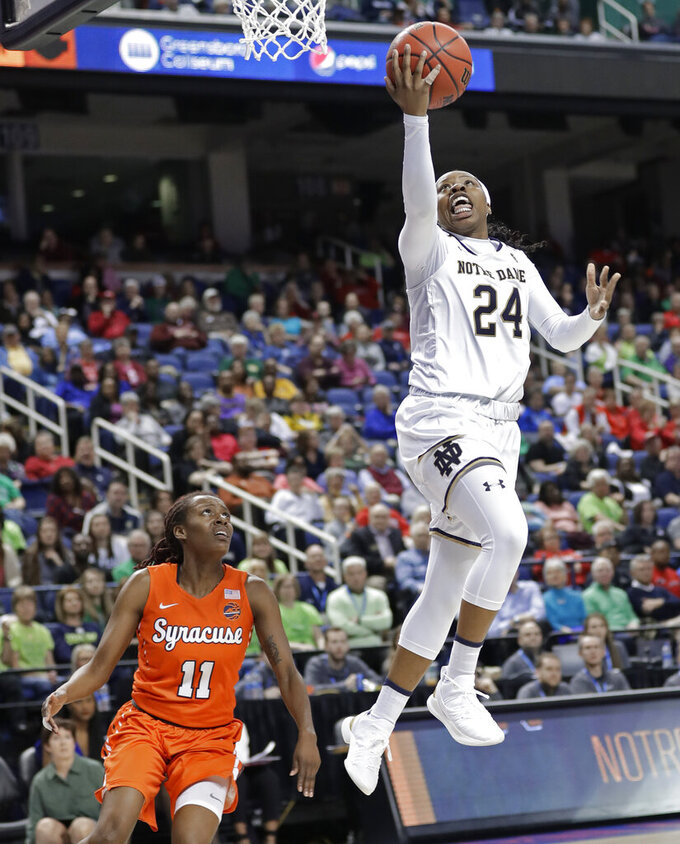 FILE- In this March 9, 2019, file photo Notre Dame's Arike Ogunbowale (24) drives to the basket past Syracuse's Gabrielle Cooper (11) during the second half of an NCAA college basketball game in the Atlantic Coast Conference tournament in Greensboro, N.C. The heroine of Notre Dame’s national championship run last year, who won both Final Four and title games with dramatic, last-second shots, is ready for her last ride through the bracket, starting Saturday when the Fighting Irish takes on Bethune-Cookman in the first round. (AP Photo/Chuck Burton, File)

The study released Tuesday from The Institute for Diversity and Ethics in Sport (TIDES) at Central Florida also found a significant gap in graduation rates between black and white men's players. But institute director Richard Lapchick said that gap was the smallest it had been in the study's history, while men's players posted their highest Graduation Success Rate (GSR) scores and the women's players tied their own high marks.

"Those are both obviously good things," said Lapchick, the lead report author. "But the (gender) gap is still substantial."

The study looked primarily at the GSR, which was developed to allow the NCAA to track the progress of Division I student-athletes for six years following their entrance to schools. GSR doesn't penalize schools for athletes who leave in good academic standing and counts transfers at their new schools, while a federal graduation rate would consider them non-graduates and doesn't factor in those common roster movements.

Lapchick said the TIDES study examined data for players who would've entered school in 2011, starting a clock that expired in 2017.

The overall GSR for women was 92 percent compared to 81 percent for the men, according to the study.

"That one has been consistently so good that I would think this rise in their gap is an anomaly," he said.

When comparing the federal rate and GSR, both black and white basketball players on the men's and women's side significantly outperformed their non-athlete counterparts.

"It says to me that student-athletes are getting more attention to make sure that they're able to stay eligible or to hopefully to graduate," Lapchick said. "And typically African-American students that come to campus don't have those resources poured into them.

"So it says to me that the student development people in universities as a whole need to model some of the support that student-athletes are getting for the entire student body."