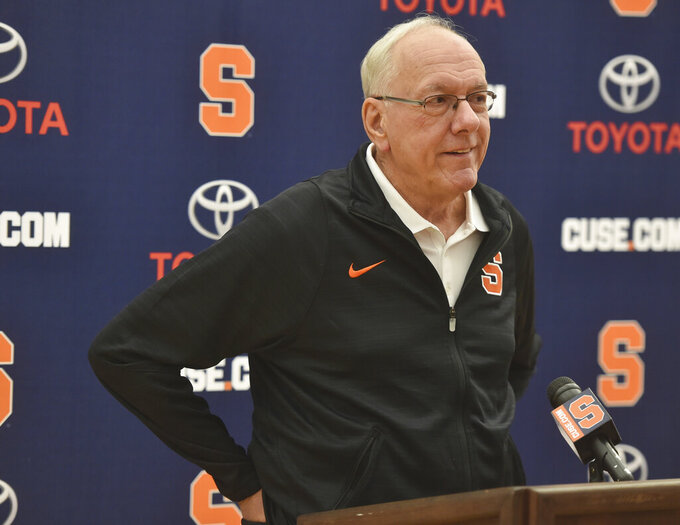 FILE - In this Oct. 17, 2017, file photo, Syracuse coach Jim Boeheim speaks to reporters during the NCAA college basketball team's media day in Syracuse, N.Y. The Carrier Dome was built in the late 1970s at a cost of $26.85 million. “I remember. I was very skeptical playing in there," Boeheim said. (Scott Schild/The Post-Standard via AP, File)

SYRACUSE, N.Y. (AP) — Syracuse basketball coach Jim Boeheim is being sued over a fatal accident he was involved in nearly two years ago.

According to Syracuse.com, the family of Jorge Jimenez, who was struck and killed by an SUV driven by Boeheim in February 2019, alleged the coach's actions were “negligent, reckless and wanton.” The four-page lawsuit was filed Monday in Onondaga County Supreme Court by attorney Terence O’Connor and seeks an unspecified settlement.

The accident occurred amid icy conditions on the night of Feb. 20, 2019, after a mid-week game in the Carrier Dome. The 51-year-old Jimenez was a passenger in a car that had skidded on the eastbound side of Interstate 690 heading out of the city and came to a stop perpendicular across two of three lanes. The victim had exited the disabled car and was struck and killed near the guardrail when Boeheim approached the scene and swerved to avoid hitting the car.

A police report said Boeheim was not driving “reckless, unreasonable or with gross negligence.” Onondaga County District Attorney William Fitzpatrick concluded that Boeheim was speeding, but the accident investigation by Syracuse police concluded that the crash could still have been deadly even if the Hall of Fame coach had been following the speed limit. There was no evidence that drugs or alcohol played a role and no charges were filed.

According to state law, the family had three years to file a lawsuit. A call from The Associated Press seeking comment from O'Connor was not immediately returned. According to Syracuse.com, Boeheim had not yet responded in court papers.

The 75-year-old coach declined comment through a university spokesman.