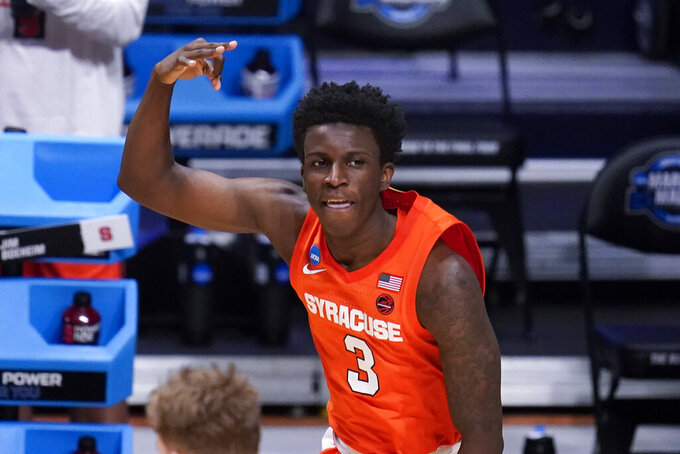 Syracuse forward Kadary Richmond (3) reacts to a three-point basket against Houston in the second half of a Sweet 16 game in the NCAA men's college basketball tournament at Hinkle Fieldhouse in Indianapolis, Saturday, March 27, 2021. (AP Photo/Michael Conroy)

SYRACUSE, N.Y. (AP) — After Syracuse was eliminated by Houston in the round of 16 in the NCAA Tournament, Orange coach Jim Boeheim said he expected players to leave the program. He was spot on.

Richmond is the biggest loss because of his defensive contributions in the Orange's zone defense and his ability to run the offense as a freshman. He played in all 28 games, with three starts when junior shooting guard Buddy Boeheim was out recovering from COVID-19, but averaged just 21 minutes playing behind sophomore Joe Girard. Richmond averaged 6.3 points, ranked third on the team with 86 assists, topped the team with 46 steals, and had 14 blocks.

Braswell, a 6-foot-7 redshirt sophomore who was injured most of the previous season, averaged 12.1 minutes in 2020-21. He became a factor off the bench near the end of the season. Over a four-game stretch prior to the loss to Houston on Saturday night, he averaged 25 minutes and scored 37 points on 14-of-22 shooting.

“We’re going to have to adjust to it and start recruiting in the transfer portal,” Boeheim said. “Being able to transfer and play right away means if you have any issue at all, any issue, you’re going to leave.”