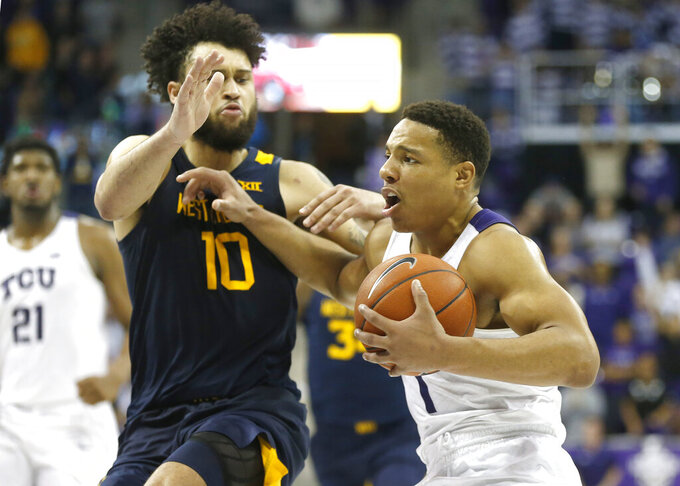 TCU guard Desmond Bane (1) is called for an offensive foul on West Virginia guard Jermaine Haley (10) during the second half of an NCAA college basketball game, Saturday, Feb. 22, 2020 in Fort Worth, Texas. TCU won in overtime. (AP Photo/Ron Jenkins)

FORT WORTH, Texas (AP) — Desmond Bane didn't think a foul should have been called against him on the shot that appeared to be a game-winner in regulation for TCU.

The Horned Frogs rendered the whistle moot in overtime.

Kevin Samuel scored six of his 19 points in the extra period and TCU extended No. 17 West Virginia's Big 12 road woes with a 67-60 victory over the Mountaineers on Saturday.

Bane sent the crowd into a frenzy on a driving layup with 0.9 seconds left, but the senior guard was called for pushing off on Jermaine Haley as he went up for the shot after racing the length of the floor off a West Virginia miss.

Jaire Grayer broke the 55-all tie with his only 3-pointer to start overtime, and Samuel hit two buckets and two free throws as the Mountaineers lost their fifth straight road conference game. They beat TCU by 32 at home in January.

“Haven’t made shots,” said coach Bob Huggins, who stayed tied with Dean Smith for sixth on the all-time coaching victories list at 879. “But I mean, we haven’t made shots at home either.”

Samuel made all seven of his shots and had eight rebounds with five blocks, RJ Nembhard scored 16 points and Bane finished with eight points and 10 assists in TCU's second home victory over a ranked team. The Horned Frogs beat then-No. 18 Texas Tech in January.

“I hope it gives some of the younger guys confidence that it can be done,” said Bane, a senior. “We went out there and got flat out embarrassed in West Virginia. To come back here and beat that team is huge for us. Hopefully we can build off this moving forward.”

West Virginia finished 2 of 17 from 3-point range, including an air ball on an open look for Sean McNeil with the Mountaineers down by three in overtime.

McNeil also had a desperation heave from past half court bounce off the back of the rim when West Virginia managed to get off a shot after the call against Bane.

The Mountaineers missed four straight free throws late before Oscar Tshiebwe made the second of two for a 55-all tie with 1:03 to go. Miles McBride couldn't finish off a possible three-point play, and Culver missed two free throws.

Culver scored six points and Sherman had the last five on a 15-1 run that put West Virginia up 25-15 in the first half.

West Virginia: Tshiebwe, the freshman leading West Virginia in scoring, was held to just one point and has attempted just six shots, with one make, the past two games. The Big 12's second-leading rebounder wasn't as much of a factor inside either, finishing with five boards after six straight games with at least eight.

“We sat him most of the first half because he just wouldn’t get back to his man,” Huggins said.

TCU: The slide toward the bottom of the standings has been steady since the Horned Frogs started 3-0 in the Big 12 after getting voted last by league coaches in a preseason poll. But this is quite a boost coming off seven losses in eight games.

The Horned Frogs scored the final eight points of the first half, starting with a 3-pointer from guard Francisco Farabello. The only points for the freshman from Argentina came moments before he ended up on the floor holding his head following a scramble for a loose ball. Farabello had to be helped to the locker room and was ruled out with a concussion.

KNOCKING DOWN THE FREEBIES

Samuel, a 34% shooter on free throws coming into the game, was 5 of 6 from the line. The two in overtime put the Horned Frogs up six with 1:19 remaining.

“Obviously Kevin was terrific, so happy for him, how hard he’s worked on his free throws,” coach Jamie Dixon said. “And to go and knock those down, to be 5 of 6 at the end of the day is a great thing.”

West Virginia: At Texas on Monday.

TCU: At Iowa State on Tuesday.