Teams led by experienced players have edge amid pandemic 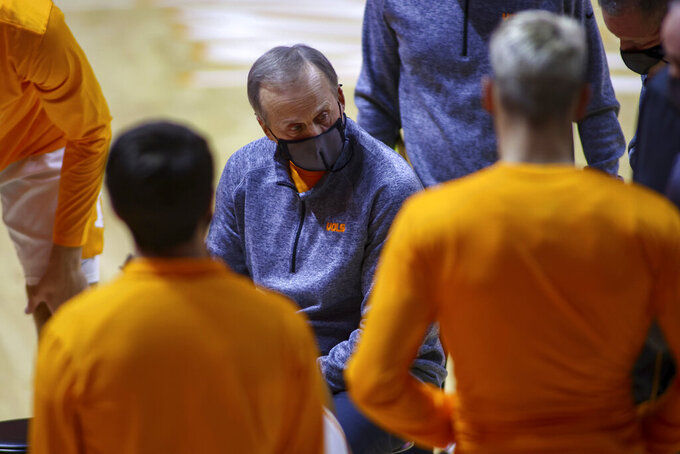 Joshua Langford is part of a Michigan State team leaning on upperclassmen in at the top of its rotation, including multiple players from a Final Four squad two seasons ago.

It’s the kind of veteran experience that has given Tom Izzo's 12th-ranked Spartans and some of the nation’s top men's basketball teams an early edge, providing continuity amid the constant uncertainty and changing schedules during the coronavirus pandemic.

That type of leadership has perhaps never been more valuable.

It’s been a key element for good starts by teams like No. 1 Gonzaga, No. 2 Baylor and No. 4 Iowa as coaches and players are forced to navigate pauses, postponements, cancellations and quarantines that have interrupted routines and training regimens.

The lack of that experience by teams whose best players are young also is one reason bluebloods like Duke and Kentucky have have struggled.

“When you’re switching opponents on the fly,” Baylor coach Scott Drew said, “you’re relying on habits and how quickly your young men can pick up what you want them to execute in the games. That’s where experience really does help.”

Wildcats coach John Calipari recently zeroed in on that, too, noting: “The veteran teams have a huge advantage this season.”

“The inexperienced teams, which I think we’re one of the least experienced teams with 10 new guys that have never played together, we’re at a big disadvantage,” Calipari said a day before Kentucky fell to 1-4 with a Dec. 12 loss to Notre Dame.

Looking at some of the nation’s top teams – even as Gonzaga and Baylor dealt with recent coronavirus-related pauses – it’s easy to see Calipari’s point.

The Bears have junior Jared Butler as a preseason Associated Press All-American among six juniors or seniors in the main rotation for a team that beat No. 18 Illinois.

There’s also the prolific Hawkeyes, who have their own preseason AP All-American in senior Luka Garza – averaging a national-best 29.3 points – and junior Joe Wieskamp averaging another 15.9 points. They lead an Iowa team ranked No. 1 in KenPom’s adjusted efficiency rankings as of Monday's games by scoring 119.5 points per 100 possessions entering Tuesday's Big Ten opener against Purdue.

And it was a senior in guard Matt Coleman III who hit the step-back jumper with 0.1 seconds left to lift No. 10 Texas past No. 17 North Carolina for the championship in this month's relocated Maui Invitational.

They’ve all been around long enough to know what to expect – in a normal year, anyway.

“We’re an experienced team,” Iowa redshirt senior Jordan Bohannon said after the Hawkeyes’ win against UNC earlier this month. “We know what to do to get things done and win games.”

Freshmen adjusting to the college level or sophomores to a new role despite no exhibition games amid virus-driven upheaval is a formula that has led to challenges for many.

Tennessee coach Rick Barnes has seen the impact on the Vols roster. The eighth-ranked Volunteers (5-0) had their first four games canceled amid COVID-19 concerns that included the coach’s own positive test, and didn’t take the court for their first game until Dec. 8.

“Our older guys, they’ve been able to handle the stops and starts better than the younger guys,” Barnes said.

And that’s where things get difficult for youth-laden squads like the unranked Wildcats — now 1-5 after Saturday's loss to UNC — and 20th-ranked Blue Devils.

Duke has 10 freshmen or sophomores and hadn't found the right flow in a 2-2 start while playing without the jolt from its famed homecourt advantage; the school holds games without the “Cameron Crazies” or any fans. The Blue Devils have home losses to Michigan State and Illinois, but w on at Notre Dame last week in their Atlantic Coast Conference opener with an improved performance that showed signs of growth.

“If you don’t have a veteran team, where you have a bunch of key guys coming back, really you’re kind of experimenting,” Duke coach Mike Krzyzewski said after the Illinois loss.

“You don’t know for sure what the offense will look like. We thought we could be more of an up-tempo, penetrate, kick, ballscreen (team), and be free shooters. Obviously that’s not going on. … So we’ve got to keep looking, keep looking.”