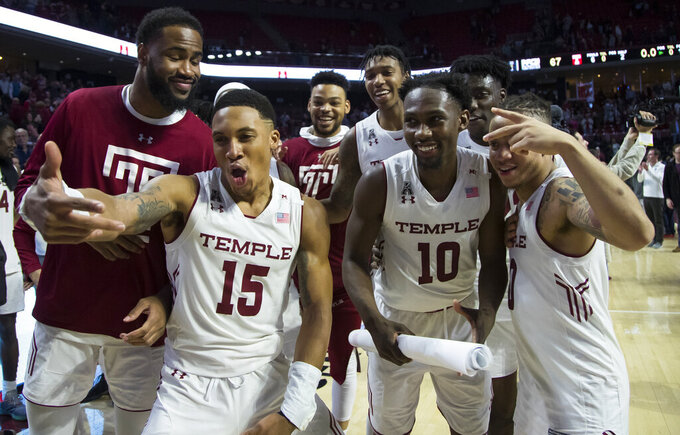 Temple celebrates the win after the second half of an NCAA college basketball game against Central Florida, Saturday, March 9, 2019, in Philadelphia. Temple won 67-62. (AP Photo/Chris Szagola) 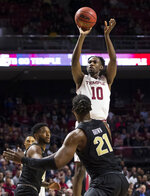 PHILADELPHIA (AP) — Temple coach Fran Dunphy needed a police escort off the Liacouras Center floor as the university community tried to say thanks and goodbye. Turns out, he was being guided to a celebratory water dousing upon entering the Owls' locker room.

Shizz Alston Jr. scored 21 points, Justyn Hamilton tied a career high with 13 and Temple got a critical 67-62 victory over No. 25 Central Florida on Saturday in Dunphy's final home game before he steps down at the end of the season.

"He's one of the best coaches in the country," Alston said. "I'm glad he's getting his just due."

Quinton Rose broke a 52-all tie with a highlight-reel slam over Central Florida's Dayon Griffin with 4:12 remaining, and Temple led the rest of the way. Rose scored nine of his 11 points in the second half for the Owls (23-8, 13-5 American Athletic Conference), who needed a win over a ranked team to help strengthen their bid for the NCAA Tournament.

Dawkins, who was a game-time decision before warming up, hit a 3-pointer with 19 seconds left to cut the deficit to three. Seven seconds later, after two Temple free throws, UCF's B.J. Taylor was fouled while shooting a 3-pointer. He made all three free throws to get the deficit to two, but Alston hit two foul shots at the other end to put the game away.

Temple used its length and athleticism to disrupt 7-foot-6 center Tacko Fall, who spent much of the evening in foul trouble. Fall finished with a season-low two points in nearly 20 minutes of action.

"They were very active," Knights coach Johnny Dawkins said. "But they usually are active. We're one of the best teams in the nation at valuing the basketball. I was shocked. That's a tribute to them."

Central Florida had a 15-7 lead early in the first half but then Temple ripped off 12 straight, including 10 with Fall on the Knights' bench, where he'd spend the last 9:47 of the first half after picking up his second foul. Temple, paced by Alston's 12 first-half points, led 35-34 at the break.

UCF made just nine of its 31 shot attempts (29 percent) in the second half.

Dunphy has coached the Owls since the 2006-07 season. Before that, he spent 17 years coaching across the city at Penn. Associate coach Aaron McKie, a former Temple and Philadelphia 76ers star, will take over the program next season. Tributes to Dunphy on Saturday included video messages from Duke coach Mike Krzyzewski and Philadelphia 76ers coach Brett Brown.

The final tribute came in the emptying of water bottles.

"I said it to the guys in the locker room after the game, I'm just so happy for them and proud of them," Dunphy said. "We're building memories here. I keep going back to my favorite Fred Shero quote: 'Win today and we walk together forever.'"

Central Florida: With Fall in foul trouble, Temple did its best work. UCF has plenty of firepower to make some noise in the AAC Tournament, but Fall's presence on the court (he was plus-6) gives them the best chance at winning.

Temple: The Owls scored a critical win against a surefire NCAA Tournament team. Their ticket is likely punched, but a win or two in the AAC Tournament wouldn't hurt.

Alston, Temple's resident bracketologist, was confident when asked after the game whether Temple was in position for an at-large bid.

His coach, though, wasn't as convinced.

"I love Shizz," Dunphy said. "What's he going to tell me, that this, this and this could all happen?

"He's a good man and I hope he's right. We've got a lot of games left to go and some basketball left to play."

Both teams head to Memphis for the American Athletic Conference Tournament. Temple and UCF have byes to the quarterfinals and start play on Friday.