Tennessee believes it has staying power as SEC contender 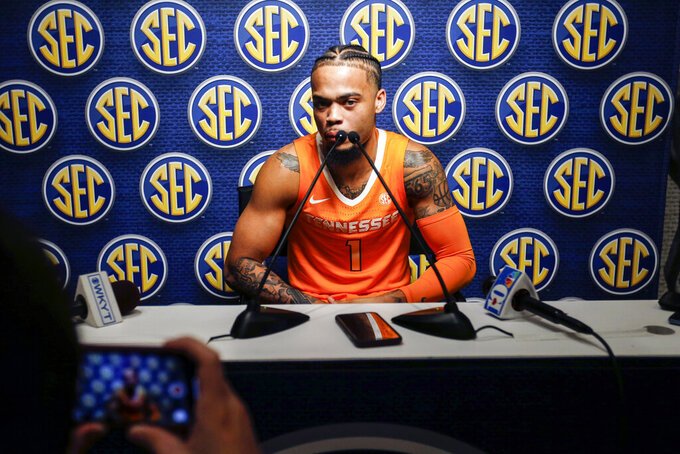 KNOXVILLE, Tenn. (AP) — Tennessee wants to show it has built the type of program that can withstand the loss of three NBA draft picks and remain a Southeastern Conference contender.

The Volunteers must replace All-America forward Grant Williams, all-conference selections Jordan Bone and Admiral Schofield and 105-game starter Kyle Alexander. That quartet helped Tennessee go 57-15 over the last two seasons, win a share of an SEC regular-season title in 2018 and earn a No. 1 ranking and Sweet 16 appearance last year.

Tennessee's returning players are eager to build on that success.

Tennessee will have to work hard to avoid taking a small step backward as the Vols chase their third straight NCAA Tournament berth.

The departures of Williams, Alexander and Schofield leave Tennessee with a major frontcourt void. The Boston Celtics selected Williams with the 22nd overall pick in the NBA draft. Schofield and Bone both were taken in the second round.

Tennessee needs the senior backcourt duo of Turner and Jordan Bowden to lead a young roster.

"We're just letting them know what the standard is, (that) we're going to work hard, we're going to fight every day to get better," Bowden said. "They've bought into it. They know what it takes."

"They got the taste of what it's like to be a really good basketball team and being a program people are excited about, and they want to see if they can obviously take it even further," Barnes said. "They know it's a little bit different because they've got so many young guys who've never tasted any of that, but (Bowden and Turner) have been great leaders, I will say that. They've shown great leadership. Now we just need the experience of playing games."

Some other things to know heading into Tennessee's 2019-20 season:

Tennessee has plenty of questions surrounding its frontcourt. The biggest one surrounds 7-foot Arizona State transfer and redshirt freshman Uros Plavsic, who is still waiting to learn whether the NCAA will grant a waiver enabling him to play for Tennessee this season.

The Vols also could use breakthrough seasons from juniors John Fulkerson and Yves Pons. Fulkerson's development has been hindered by a series of injuries. Pons has plenty of athleticism but hasn't emerged as a complete player.

Tennessee's expecting big things from five-star prospect Josiah-Jordan James, who was rated as the nation's No. 22 prospect in his class according to composite rankings of recruiting sites compiled by 247Sports.

James, a 6-foot-6 guard and the first top-100 recruit to sign with Tennessee in Barnes' tenure, is one of five true freshmen or redshirt freshmen on the Vols' roster.

"It's definitely going to be a lot of fun for us younger guys," James said. "I think there will be a learning curve. I would say we'll probably be pretty nervous going into the first game, but I feel like as the season gets going, as we play really good teams and as we start to jell, it will be a really good season."

"He kind of reminds me of a younger Grant," Bowden said. "The sky's the limit for Olivier."

Tennessee has 26 straight home victories to match Buffalo for the longest active home winning streak of any Division I team. Tennessee hasn't lost at home since falling 94-84 to Auburn on Jan. 2, 2018.

Tennessee has two games each with No. 2 Kentucky and No. 24 Auburn, visits No. 3 Kansas and hosts No. 6 Florida, No. 14 Memphis and No. 22 LSU. Joining Kansas and Memphis as high-profile nonconference opponents are Cincinnati, Wisconsin, Washington, Florida State, Murray State and either No. 23 Purdue or No. 25 VCU.

The Vols open the season Nov. 5 by hosting UNC Asheville.