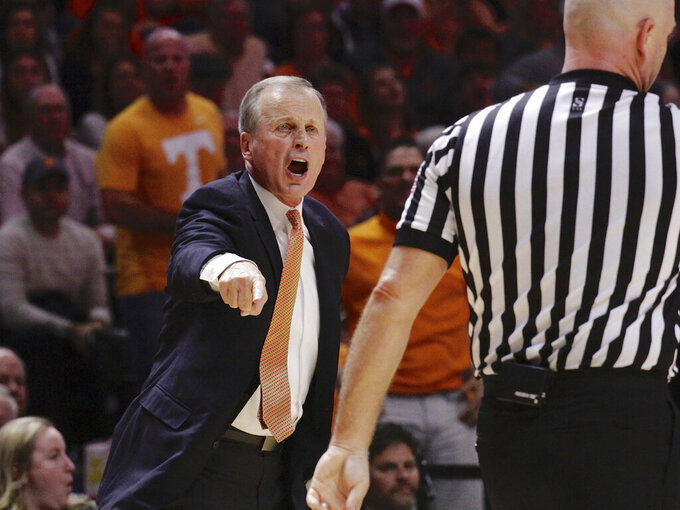 The last time Tennessee reached No. 1 in the AP Top 25 it lost to Vanderbilt the next day.

Back at No. 1 for the first time in 11 years, the Vols face a similar situation.

On Wednesday, they again play Vanderbilt right after becoming the nation's top-ranked team, this time hoping for a different outcome and a long stint at No. 1.

"Is it nice to ranked? Of course, because of the attention that comes to your program," Tennessee coach Rick Barnes said. "You do that by staying focused on what is at hand. You do that by playing basketball and not letting the outside noise in. That is where you find out how close you are as a team when you come unraveled."

Tennessee entered last week No. 3 in the AP Top 25 and won both of its games, rolling over Arkansas and outlasting Alabama.

While the Vols were taking care of their business, top-10 teams dropped all around them.

Top-ranked Duke lost to Syracuse without two starters, Cam Reddish and Tre Jones. Reddish returned from an illness against Virginia on Saturday, but Jones did not after injuring his shoulder against the Orange. The Blue Devils won anyway, knocking the Cavaliers from the ranks of the unbeaten.

Michigan also lost on Saturday, to Wisconsin, leaving the 1976 Indiana Hoosiers as the last Division I team to go undefeated.

Six top-10 teams lost last week, causing a jumble at the top of this week's poll.

Tennessee's first test will be in Nashville against the Commodores, who opened SEC play with five straight losses. Get by Vandy, the Vols still have to face gritty West Virginia, though that game will be in Knoxville.

"Every team in the top five is a No. 1 team. Every team in the Top 25 could potentially get up there," Tennessee forward Grant Williams said. "It's a long season. It doesn't matter what number you are at the halfway point. It's where you're at, at the end."

Kentucky has bounced back nicely after being run out of the gym by Duke in its opener.

The Wildcats (14-3, 4-1 SEC) have won four straight games after beating Georgia and then-No. 11 Auburn last week, moving them up four spots to No. 8 in this week's poll.

The road doesn't get any easier. Kentucky plays at No. 22 Mississippi State on Tuesday, then faces No. 9 Kansas on Saturday.

"They're better than last year," Auburn coach Bruce Pearl said after the Wildcats held on for an 82-80 victory on Saturday. "They're playing with a purpose."

A break in the conference season for the SEC/Big 12 challenge has created some top-notch match-ups on Saturday.

In addition to the blue blood Kentucky-Kansas game, No. 16 Auburn plays at No. 22 Mississippi State, and No. 20 Mississippi hosts No. 24 Iowa State.

Pearl's Tigers reached No. 7 in the AP poll earlier this season, but slid to No. 14 this week after the loss to Kentucky. Auburn also lost to Mississippi two weeks ago, but still has one of the nation's most talented rosters.

Mississippi State suffered consecutive losses to South Carolina and Ole Miss, but bounced back with wins over Florida and Vanderbilt last week.

The Rebels had been on a roll, winning 10 straight before losing by 14 at LSU at home. They beat Arkansas handily on Saturday.

Thursday has the week's only other games between ranked teams.

One is in the ACC, where No. 21 North Carolina State plays at No. 23 Louisville. The Cardinals moved into the AP Top 25 for the first time this season on Monday after beating Boston College and Georgia Tech last week.

The Big Ten has the other, with No. 6 Michigan State playing at No. 19 Iowa.

The Spartans turned their first game this week against a ranked opponent into a rout, rolling over No. 13 Maryland 69-55 on Monday. The Hawkeyes climbed four spots in this week's poll after beating Penn State and Illinois.