Tennessee has something to prove, and it's not NCAA seeding 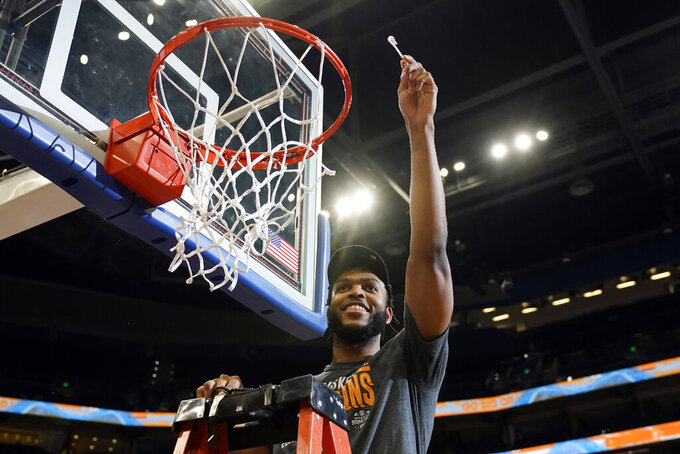 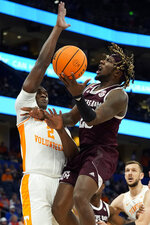 INDIANAPOLIS (AP) — Tennessee arrived in Indianapolis with a single focus and little interest in continuing the seeding debate.

Of course the Volunteers want to show the NCAA selection committee the Southeastern Conference tourney champs warrant a higher seed than No. 3 in the South Region. Yet, players had a steely-eyed vision on a new mission when they arrived Wednesday — winning a first-round game for the third time in five years and reaching a Final Four for first time in school history.

“It was good to see us set a goal to win the SEC Tournament and achieve that goal, but we also had a goal at the beginning of the year to win games in March, to get to the Final Four and win a national championship," Josiah-Jordan James said. “It starts with Longwood."

The 14th-seeded Lancers (26-6), from the small town of Farmville, Virginia, are making their first tourney appearance. Thursday's winner faces either sixth-seeded Colorado State (25-5) or 11th-seeded Michigan (17-14), which play in the day's first game.

The Wildcats are playing East Region games in Indy, turning the city into an SEC mecca for the second time in two months. Georgia beat Alabama for college football's national championship just down the road.

But the reality is seeding no longer matters. Winning — and advancing — does.

“This time of year, every team that’s part of the NCAA Tournament has earned the right to be here,” said Michigan coach Juwan Howard, who was part of the Wolverines original Fab Five. “There is no guarantee whether you have the experience or not that you are guaranteed a victory."

Michigan, a one-point favorite, will be without starting point guard DeVante’ Jones, who is in the concussion protocol. Howard said he will not be cleared before tip-off and he did not travel with the team.

The Volunteers, meanwhile, have won seven straight and are playing with confidence. And now, in the same building where they made a surprising first-round exit last March, Tennessee needs two more wins to reach a second Elite Eight and its first since 2010.

Tennessee's players can't wait to get the journey started.

“I’m happy to be back, I was excited that they put us back here,” James said. “I think everything is coming full circle, and I’m glad we have a chance to redeem ourselves.”

Juwan Howard will make his second straight appearance since returning from a five-game suspension for throwing a punch at a Wisconsin assistant coach.

A toned-down Howard saw his Wolverines lose to Indiana here last Friday, but when he returned Wednesday, Howard spoke with a steadier, more definitive voice. Whether it makes a difference is unclear.

But Howard did some introspection during his absence.

“I didn’t break my teeth. I may have broken a remote. I tossed and turned in my bed and my pillow was wet," Howard said “When you step away you get a chance to re-evaluate yourself and improve. I’m always asking what we can do better, going back and watching film."

While this is likely the first time many college basketball fans have heard of Longwood, the school's top guards have all been in the spotlight previously.

Justin Hill was a prep star in Houston. DeShaun Wade transferred from East Carolina in 2019-20, and Isaiah Wilkins played at Virginia Tech and Wake Forest before moving to Farmville. So, naturally, they're not awestruck.

But perhaps the most notable feature of the team is its ability to keep things in perspective, which is one reason coach Griff Aldrich thinks they wound up winning the Big South title. He even provided an example.

“DeShaun came in here -- I’m glad he’s not in here — but he was moody when he got to Longwood," Aldrich said. “I still remember at the beginning of his first summer with us, he was politely excused from practice because of that moodiness. He has just dramatically transformed as a young man to understanding our culture, then embracing it, and now he sets the standard."

TALE OF THE TAPE

Colorado State forward David Roddy has been described many ways over the years. It happens when you're a 6-foot-6, 255-pound former football player.

“Man, let me take a second. No, I don’t really care what people call me,” Roddy said. “That’s an interesting one. I think that’s a football reference, so I will take that as it is."

He's not just a good player. Roddy proved he has a quick wit when asked to compare Dickinson to another opponent he's faced this season.

“Creighton with (Ryan) Kalkbrenner has similar size," Roddy said. "Hunter Dickinson has a little bit more girth, I would say."

“I could be a WWE villain," Dickinson said. “That’s how I play. I’m at my best and most engaged when I’m out there playing with energy and fire. That’s what makes the game fun for me, that’s why I enjoy playing it.”