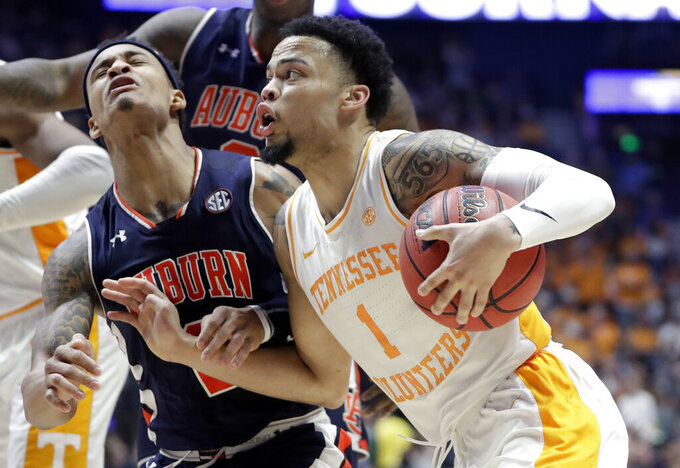 Tennessee's Lamonte Turner (1) collides with Auburn's Bryce Brown on his way to the basket in the second half of the NCAA college basketball Southeastern Conference championship game Sunday, March 17, 2019, in Nashville, Tenn. (AP Photo/Mark Humphrey)

KNOXVILLE, Tenn. (AP) — Tennessee heads into the NCAA Tournament seeking to regain the consistency that lately has been missing.

If the sixth-ranked Volunteers have any chance at earning their first Final Four berth in school history, it needs to happen quickly.

"March is a different vibe," Tennessee forward and Southeastern Conference player of the year Grant Williams said Monday. "Teams are going to hit shots they may not have hit before. Teams are going to miss shots they always make. It just depends on the day, and you have to come in with the mentality that you have to do your job, execute and be intense."

Tennessee (29-5) is the No. 2 seed in the South Region and faces Patriot League champion Colgate (24-10) in a first-round game Friday afternoon at Columbus, Ohio.

The Vols lost 63-62 in the second round last year to eventual Final Four participant Loyola-Chicago. With the nucleus of that team back this year, Williams said they're a more mature group now as they attempt to snap Colgate's 11-game win streak.

Tennessee demonstrated during the Southeastern Conference Tournament it still must learn to sustain success in order to make a deep postseason run.

Tennessee beat No. 7 Kentucky 82-78 in an SEC Tournament semifinal matchup that Vols coach Rick Barnes said was as intense and competitive as any his team will play in the NCAA Tournament. Then, less than 24 hours later, Tennessee blew an opportunity to win its first SEC Tournament since 1979 by falling 84-64 to No. 14 Auburn in its most lopsided loss of the season.

Barnes said he could sense five minutes into the Auburn game that his team was in trouble. He noted that Tennessee's players stuck together against Kentucky when the Vols trailed by eight points with less than five minutes left. That didn't happen when Tennessee fell behind against Auburn.

"Too many guys tried to do it themselves," Barnes said. "So that's the lesson to be learned. And the night before, we didn't do that, we stayed together. You ask me how you can 19 hours later go from being one team to the other team, I don't know. I can't answer that."

Tennessee also lost to Auburn in its regular-season finale to lose out on a chance to earn a share of the SEC regular-season title. The Vols have gone 6-4 over their last 10 games after reeling off a school-record 19 straight victories.

Barnes is entering his 24th NCAA Tournament and has experienced this event's highs and lows.

He reached the Final Four with Texas in 2003 and led the Longhorns to regional finals in 2006 and 2008, but he hasn't advanced beyond the round of 32 since that 2008 regional final. His overall NCAA Tournament record is 21-23.

Barnes understands that a disappointing loss in a conference tournament often has no bearing on how a team fares in the NCAA Tournament. His 2003 Texas team lost to Bobby Knight's Texas Tech squad in a Big 12 quarterfinal.

"And that was the year we went to the Final Four," said Barnes, who noted that Knight said, "'This is good for you. Now go win a national championship.'"