Tennessee Vols looking for answers at end of regular season 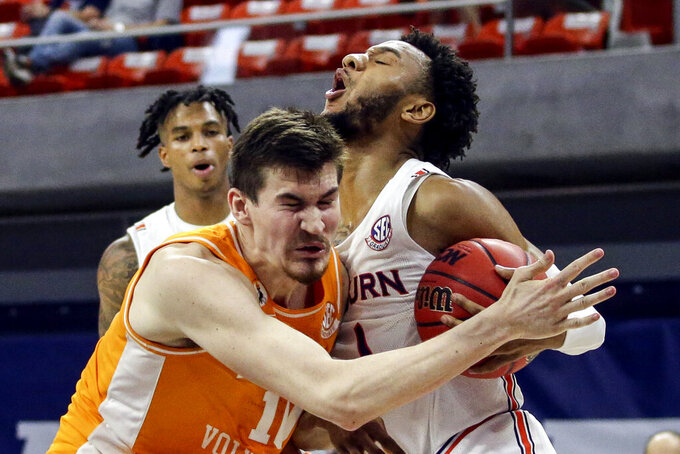 Tennessee forward John Fulkerson (10) and Auburn guard Jamal Johnson (1) collide while rebounding the ball during the second half of an NCAA basketball game Saturday, Feb. 27, 2021, in Auburn, Ala. Auburn won 77-72. (AP Photo/Butch Dill)

Rick Barnes insists that everything the Tennessee Volunteers wanted this season remains available to them with the exception of the Southeastern Conference's regular season title.

Achieving any of those other goals will require the Vols to fix the issues that have turned their season into a roller-coaster.

“We’ve got a chance like anybody else, if we can get it going to the way that we want to and get back to again, almost like it’s a new start for us," Barnes said Tuesday.

After starting 10-1 and ranked sixth nationally, the Volunteers are 6-6 since then. They've split games each week in February since routing Kansas on Jan. 30, which just became the first team to beat No. 3 Baylor. The inability to win back-to-back games dropped them out of the Top 25 on Monday for the first time this season.

“The biggest thing maybe is that we got to get them really believing in themselves again, if that’s what it is,” Barnes said. "I don’t know. I just know it’s a really fine line between winning and losing.”

The preseason pick to win the SEC is led by seniors John Fulkerson and reigning SEC defensive player of the year Yves Pons. With a pair of five-star freshmen, these Vols were seen as being talented and deep enough to make a run at the first Final Four berth in program history.

The freshmen are doing their part.

Jaden Springer leads Tennessee scoring 12.8 points a game, while Keon Johnson is third with 10.7 points. Springer has scored in double digits six of the past seven games, including a career-high 30 against Georgia. Johnson led a rally from 10 down with 12 minutes left at Kentucky by scoring a career-high 27 points.

But Fulkerson has looked nothing like the player who finished last season averaging 18.3 points a game over the final 10 games. The 6-foot-9 senior is averaging 9.3 points a game this season and has topped eight points only twice over the past 11 games.

Barnes said Fulkerson has dealt with sickness and injuries.

“I still believe in John Fulkerson, I do,” Barnes said. “I know that he’s still trying to put the work in to do what he needs to do. He’s still a big part of this.”

Pons ranks fifth in the SEC with 35 blocked shots averaging 1.6 per game, a drop from last season when he led the league in that category.

Tennessee has been too careless with the ball. The Vols rank 95th nationally averaging 12.2 turnovers per game, keeping them from getting in much of a flow offensively. They struggle in the post, tied for 156th averaging 35.7 rebounds a game. They were outrebounded last weekend in a loss on the road to Auburn.

Springer said he felt the Vols' confidence was missing after the loss to Auburn with players needing to lock into basketball and not worry about other issues.

“We just need to find it,” Springer said. “It’s not something you can talk about or do, you just have to have it in you. I feel like if we just lock in over this break, get in the gym and keep practicing it’ll click soon.”

The Vols have time to do try to do that. They're in a weeklong break before hosting Florida (13-6, 9-5) on Sunday to wrap the regular season. The SEC Tournament starts March 10 in Nashville with Tennessee, 9-7 in league play, looking at the No. 5 seed playing on Thursday as the fifth seed right now.

Sophomore Josiah-Jordan James, dealing with an injured wrist, is among the Vols trying to heal up. Barnes said the Vols also must do what they do better, and Johnson said he thinks the Vols have learned a lot this season.

“With postseason coming up," Johnson said, “there’s no more room for error."