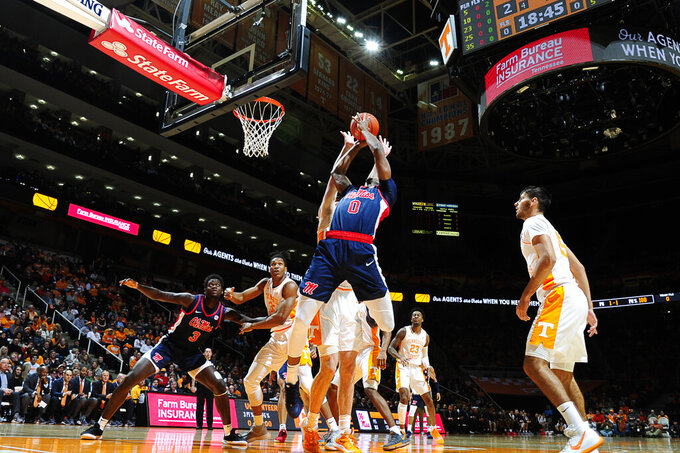 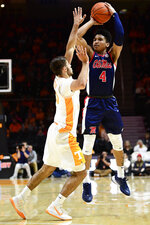 KNOXVILLE, Tenn. (AP) — Tennessee continued its recent surge by playing the stingy defense that has carried the Volunteers for much of the season.

The slumping Mississippi Rebels certainly had no answers for it.

John Fulkerson scored a career-high 18 points and matched a career high with 10 rebounds as Tennessee trounced Mississippi 73-48 on Tuesday night to hand the Rebels their sixth consecutive loss.

“That’s really something we can pride ourselves on,” Fulkerson said. “If shots aren’t falling, we can still lock down defensively. I think we have done a much better job on the defensive end, but I think we still have a long, long ways to go.”

“We got outclassed in every phase,” Ole Miss coach Kermit Davis said.

Ole Miss scored the first four points of the second half to get the margin down to 15, but Tennessee answered with a 12-3 run and never looked back.

The Vols have played particularly good defense in two games since an 80-63 loss at Georgia. Tennessee bounced back by winning 66-45 at Vanderbilt as the Commodores shot 0 of 25 from 3-point range, ending a streak of 1,080 straight games with at least one 3-point basket.

Tennessee followed that up with another dominant defensive performance against Ole Miss.

Ole Miss: The Rebels had played well Saturday in an 80-76 loss to SEC leader LSU, but they couldn’t put together the same kind of performance three nights later. Ole Miss couldn’t shoot all night and also had other issues, as starting forward Khadim Sy played just 12 minutes before fouling out with 9:39 left. The schedule does Ole Miss no favors as it tries to end this skid. The Rebels visit Georgia, host No. 16 Auburn and go back on the road for a rematch with LSU in their next three games.

Tennessee: Yves Pons scored just six points Tuesday night but blocked three shots as he continues to play a big role in Tennessee’s defensive prowess. Pons has blocked a shot in 18 straight games, the longest streak by a Tennessee player since C.J. Black also had a block in 18 straight games from January 1998 to November 1998. Black’s streak spanned parts of two seasons.

Tyree entered the night with an SEC-leading 29.7 points per game in league competition, including a career-high 36 points Saturday in an 80-76 loss to conference leader LSU. But he had just four points by halftime Tuesday and did most of his scoring after Tennessee had built a huge lead.

Tyree was the first Ole Miss player to score at least 25 points in his first three conference games of a season since Joe Harvell did it in 1992.

Tennessee plays at No. 3 Kansas on Saturday as part of the Big 12/SEC Challenge.