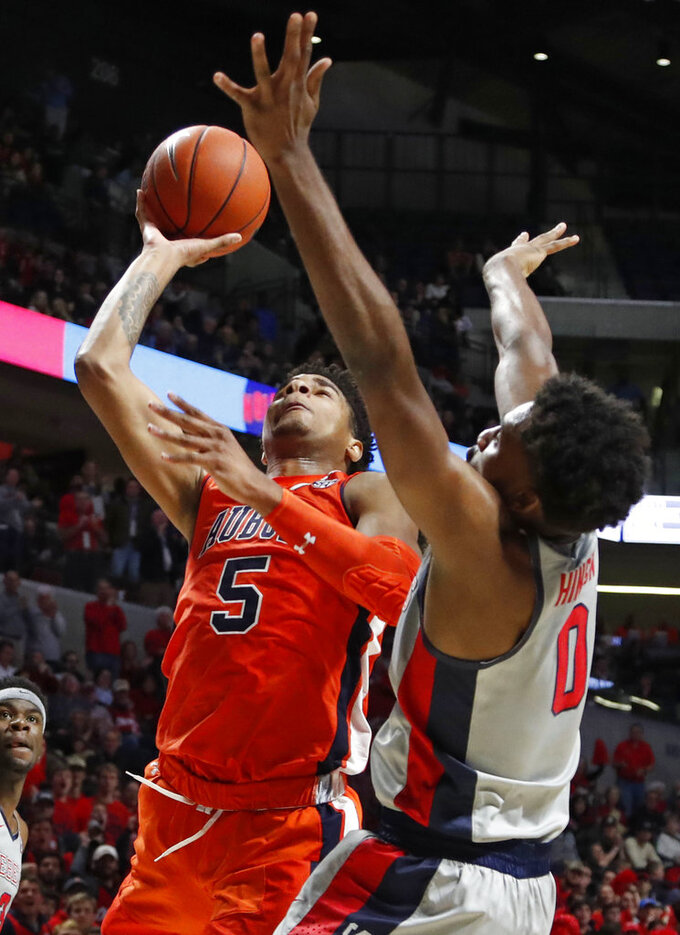 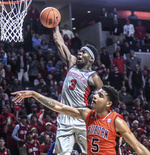 OXFORD, Miss. (AP) — One minute Terence Davis was flying through the air for a vicious dunk, and the next, Devontae Shuler was nailing a clutch 3-pointer before running backward down the court and then strumming an air guitar.

As the highlights piled up and the late lead kept growing, the realization started to sink in: This Mississippi team might be a whole lot better than just about anyone anticipated.

Davis had 27 points and 12 rebounds to lead surprising Ole Miss to an 82-67 upset of No. 11 Auburn on Wednesday night. In the aftermath of the win, the Rebels were understandably happy, but didn't do too much celebrating.

After losing 20 games last season, the Rebels want to prove they're more than just a feel-good, early-season story.

"I don't want to settle for mediocre," Davis said. "I think it's a signature win, but we've still got a ways to go."

Ole Miss (12-2, 2-0 Southeastern Conference) continued its run of strong play under first-year coach Kermit Davis after being widely picked to finish at or near the bottom of the league.

Freshman K.J. Buffen added 16 points for the Rebels while Shuler scored 14. Dominik Olejniczak had 11 points and seven rebounds. But Davis was the star, shooting 9 of 15 from the field and making four 3-pointers.

"It's great for us to see him emerge on a national stage like that," Kermit Davis said. "High talent level. Boy, he finished some athletic balls at the rim tonight."

Auburn (11-3, 0-1) trailed 42-29 at halftime, but pulled within 56-54 with nine minutes remaining. The Tigers could get no closer, with Davis, Buffen and Shuler hitting big shots to keep Ole Miss in front.

"We responded to all of their runs," Kermit Davis said. "That's what good teams do. We kind of got sideways, it went down to three or four (points), but we kept making plays offensively."

The Tigers made just eight baskets inside the 3-point line. Auburn was outrebounded 45-37.

"I thought we had an advantage inside — we didn't," Auburn coach Bruce Pearl said. "And that's something we'll have to improve. But I'm not surprised Kermit has got it turned around this quickly, because he's got a good team."

Ole Miss went on a 10-0 run midway through the first half to take a 25-14 lead and pushed that advantage to 13 points by halftime. Davis led the Rebels with 17 first-half points on 6-of-10 shooting from the field.

Auburn: The Tigers were playing for the first time after an 11-day layoff and looked rusty in the first half. Auburn played better after the break, and Brown nearly singlehandedly kept them in the game with his 3-point shooting, but he finally went cold and the Tigers couldn't keep pace.

"No matter what I tried to do in the last 11 days, there's just no way in practice you can duplicate the physicality and the pace of the game," Pearl said. "It's a long layoff and we looked like it, but that's no excuse. We got outcoached and we got outplayed."

Ole Miss: It was a huge win for the Rebels, who look like a very competitive SEC team through the conference season's first week. At 6-foot-4, Davis had a huge game scoring and on the glass and is going to be one of the Rebels' most important players going forward.

Ole Miss travels to face No. 14 Mississippi State on Saturday.