Terps close in on 1st Big Ten title, with Spartans next 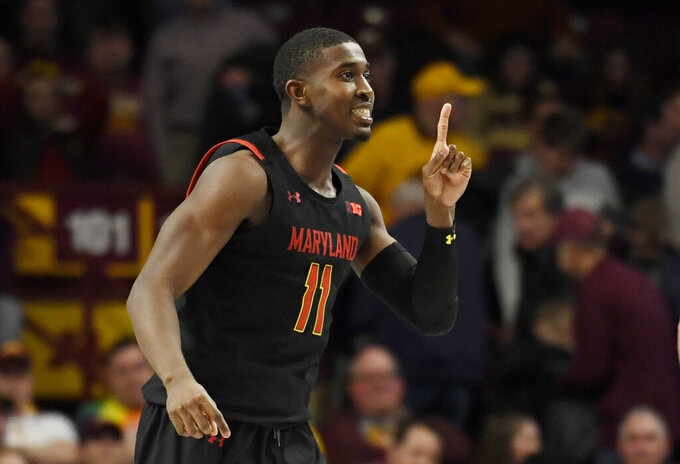 What to watch this week in Big Ten basketball:

GAME OF THE WEEKEND: Michigan State at Maryland, Saturday. The ninth-ranked Terrapins are coming off one of the most remarkable comeback victories in the conference this year — a 74-73 win Wednesday at Minnesota on Darryl Morsell's 3-pointer with 1.9 seconds left after trailing by 14 points with less than nine minutes remaining and eight points with 2:06 to go. They're also 15-0 at Xfinity Center, aiming for the program's first unbeaten record at home since the 2001-02 season that ended with Maryland's lone national championship in the sport. The Terrapins beat the Spartans 67-60 on the road two weeks ago. The matchup pits two of the Big Ten's best point guards — seniors Anthony Cowan Jr. of Maryland and Cassius Winston of Michigan State — and big men — Maryland's Jalen Smith and Michigan State's Xavier Tillman — against each other. Maryland (23-5, 13-4) has a two-game lead on No. 24 Michigan State (19-9, 11-6) with three games left in the regular season. Illinois, Penn State and Wisconsin are in a four-way tie for second place with the Spartans. The Terrapins haven't won or shared a conference regular-season title since tying Duke for first place when they were still in the ACC in 2009-10.

LOOKING AHEAD: All six teams currently ranked in The Associated Press poll face another Top 25 foe this weekend, with No. 16 Penn State taking the court Saturday at No. 18 Iowa and No. 19 Michigan playing Sunday at No. 23 Ohio State. The rest of the action Sunday includes Minnesota at Wisconsin and Northwestern at Nebraska.

PLAYER TO WATCH: Illinois sophomore guard Ayo Dosunmu, who won the most recent Big Ten Player of the Week award, suffered what looked like a scary injury to his left knee Feb. 11 in the closing seconds of a one-point loss at home to Michigan State. Dosunmu had no structural damage, though, and missed only one game. His next appearance was a showstopper, with 24 points at Penn State to spur the Illini's first road win over a conference opponent ranked in the top 10 since 2008. Dosunmu had 18 points Monday in a win over Nebraska and 21 points in a victory over Northwestern on Thursday, putting Illinois in prime position for a top-four finish in Big Ten play and the double bye for the conference tournament that comes with it. Illinois hosts Indiana Sunday.

INSIDE THE NUMBERS: Maryland's highest Big Ten placing was second, in its inaugural season in the league (2014-15). The Terrapins are on track for a fourth top-three regular-season finish in six years. They have yet to advance past the semifinals of the conference tournament. ... Illinois has clinched its first winning record in Big Ten play since 2009-10. The Illini are also closing in on their first NCAA Tournament appearance in seven years. ... Over Indiana's last five games, freshman Trayce Jackson-Davis averaged 19.0 points and 12.0 rebounds in the three wins and just 5.5 points and 3.0 rebounds in the two losses. The Hoosiers are 9-0 when Jackson-Davis posts a double-double. ... The home teams in Big Ten play are just 4-4, after beginning the week at 76-34 for the best mark among the six major conferences.

ON THE WOMEN'S SIDE: Perennial power Maryland enters the final weekend of the regular season in a tie with upstart Northwestern for first place in Big Ten play at 15-2. The 14th-ranked Wildcats host Illinois Saturday, and the seventh-ranked Terrapins play Sunday at Minnesota. Northwestern has the most wins in program history since the NCAA era began in 1980 and has not finished in first place in the conference since 1990. Iowa and Indiana have secured the other two double byes for the Big Ten tournament that begins Wednesday in Indianapolis.