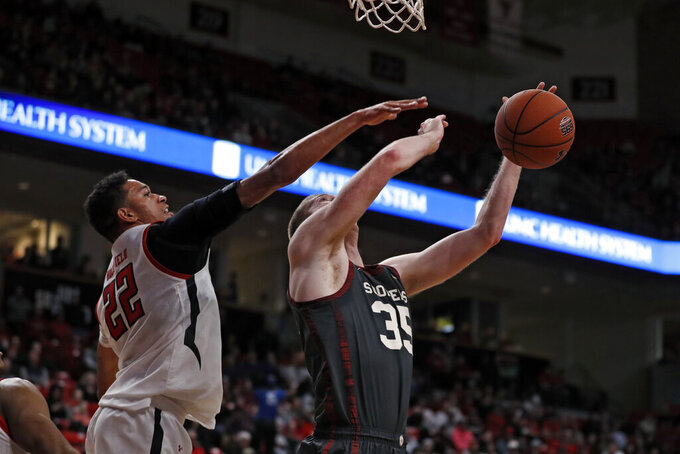 Texas Tech's TJ Holyfield (22) fouls Oklahoma's Brady Manek (35) as he shoots the ball during the first half of an NCAA college basketball game Tuesday, Feb. 4, 2020, in Lubbock, Texas. (Brad Tollefson/Lubbock Avalanche-Journal via AP)

The Red Raiders finally pulled away in the closing minutes to make sure Oklahoma standouts Brady Manek, Austin Reaves or Kristian Doolittle didn't have a chance to beat them with one shot.

After trading baskets and the lead for much of the second half, the Red Raiders won 69-61 after finishing with a 13-5 run Tuesday night. Jahmi'us Ramsey made a tiebreaking free throw with 4:24 left to put them ahead to stay before Davide Moretti hit a 3-pointer and Kyler Edwards made a strong drive into traffic for a layup.

“Defensively, although we were far from perfect, we got more aggressive and more focused,” Beard said. “You gotta understand how good those guys are at one-on-one basketball. So I thought we had an urgency. We were trying to guard in the last eight minutes of the game like there was one minute left in the game."

Reaves hit a 3-pointer with 1:32 left to get the Sooners within 64-61, but they didn't score again as both teams reached the midpoint of the Big 12 schedule. Holyfield then made a jumper with 1:04 left and added two free throws with a half-minute left.

“Coach talked about finishing all this week,” Edwards said. “We tried to do our best finishing the game, getting to the foul line and knocking down free throws and finishing shots.”

Offensively, Beard thought his team “had a nice balance of people finishing the game" with so many different contributors.

“Good battle for the most part,” Oklahoma coach Lon Kruger said. “I thought clearly the difference was they played much better than we did the last two or three minutes."

Ramsey and Edwards had consecutive 3-pointers in a 36-second span to give Texas Tech a 42-41 lead with 15 minutes left. There were then eight lead changes over the next six minutes. Edwards hit a 3-pointer for a 51-49 lead, and the Red Raiders never trailed again though there were three more ties.

Reaves scored the last eight points for Oklahoma, starting with a tying 3-pointer with 4:50 left before Texas Tech's final run.

“Neither team could get much separation," Kruger said. ”I thought a big key was we were up five and they hit back-to-back 3s to take that away very quickly. We didn’t play with that very long or have a chance to widen it out."

Oklahoma: Manek was coming off a 30-point game in a win over Oklahoma State on Saturday when he had a career-high seven 3-pointers. He had gone 20 of 40 from long range his past five games. He was only 1 of 6 on 3-pointers against the Red Raiders, and had only six of his 19 points after halftime.

“Tech’s really good defensively,” Kruger said. “They do a great job and Brady’s been doing a terrific job for us scoring the ball. Got us off to a good start tonight but again he didn’t get as many looks in the second half for sure.”

Texas Tech: The Red Raiders played their first game in nine weeks without them or their opponents being ranked. They had lost three of their last four games, but were also coming off a stretch when they played three consecutive top-15 teams. They lost in overtime to Kentucky, beat West Virginia and lost at Kansas.

There were 17 lead changes and the game was tied 10 times. The largest margin was the final score. Oklahoma's biggest lead was 41-36 early in the second half after a 7-0 run.

Texas Tech plays four of its next six games on the road, starting Saturday at Texas.