Texas Tech comes back for 62-57 win over Texas 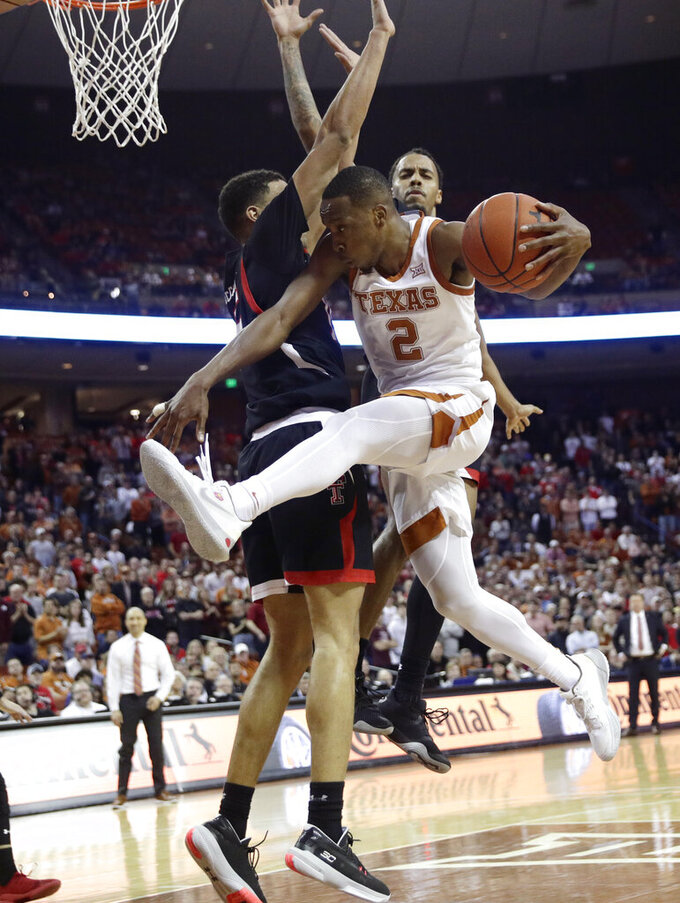 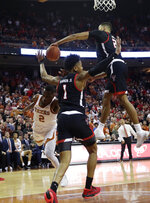 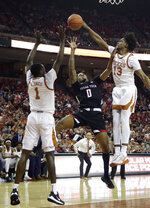 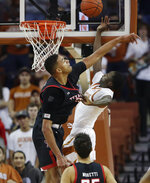 AUSTIN, Texas (AP) — Texas Tech coach Chris Beard said he sometimes roots for players on other teams, the guys he respects most. One of them is Texas point guard Matt Coleman III.

Beard let his own players know how much he appreciates Coleman, and they were ready for him. Tech forward TJ Holyfield blocked driving shots by Coleman three times during the final 27 seconds, and Tech defeated Texas 62-57 Saturday.

Edwards scored all 10 of his points in the second half. Jahmi’us Ramsey led the Red Raiders with 18 points, 14 coming after the break. Terrence Shannon Jr. scored 13. The 6-foot-8 Holyfield made a season-best five blocks.

"I don't know if I have ever been more happy for a defensive play personally,” Ramsey said.

Beard laughed when his freshman guard said that.

"I never thought I'd see the day Jahmi'us Ramsey is talking about defense," Beard said.

Andrew Jones led Texas (14-9, 4-6) with 18 points with Coleman adding 17. Tech limited the 6-9 Jericho Sims, Texas' best low-post scorer, to two points, eight fewer than his average, before he fouled out with 3:16 remaining. He missed with both of his field-goal attempts.

“Even when he did get the ball he wasn't himself aggressiveness wise,” coach Shaka Smart said. “There a couple times when our guards were imploring him to get big and demand the ball, but it wasn't his best day.”

Tech's aggressive drives into the lane were largely responsible for Texas committing 15 fouls in the second half. Tech shot 21 free throws in the half, and Texas had just two,

Tech, which trailed by 16 late in the first half, caught Texas midway through the second half with a 15-4 push. A three-point play by Edwards evened the score.

Texas took a 31-19 halftime lead thanks to a 14-0 run that began with 12 minutes left and lasted nearly six minutes. Jones scored eight of those points and blocked a shot during the stretch. He finished the half with 16 points, including three 3-pointers. Tech committed 11 turnovers in the half, three fewer than it averages for a game, and missed with all five of its 3-point attempts. The Red Raiders had only two turnovers in the second half.

“You have to give our offense credit a lot of credit the second half for taking care of the ball,” Beard said.

Texas Tech: The Red Raiders, who have nine new players on the active roster this season, have the same 6-4 record in the Big 12 they had through 10 games to last year, when they lost the NCAA Tournament championship game to Virginia. Tech won its final nine regular-season games last season. ... After facing TCU in Lubbock on Monday, Tech’s next three games are against the bottom three teams in the Big 12 standings: Oklahoma State, Kansas State and Iowa State.

“I think we are getting better,” Beard said. “Our young guys are growing up.”

Texas: The Longhorns, hoping for an NCAA Tournament bid after missing last season, needed this game badly, considering that it was at home, and that their next one, also in Austin, is against No. 1 ranked Baylor on Monday.

“Today was an emotional game,” Smart said. “There were guys who were really, really upset after the game. Obviously in this league you get a lot of really good opportunities. Monday will be that.”

The Longhorns lost two starters to injuries early in the second half, Kai Jones (left ankle) and Jase Febres (left knee). Smart said he did not have a status update on either player. He said Febres appears to have hyperextended the knee and will have an MRI, and that Jones landed on somebody's foot and turned the ankle.

Texas Tech was 26th in points on Monday, but with two wins since the poll was released, the Red Raiders are in a position to become ranked again after a one week-absence. Before dropping out of the Top 25, Tech was ranked for six straight weeks.