Texas Tech rebounds with 89-81 win over No. 12 West Virginia 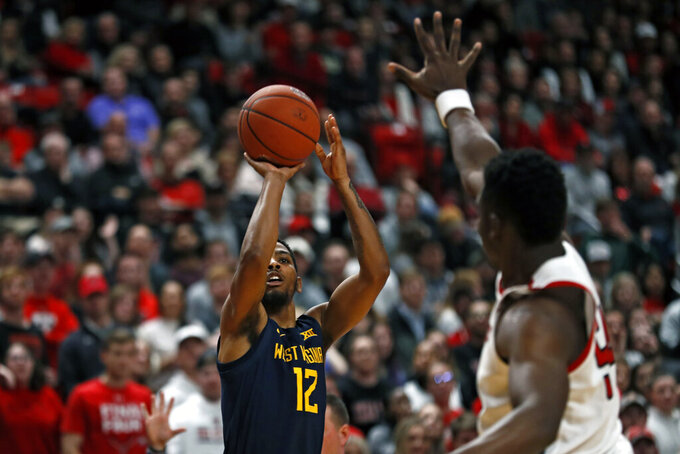 “We had to bounce back,” Davide Moretti said.

“We get testy every afternoon at 3:30 in Lubbock, Texas,” coach Chris Beard said. “We strap it on. That’s what we do. All sorts of things to be concerned about when you’re playing West Virginia, but the testiness of it wasn’t an issue tonight."

Moretti had a career-high 25 points and a pair of Texas Tech freshmen also scored more than 20 in an 89-81 win over the physical Mountaineers on Wednesday night.

“We didn’t take away anything that we actually talked about, practiced, drilled," Mountaineers coach Bob Huggins said. “When you don’t do that against Chris (Beard’s) teams you’re going to pay for it. They’re well-coached and made shots. We didn’t."

Derek Culver had 16 points, with 14 made free throws, to lead five players scoring in double figures for West Virginia (16-4, 4-3). Gabe Osabuohien had 15 points, while Taz Sherman had 11. Jermaine Haley and Miles McBride each had 10

After Shannon got a technical foul early in the second half for a slight shove of Culver under the basket following a whistle on a shooting foul, the Mountaineers made two of the four free throws and kept possession before Haley was fouled and then made both free throws to cut the deficit to 44-42.

But Ramsey then made a 3-pointer, and by time he hit another with 16:14 left, Texas Tech had stretched its lead to 56-46. The Red Raiders led by as many as 15 while scoring the most points any team has had against the Mountaineers this season.

“This was obviously a hard-fought win,” Beard said. “It was everything we expected from West Virginia, one of the most physical teams in college basketball. Above all, I thought our guys responded."

Ramsey had worn a protective mask pretty much since he broke his nose when being hit in the face during AAU competition the summer before his senior year in high school.

Texas Tech freshman guard Kevin McCullar missed the game while still in concussion protocol. He finished Saturday's overtime game against Kentucky after a hard fall in the first half when his head hit the floor twice when taking a charge — after initially getting knocked down, then again when the opposing player then fell on top of him.

Beard said McCullar was completely cleared at halftime Saturday, and his parents and doctors were involved in the decision for him to return.

“What a courageous second half against Kentucky, and then the next morning a headache or two,” said Beard, adding that McCullar is improving.

BIG PICTURE West Virginia: The Mountaineers were flustered early on after being forced into some turnovers. A lack of perimeter defense hurt them in the long run. Texas Tech hit 11 of 17 3-pointers and shot 54% overall after making only 28% of its field goal attempts in a 12-point loss at West Virginia 2 1/2 weeks ago.

Texas Tech: A good bounce back for the Red Raiders four days after they overcame a 10-point deficit before losing in overtime at home to SEC powerhouse Kentucky. They dropped out of the AP Top 25 this week after being ranked the previous six polls. ... The “glaring thing” to Beard was their 22 turnovers. “We understand it’s an issue and we’re working really hard to try to improve it,” he said.

Texas Tech is on the road to play its third consecutive Top 25 opponent, at No. 3 Kansas on Saturday.