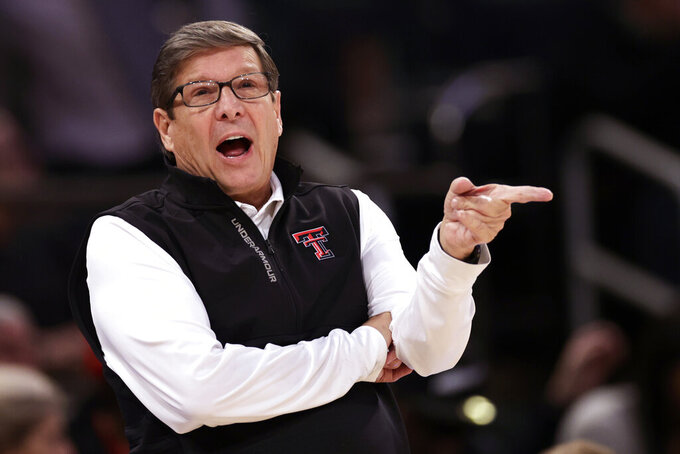 Texas Tech coach Mark Adams gestures during the first half of the team's NCAA college basketball game against Tennessee in the Jimmy V Classic on Tuesday, Dec. 7, 2021, in New York. (AP Photo/Adam Hunger) 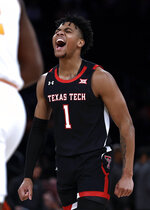 NEW YORK (AP) — Texas Tech might want to petition to play in the Jimmy V Classic every season. The unranked Red Raiders make a habit of rankling the ranked teams in New York.

Terrence Shannon, Jr. had 18 points and 12 rebounds, and Texas Tech continued its run of Jimmy V Classic shockers in an offensively anemic 57-52 overtime win over No. 13 Tennessee on Tuesday night.

“In OT, we knew the tougher team was going to win,” Shannon said.

The Red Raiders (7-1) were also unranked when they knocked off No. 1 Louisville in 2019 at Madison Square Garden.

Tuesday's game was classic in title only. Want offense? You wouldn't find it at MSG, where the Vols (6-2) missed a whopping 34 of 40 3-pointers overall and shot only 27% overall from the floor. John Fulkerson led the Vols with 10 points. The Vols went 8 for 16 from the free-throw line.

“I don’t know if we can be any worse on offense and we were in the game,” coach Rick Barnes said. “One or two more and maybe we would have got the lid off it it.”

Those one or two makes never became the three or four needed for a run to possibly hold off the Red Raiders.

Tennessee missed 14 straight shots over a 10-minute stretch in the second half and had missed 27 3-pointers until Santiago Vescovi buried the tying 3 with 1:55 left to make it 41-41. Josiah-Jordan James hit another tying 3 with 31 seconds left and sent the game into overtime tied at 44.

With that, fans in place for the second game of the night (Villanova vs. Syracuse) erupted in boos as the already late start would be delayed.

They booed again when Vescovi sank another clutch 3 with 1.2 seconds to go in OT and cut it to 55-52. It wasn't enough for the Vols.

Through the first 13 minutes of the second half, the Vols had scored just 12 points and the Red Raiders 10. Tennessee missed 20 of its first 23 3-point attempts overall.

Tennessee fans stood and gave a sarcastic ovation when one free throw brought the Vols within one with 4:12 left headed into a timeout. Yes, a single free throw counted as an offensive explosion in this one.

James then slipped, comically missed a fastbreak dunk attempt and Texas Tech came right back and scored on the other end for a 41-38 lead.

“We got a lot of good looks,” James said. “I think in the second half, we got everything we could have asked for as far as looks.”

Texas Tech runs a rebounding drill in practice where it covers the rims so all the attempts are misses. Who packed the lids for New York?

The Red Raiders survived their own offensive ineptitude (19 for 61 overall with just four 3-pointers) pull off another Top 25 win at the Garden.

Texas Tech made 15 free throws and used a decided advantage on the boards (three players in double figures) to rebound from its first loss of the season against Providence.

“I feel like it puts us back in the right direction,” Shannon said.

Tennessee: Should drop a few spots in the AP Top 25 poll. The Vols shot 5-for-28 from 3-point range in an 18-point loss last month to Villanova, and can’t expect to go deep in March without significant improvement from the arc.

Texas Tech: Received votes in this week’s AP Top 25 poll and could earn a few more with the win. Texas Tech wasn’t exactly challenged early in coach Mark Adams’ first season. Shannon scored 11 points — two shy of his total when the Red Raiders knocked off Louisville -- and sparked the Red Raiders to a 29-25 halftime lead.

ESPN announcer Dick Vitale was not at the Jimmy V Classic for the first time since its inception in 1995, though there were oversized cutouts of Vitale’s head left on seats.

Vitale, who is battling lymphoma, wrote on ESPN.com that he has bloodwork scheduled this week that could decide if he’s healthy enough to call the Villanova-Baylor game on Saturday.

“My team is very optimistic, and I am praying they are right again,” Vitale wrote. “Meanwhile, the challenge to win this battle for all cancer patients never, ever stops and continues with Tuesday’s Jimmy V Classic being played again in the name of my great friend, the late Jim Valvano.”