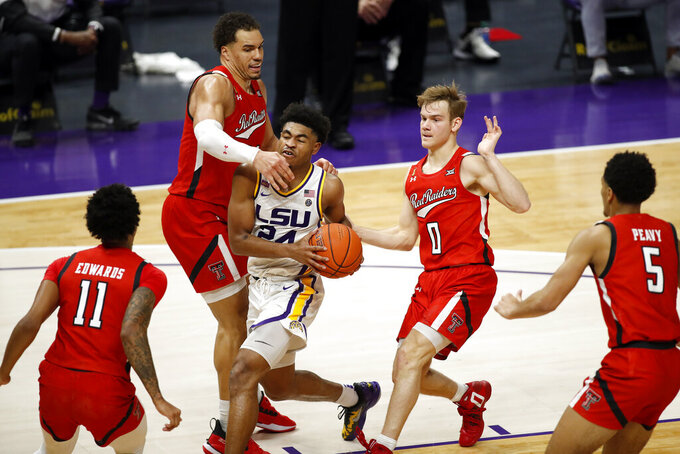 Trailing by seven points with a minute remaining, the Red Raiders scored 12 consecutive points to come away with a 76-71 victory in the SEC/Big 12 Challenge on Saturday.

Texas Tech had played five Big 12 games decided by fewer than three points or in overtime.

“Even if something doesn’t go our way at the end, you are still proud of the fight,” Texas Tech coach Chris Beard said. “You are still giving yourself a chance by playing it to the bone. You just got to keep putting yourself in this position.

Mac McClung, who had not made a field goal in the second half, ignited the comeback by the Red Raiders (12-5). He made two 3-pointers sandwiched around a missed free throw by Josh LeBlanc to move Texas Tech within 71-70 with 31 seconds to play.

Terrence Shannon had a steal and score after McClung’s second 3-pointer to put the Red Raiders ahead 72-71 with 27 seconds left. On LSU’s next possession, Cam Thomas missed a shot and Trendon Watford committed a foul going for the rebound.

Shannon put the Red Raiders ahead by three points by sinking two free throws with 16 seconds remaining. Thomas missed another 3-point shot for the Tigers with two seconds left and Shannon sealed it with two more foul shots with one second left.

“This is college basketball,” McClung said. “Every night is a difficult night. You have to close out games. We did that today against a big, athletic SEC team.”

Shannon had 23 points and 10 rebounds, McClung added 22 points, and Kevin MuCullar had 10. Marcus Santos-Silva grabbed 12 rebounds to go along with six points.

Javonte Smart matched his career high with 29 points for LSU (11-5). Thomas finished with 25 points. Darius Days had 11 points before leaving the game with a knee injury in the second half.

“We played extremely hard,” LSU coach Will Wade said. “We just didn’t have some poise and some discipline we needed in key stretches, especially in the last minute. We played well enough to win against a very good ballclub. We couldn’t close it out.”

LSU held the lead for most of the first half, but Texas Tech was down by only 33-32 at the break. The Red Raiders outscored the Tigers 8-2 over the last three minutes to cut into a seven-point deficit. McClung scored 14 first-half points to keep Texas Tech close throughout the opening 20 minutes.

The Red Raiders got off to a quick start in the second half. After falling behind by six points, Texas Tech answered with an 11-2 run. Three-pointers by Kyler Edwards and Shannon helped the Red Raiders go ahead 45-42 with 14:39 remaining in the game.

Both teams took turns taking the lead over the next seven minutes. The Tigers had a three-point advantage at 48-45, while Texas Tech also had a three-point lead at 56-53. A basket by Smart tied the score at 58-58 with 7:33 remaining.

Trailing 60-58, LSU scored eight consecutive points – two foul shots by Thomas and two 3-pointers by Smart – to go ahead 66-60 with 4:33 to play. The Tigers maintained that margin until the final 60 seconds.

LSU: The Tigers have now dropped three of their past four games, including back-to-back home defeats against nationally-ranked Alabama and Texas Tech.

No team may be more battle-tested for tight games in the NCAA tournament than Texas Tech. Since mid-December, the Red Raiders have been involved in six games decided by fewer than six points. Texas Tech has three close road victories against Oklahoma (69-67), Texas (79-77) and LSU (76-71). The Red Raiders were beaten at home by Kansas (58-57) and Oklahoma State (82-77 in overtime). Last Monday, Texas Tech lost a late lead and fell at West Virginia 88-87.

Smart and Thomas provided almost all of LSU’s scoring with a combined point total of 54 points. Smart was 12 of 18 from the field while finishing with 29 points. Smart had 29 points as a freshman against Tennessee two seasons ago. Thomas, who missed two shots in the last 25 seconds, was just 6 of 20 on field goals. Trendon Watford, who was averaging 18 points, had only four. Darius Days had 11 points and nine rebounds when he left the game with a knee injury midway through the second half. The rest of the Tigers scored two points.

LSU: At SEC-leading Alabama on Wednesday.