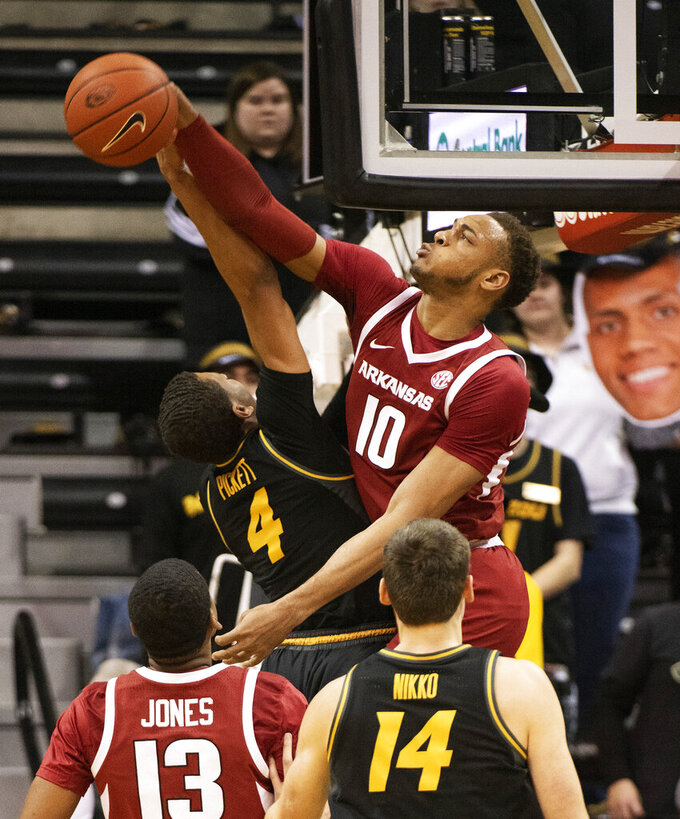 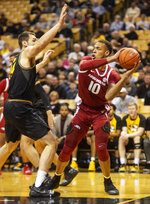 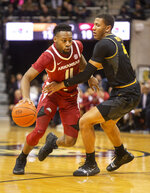 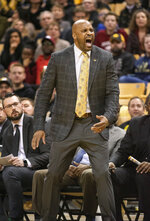 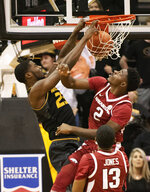 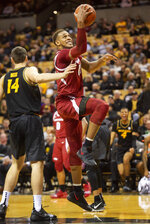 COLUMBIA, Mo. (AP) — With 17 seconds remaining in Missouri's game against Arkansas on Tuesday night, Razorbacks' forward Daniel Gafford slammed home a dunk off an alley-oop to cut the Tigers' lead to just one point. Missouri guard Xavier Pinson committed a push-off foul on the ensuing possession and Arkansas had a chance to win the game on the final possession.

This was familiar territory for Missouri, which had blown second-half leads in two of its prior three home contests.

Instead, Missouri forward Jeremiah Tilmon and the Tigers locked down on defense and Missouri squeaked by Arkansas 79-78.

Tigers coach Cuonzo Martin said they were preparing for another play to Gafford.

"The first thing we talked about is just not allowing the lob pass," Martin said. "When they got the ball to the point guard, our guys were expecting that play. Jeremiah did a good job switching."

Tilmon forced Razorbacks guard Jalen Harris to throw up an off-balanced shot and the ball was tipped back to Tilmon as time expired.

"It feels good to win, period," Tilmon said. "This time, we held the lead. We've got to continue to build off of taking care of the ball at the end of the game."

Tilmon led Missouri (12-11, 3-8 Southeastern Conference) with 21 points. Senior Jordan Geist contributed 18 points as the Tigers avoided falling below .500 for the first time since Cuonzo Martin took over as head coach at the beginning of last season.

Missouri erupted for 46 points in the first half, eclipsing their previous season high of 45 against Morehead State on Dec. 29.

"I thought the first half probably ended up being the difference in the game," Arkansas coach Mike Anderson said.

Arkansas shot 47 percent from the field. The Tigers won the turnover battle 12-11 and outrebounded Arkansas 39-33.

Arkansas: The Razorbacks had a chance to win, but instead it turns into a loss that will hurt their NCAA Tournament chances.

Missouri: The Tigers have struggled to maintain leads recently, so holding off Arkansas' comeback attempt was a step in the right direction. Missouri is still off the radar in terms of NCAA Tournament hopes.

Arkansas had won four consecutive conference games prior to losing on Saturday against South Carolina and again versus Missouri. Anderson said the two losses came down to the team's inability to finish.

"You saw it, finishing," Anderson said. "We're mounting a comeback. The key is you've got to be able to make plays. And we didn't."

Entering Tuesday night's contest, Missouri had allowed fewer than 70 points in all 11 of their victories. In giving up 78 points, the Tigers relied on their offense to carry them over the top in this one.

Arkansas freshman guard Isaiah Joe drilled four 3-pointers in a 17-point performance against Missouri. A 3 in the beginning of the second half gave Joe his 84th triple this season, a record for Arkansas freshmen. The previous record-holder was Rotnei Clarke, who knocked down 83 3-pointers in the 2008-09 season.

Missouri hits the road to take on Mississippi on Saturday.