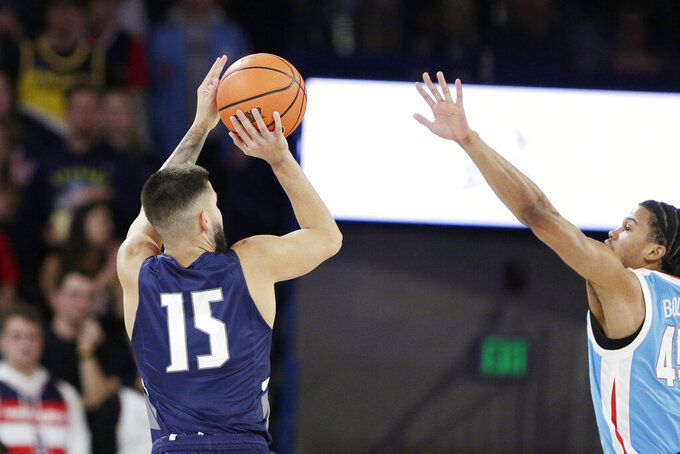 SPOKANE, Wash. (AP) — North Florida took a 10-8 lead early against No. 2 Gonzaga, but that just seemed to ignite Drew Timme and the Bulldogs.

Gonzaga went on a 26-0 run, helped by eight North Florida turnovers, to build a big lead they never relinquished.

“That's as good a stretch as we've had all year,” Coach Mark Few said after Gonzaga posted a 104-63 victory in the season opener for both teams. “We got our hands on a lot of balls.”

“We played with great intensity,” Few said, adding that North Florida is a team that can score a lot.

Timme, a player of the year candidate, led all scorers with 22 points, Julian Strawther added 16 and six Zags finished in double figures.

“I think he was terrific in the first half,” Few said of Watson. “He got us going and made a lot of plays.”

The Bulldogs, who have led the nation in scoring for four consecutive seasons, shot 63% in the game while holding the Ospreys to 36%.

“You can't let someone go on a 26-0 run,” North Florida coach Matthew Driscoll said. “We had too many turnovers that led to easy baskets.”

Transfer Malachi Smith had seven points during the big Gonzaga run and finished with 15.

“Malachi is getting a little more comfortable out there and getting more assertive,” Few said.

The Bulldogs closed the first half with an 11-2 run, holding North Florida without a field goal for the final 4:30, to take a 53-23 halftime lead.

Gonzaga shot 65% in the first half, led by Timme's 16 points, while the Ospreys shot 28%. North Florida committed 13 turnovers in the first, which Gonzaga converted into 20 points.

Rasir Bolton hit a pair of 3-pointers as Gonzaga pushed its lead to 71-34 with 15 minutes left in the game. North Florida did not threaten again.

North Florida: The Ospreys were picked to finish fifth in the A-SUN coaches’ poll. They finished 11-20 last season, 7-9 in the league. North Florida also faces No. 3 Houston and No. 4 Kentucky this year.

Gonzaga: The Zags largely succeeded in avoiding the rough second half performances that showed up in exhibition games against Tennessee and NAIA Warner Pacific. They have won 18 consecutive regular-season openers.

Gonzaga plays Michigan State on an aircraft carrier in San Diego on Friday.