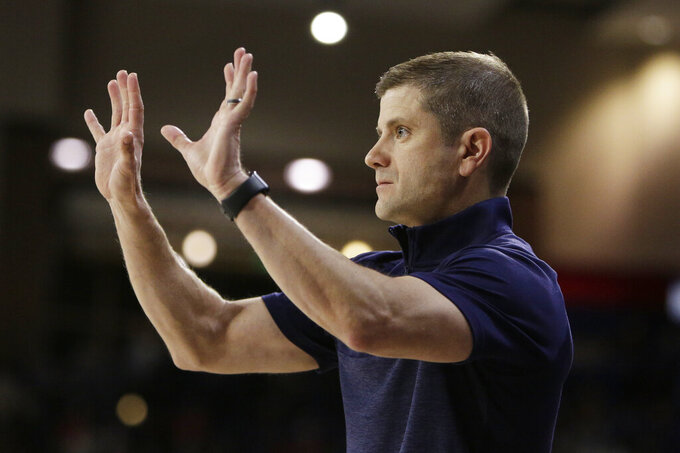 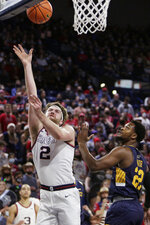 Freshman center Chet Holmgren had 15 points and 15 rebounds, and Julian Strawther added 15 points for Gonzaga (8-2), which has won 57 consecutive home games — the longest streak in the nation and a program record.

“I thought our defense was much better in the second half," coach Mark Few said after his team held the Warriors to 25% shooting and 24 points after halftime.

Jordan Minor scored 17 points and Ziggy Reid had 16 for Merrimack (4-7), which is in the third season of its transition to Division I and was playing a ranked opponent for the first time.

The scrappy Warriors kept it close during the first half.

Holmgren had a 3-pointer and a stuff and Strawther added a 3 as the Zags scored the first eight points of the second half to take a 50-31 lead.

Holmgren and Strawther each hit a 3 and the Warriors missed nine straight shots as the Bulldogs pushed their lead to 62-36 with 12 minutes left.

Merrimack was undone by 32% shooting and was outrebounded 56-20 for the game.

Few, however, pointed to Gonzaga's 17 turnovers.

“We're still turning the ball over a lot,” he said, and credited Merrimack's unusual 2-3 zone defense. “They are difficult to prepare for.”

Merrimack coach Joe Gallo said he was proud of his team for not being “wide-eyed” against the Zags.

“Gonzaga is a really good team and you don't know truly how good they are until you play them," Gallo said.

Gallo thought his team gave up too many transition baskets, though.

“We missed a lot of shots that turned into easy points for them,” he said.

Gonzaga has spent the past 100 weeks in the AP Top 25, the longest current streak in the nation, and isn't likely to fall out any time soon. Villanova is second with 44 consecutive weeks in the poll. Gonzaga has appeared in every poll dating to 2017.

In addition to his 15 points and 15 rebounds, the 7-foot Holmgren blocked four shots, had three assists and four turnovers. “Chet was doing a nice job protecting the rim,” Few said. Merrimack did not block a single Gonzaga shot.

Merrimack: The Warriors, from North Andover, Massachusetts, have lost four straight since beating Hartford. Merrimack has no starters taller than the 6-foot-8 Minor, who leads the team with 14 points per game, and had a significant size disadvantage.

Gonzaga: The Bulldogs came in having lost two of their previous three games, to then-No. 3 Duke and Alabama, which jumped from No. 16 to No. 9 after beating the Zags. Gonzaga has played four teams ranked in the top 10 this season, earlier beating No. 4 UCLA and No. 7 Texas.

Merrimack plays at Indiana on Sunday.

Gonzaga's scheduled game Sunday against Washington was canceled because of COVID-19 issues within the Huskies' program. The Bulldogs next play Texas Tech in the Jerry Colangelo Classic in Phoenix on Dec. 18.

Few said Gonzaga might try to schedule a game before facing Texas Tech.