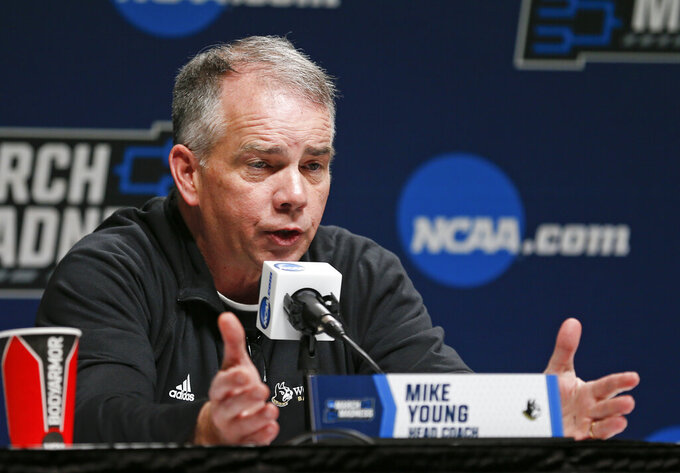 RALEIGH, N.C. (AP) — The first teams will earn their spot in the NCAA Tournament's Sweet 16 on Saturday — and the upstarts are right there near the front of the line.

There are eight double-digit seeds left in the field of 32 entering the second round, three of those coming from outside the power conferences: No. 12 seeds Murray State and Liberty, and No. 13 UC Irvine.

And then there's Wofford, the headliner in a batch of schools aiming to make their own enduring March Madness moment with a marquee matchup against Kentucky.

That game comes Saturday in the Midwest Region, along with Murray State's date with Florida State in the West bracket in an eight-game schedule. And make no mistake: there's plenty of belief for a pair of teams that haven't lost a game in months.

"You don't want to get out of character and try to do things that you can't do or do things that you're uncomfortable doing just to try to show that you can do something," Wofford guard Fletcher Magee said. "We want to stay within ourselves, play our game, and we feel that if we do that, we can be right there and we can compete with them."

Murray State (28-4) rolled in its first-round game behind Ja Morant, who had a hello-national-audience performance with 17 points, 16 assists and 11 rebounds in a rout of fifth-seeded Marquette.

That was the Racers' 12th straight win. They haven't lost since falling to Jacksonville State on Jan. 31.

Morant (24.4 points, 5.7 rebounds) leads the country with 10.2 assists per game, and the Racers have three other double-figure scorers. The biggest challenge will be handling Florida State's size and length.

"We know Ja will get all of the attention," said Shaq Buchanan, averages 13.1 points. "Like, it's amazing, but at the same time, we know how to handle that. And we know everybody's going to be keyed in on him (Saturday), so we just going to make plays for him like we did against Marquette."

As for Wofford, the seventh-seeded Terriers (30-4) have been a popular pick. All four losses came against power-conference teams that made the NCAA Tournament and they have won 21 straight games since falling to Mississippi State on Dec. 19.

The Southern Conference champions, who rolled past Seton Hall in the first round, entered the tournament ranked No. 13 in the NCAA's new NET rankings — ahead of names like LSU, Auburn and Kansas — after claiming their first AP Top 25 ranking in program history.

"I can't imagine a team more confident, and that's earned," Wofford coach Mike Young said, adding: "They may whip our tail, but it will not be because my kids are scared. They'll come out ready to fight."

Here are some of the other storylines for Saturday's schedule:

Gonzaga has been waiting for Killian Tillie to look healthy.

The 6-foot-10 junior had a season-high 17 points on 7-for-8 shooting in the first-round rout of Fairleigh Dickinson for the top-seeded Zags, who face No. 9 seed Baylor in the West Region.

Tillie had been sidelined into January with a foot injury, then reinjured his foot and didn't return until the West Coast Conference Tournament. Now he's another weapon for a team that leads KenPom's adjusted offensive efficiency rankings (125.4 points per 100 possessions).

"It makes us much more versatile," Zags coach Mark Few said, adding: "He's got an incredible feel for the game and basketball intuition."

It's been a while since reigning national champion Villanova was a lower seed playing to pull an upset.

The sixth-seeded Wildcats face No. 3 seed Purdue in the South Region's only game Saturday and they are 3 1/2-point underdogs. It will be the first time the Wildcats have played a higher seed before the Final Four since beating top-seeded Kansas in a 2016 regional final on the way to coach Jay Wright's first national championship.

Villanova had been a No. 1 or No. 2 seed for five straight tournaments.

It's not ideal, but the Big Ten has a second-round East Region matchup with No. 2 seed Michigan State and 10th-seeded Minnesota. The Spartans won the only meeting in February, and the rematch will cost the Big Ten one of its seven teams still alive in the tournament.

"However the NCAA Tournament does the seeds and the matchup is how they do it," Minnesota's Amir Coffey said. "We have no control over that. We just have to be ready for whoever we are matched up against."

THE REST OF THE SCHEDULE

The schedule includes another 2-vs-10 matchup in the West with Michigan against Florida, respectively. In the East, third-seeded LSU meets sixth-seeded Maryland. And in the Midwest, there's an intriguing matchup between fourth-seeded Kansas and fifth-seeded Auburn — two teams that have experienced wild swings in their seasons.

Kansas was preseason No. 1 in the AP Top 25 yet dealt with a series of injuries and off-court issues that have left coach Bill Self with a very different roster. Meanwhile, Auburn peaked at No. 7 in December, fell out of the rankings, then made a late-season surge to win the Southeastern Conference Tournament.